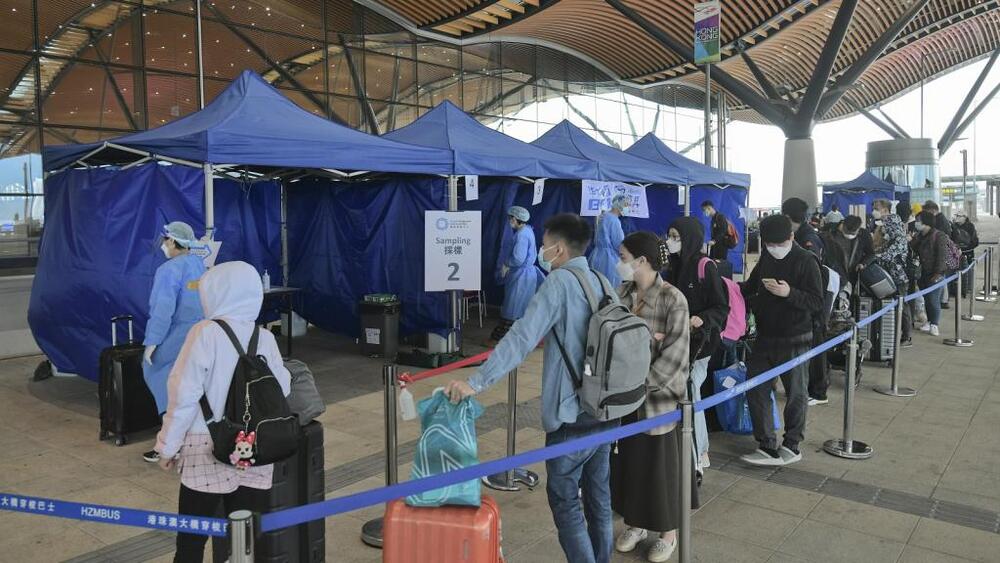 Hong Kong reported 1,447 new Covid-19 cases on Wednesday, as health authorities said the abnormal test results involving 136 people at Hong Kong-Zhuhai-Macao Bridge (HZMB) were being investigated.
Among the new cases, 1,323 were locally transmitted, including 583 confirmed via PCR tests and 740 verified positive RAT results. The other 124 infections were imported cases, of which 74 were detected at the airport.

Testing contractor Sunrise Diagnostic Centre reported yesterday that 136 outbound travelers tested positive or indeterminate at the Hong Kong port of HZMB. These people were, therefore, not allowed to leave the city according to existing arrangements.

After forwarding the 136 samples with non-negative results to its central laboratory, the center today returned only three tested positive and nine indeterminate.

The center suspected that the laboratory at the port might have been contaminated, resulting in abnormal test results.

Chuang said health authorities have instructed the center to disinfect the laboratory and related equipment immediately and to resume normal operation of the laboratory today.

The center was also required to conduct an in-depth investigation, and submit a full report as soon as possible within this week.

Chuang noted that a total of 190 cases were reported by 165 schools, including 159 students and 31 teachers.

In addition, St Stephen's College added three more cases, involving other rooms in the same dormitory. A total of 9 cases were detected on the floor with 61 students.

The city added seven more BA.2.12.1 cases, of whom five were cases with unknown origin. Another suspected local BA.4 or BA.5 case worked at airport Fedex Express. He undergoes rapid tests every day and tested positive on June 18.

The deceased was a 64-year-old woman who had lung cancer and received two doses of vaccines.

Public hospitals and treatment facilities are now housing 509 patients. Among them, 15 are in critical condition, 10 in serious condition and three in intensive care.
#Vaccines  #COVID-19  #Covid
Add Comment