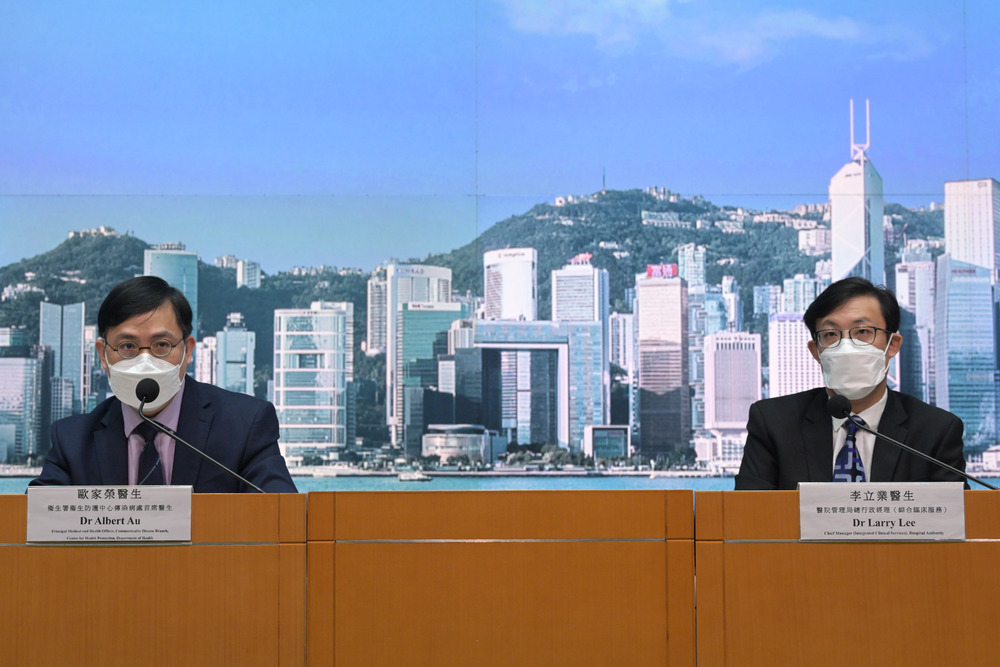 Hong Kong saw its daily infection caseload hit four digits again after reporting 1,047 infections on Wednesday, while health authorities stressed the rebound in figures was within their expectation.
Among the new infections, 971 were locally transmitted, including 477 confirmed via PCR tests and 494 self-declared positive RAT results.

The remaining 76 cases were imported from overseas -- 35 detected at the airport, 31 at quarantine hotels, and 10 patients who finished seven-day isolation and entered communities.

Au noted that there is no proof that the numbers will escalate exponentially and highlighted herd immunity has been achieved in local communities. He also said the numbers of critical cases and deaths remain at a normal range, although more cases are reported and called on citizens to receive their Covid shots on time.

A total of 147 cases were reported by 127 schools, involving 135 students and 12 teachers and staffers.

A 17-year-old secondary five student from Pui Ching Middle School in Ho Man Tin was infected with the Omicron subvariant BA.2.12.1. She once attended a gathering at Gourmet Hotpot on Peace Avenue alongside over 60 classmates and five teachers.

Five other students at the gathering caught Covid as well, including three who sat at the same table as the 17-year-old. The other two sat at different tables, and the cluster reported six infections at this point.

Ten other classmates who dined beside the infected students were listed as close contacts, and the school will have to suspend classes until this coming Sunday (Jun 19).

Lee continued that the woman suffered from coronary heart disease, liver disease, psychosis, and intracerebral hemorrhage. Lee added she tripped over and was admitted to a hospital last Tuesday last week, believing her death had nothing to do with Covid.

Lee pointed out that public hospitals and treatment facilities house 412 Covid patients. Sixteen are in critical condition, six are in serious condition, and four are in intensive care. Another 48 patients have recovered from Covid and been discharged in the past 24 hours.
#Covid
Add Comment