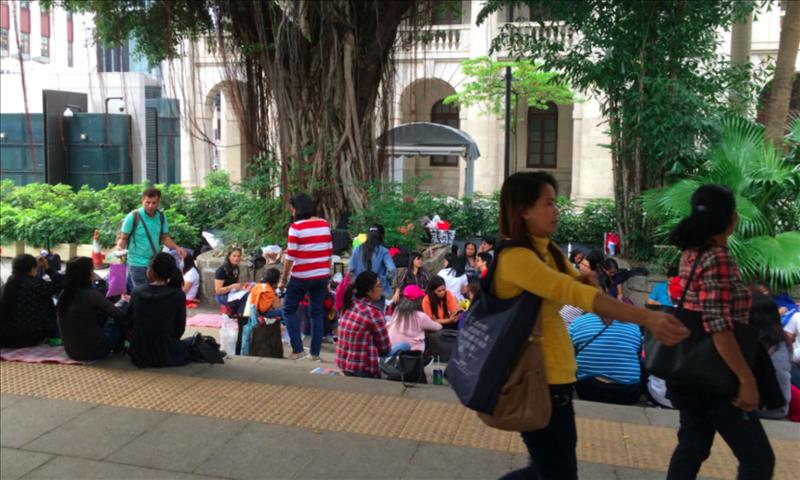 About 340,000 domestic workers in Hong Kong will be required to get tested for the coronavirus again after three infected helpers were found after the first round of testing between May 1 and 9, but they will not be forced to have vaccinations.

''We hope we won''t find any new patients among domestic workers in the second round of testing,'' Chief Executive Carrie Lam said in a media briefing before the weekly Executive Council meeting. She added that the new round of testing was aimed at cutting off all transmission chains in Hong Kong.

Lam said the testing order, which would not apply to those who are fully vaccinated, was expected to be issued on May 15. She said domestic workers would have to undergo the test by May 30 as a precaution.

She also announced that the government had dropped its plan to make domestic workers get Covid vaccinations before they could renew their working visas.

''After assessing public health needs and the fact that vaccination is voluntary in other countries … as well as legal issues that we may face if vaccinations are made mandatory, we will not make vaccinations mandatory when foreign domestic helpers make their visa applications,'' she said.

On April 30, the government ordered all 370,000 foreign domestic workers in Hong Kong to get tested by May 9 after two were infected with a mutated coronavirus in a week. It said it would amend the law to require domestic workers to get vaccinated before they could renew their working visas in Hong Kong.

In the first nine days of this month, nearly 340,000 helpers were tested, while about 40,000 had received two Covid vaccine shots and were exempt.

Health officials later found that all eight variants – including a 29-year-old Indian engineer from Dubai – could be linked as those infected had met directly or indirectly at private parties.

More than 2,000 people had been sent to quarantine as they were living in the buildings where the eight infected persons resided.

Last Saturday, the Indian man and his Filipino girlfriend were arrested and charged with providing misleading and insufficient information to health officials. They were accused of trying to cover up for their friends who had been to the parties. 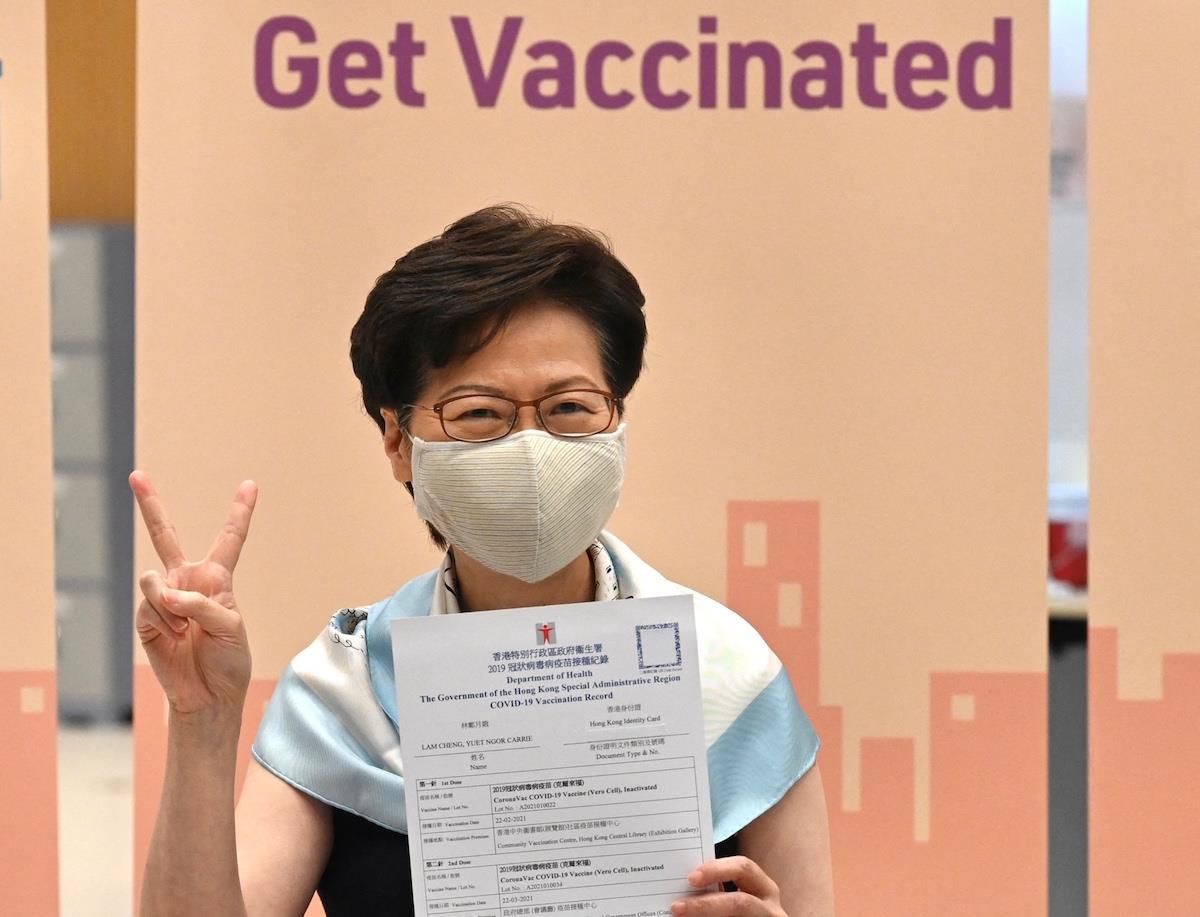 People who have been released from the quarantine camps at Penny's Bay over the past few days complained that the food and environment in the camps were horrible. They said they could not seek medical care and were left without basic necessities. Some said they were poisoned by the food provided.

In a picture posted on a Facebook , a quarantined person said he was given a piece of minced meat with some corn kernels on top, but claimed it tasted like plastic. The catering company was later found to have caused food poisoning at a primary school two years ago. 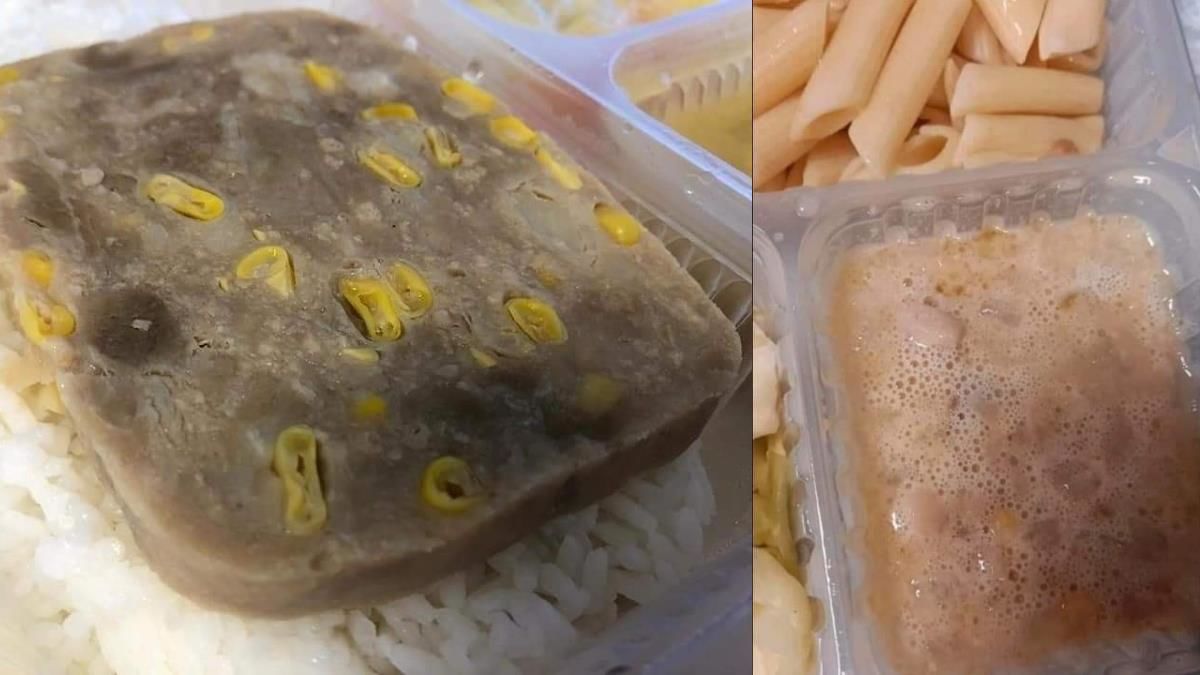 The food in a quarantine camp in Hong Kong looked and tasted horrible, according to people interned there.

On Tuesday, Carrie Lam apologized to those who were recently quarantined at Penny's Bay and said the conditions they were kept in were ''not the best,'' particularly with the alleged food poisoning.

She added that the difficult situation was caused because a ''large number of people had to be arranged to be quarantined within a very short period.''

Lam said Hong Kong could probably achieve zero infections for two weeks if people would stay vigilant and adhere to social distancing rules. She urged the public to get vaccinated as early as possible.

On Tuesday, the Centre for Health Protection recorded only one imported case, which involved a domestic worker from Indonesia. Hong Kong has not reported a local case for four straight days. 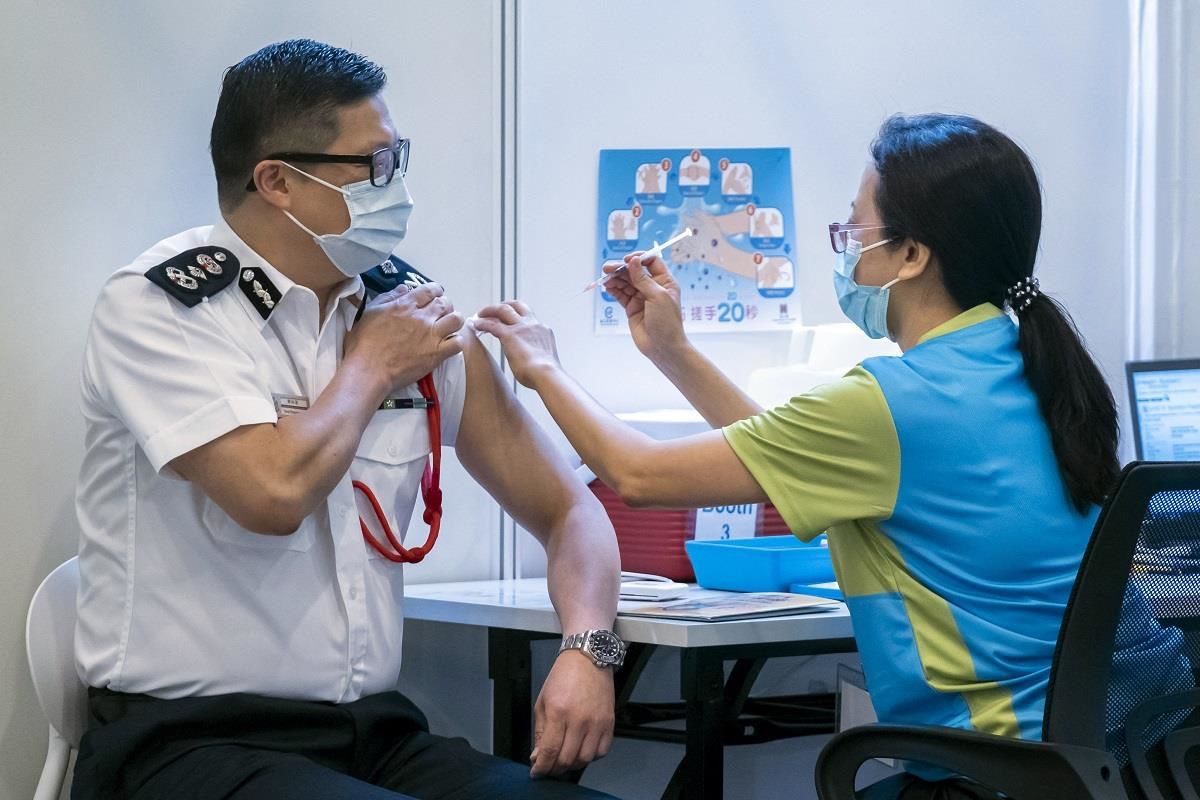 Chris Tang, commissioner of the Hong Kong Police Force, receives a dose of China's Sinovac vaccine at a community vaccination centre in Hong Kong on February 23, 2021.
In late April, about 30,000 to 40,000 people received Covid-19 vaccines every day after the government launched a vaccine bubble program that encouraged the owners of restaurants and entertainment venues to urge their staff to get inoculated.

However, the effect of the vaccine bubble program seemed to be diminishing over the past week. The number of new vaccination bookings decreased gradually from 37,600 per day on May 3 to 8,900 on May 9.

Of the 718 unvaccinated adults interviewed by the Patients and Healthcare Professionals Rights Association in April, more than three-quarters said they were worried they might not be physically fit enough to get vaccinated, even though they did not have any chronic conditions.

Jeffrey Pong, a convenor for the Association, said many people ''worried too much'' about the possible side effects of vaccinations. He said officials should step up education programs and inform the public as quickly as possible of the findings of any investigations into deaths after vaccinations.

Benjamin Cowling, an epidemiologist at the University of Hong Kong, told RTHK that the government should think about launching vaccine passports to incentivize vaccine uptake.

He said quarantine policies could be further relaxed for people who have been vaccinated. He also suggested the government consider reducing close-contact and arrival quarantine requirements for children of fully vaccinated people, to boost the inoculation rate.

Michael Tien Puk-sun, a Roundtable lawmaker, said if Hong Kong launched a vaccine passport scheme, participants should undergo a serum test to make sure they have enough antibodies in their bodies.

Leung Chi-chiu, an expert in infectious diseases, said if Hong Kong and the mainland were going to ''reopen'' the border, it would be better to only let the vaccinated travelers be exempted from quarantine in the beginning. Leung said any one patient with the mutated virus could trigger a new wave of the epidemic.