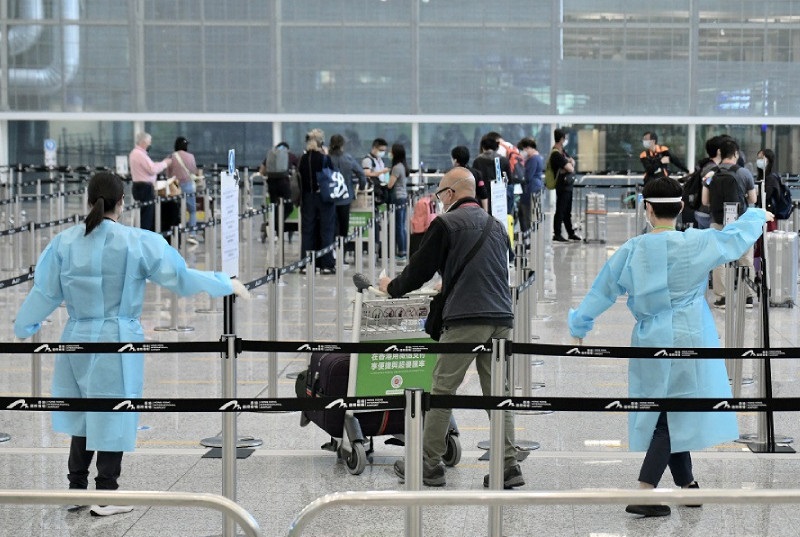 Health authorities on Friday said an imported case reported earlier involved the sub-lineage AY.4.2 of the Delta strain, known as the Delta+, the first time the city saw this sub-lineage.
The city also recorded one imported case from the UK, pushing the city's Covid tally to 12,361.

The patient is a 46-year-old woman who arrived in Hong Kong on Monday on flight BA027. She had received two doses of BioNTech vaccine on March 19 and April 24 here. She underwent quarantine at Nina Hotel Island South in Wong Chuk Hang and remains asymptomatic.

She was also found carrying the L452R mutant strain.

As for the sub-lineage AY.4.2 of the Delta strain, health authorities found it in a 62-year-old man who arrived in Hong Kong from the UK on Monday on flight BA027 as well, whose case was reported on Wednesday.

The Public Health Laboratory Services Branch from the Centre for Health Protection conducted genetic sequencing analysis with the man's sample and confirmed the virus strain matched the Delta+ strain.

The center's epidemiological investigation of the case is ongoing. Under the current arrangement, the center follows up on all imported cases involving mutant strains by conducting genetic sequencing to identify the lineage of the variant strains, including sub-lineage AY.4.2 or Delta+.

AY.4.2 is a newly designated sub-lineage of the Delta strain. According to the World Health Organization, an increase in AY.4.2 viruses has been observed globally since July 2021 and over 26,000 AY.4.2 sequences from 42 countries had been uploaded to the online genome database GISAID by the end of October 2021.

The majority, or 93 percent, of these sequences were reported from the United Kingdom, where a gradual increase in the proportion of Delta+ has been observed.

It was reported that Delta+ might be more transmissible than other Delta strains, especially among household members. So far, preliminary analysis in the United Kingdom does not find significant reduction in vaccine effectiveness for Delta+ compared to other Delta strains.
#BioNTech  #vaccine  #Covid
Add Comment