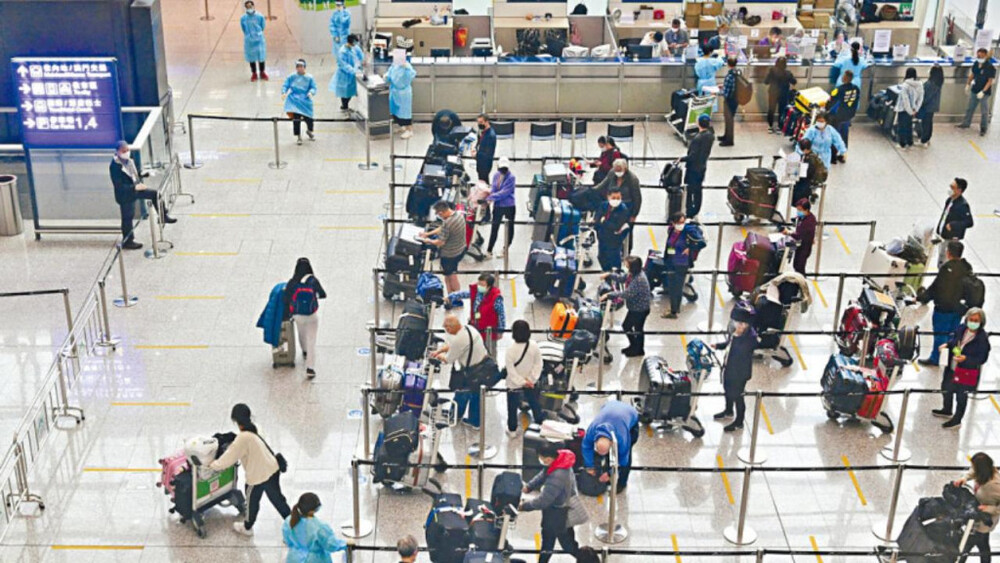 HK quarantine reduction met with calls to go even further

Hong Kong took a much anticipated step to reduce mandatory hotel quarantine for international travelers as the city seeks to restore its position as a financial hub and revive its economy.
While the reduction was welcomed by business groups and analysts, it was seen as insufficient to change the city’s fortunes. With other global financial centers having done away with Covid restrictions, Hong Kong’s continuing efforts to limit the spread of the virus are sinking the economy and spurring an exodus of residents.

Travelers will need to quarantine for three nights, down from seven, effective Friday, the city’s leader John Lee announced on Monday. Arrivals will need to test daily for the following four days and will not be allowed into “high-risk” places such as restaurants, although they can go to the office and use public transport.

The reduction is unlikely to change the poor outlook for Hong Kong, said Alicia Garcia Herrero, chief economist for Asia Pacific at Natixis SA. The city’s economy is projected to shrink this year for the third time in four years.

“It’s just a few less days, but you need to go through the same hell and people are put off by that hell,” said Garcia Herrero.

The need to test negative before arrival, a shortage of hotel rooms and the risk of being sent to a spartan isolation center are among risks facing travelers to Hong Kong.

As other cities struggle with overloaded airports, monthly visitor arrivals to the former British colony are less than 1% of their 2019 peak.

Cathay Pacific Airways Ltd., Hong Kong’s biggest carrier, was among those urging the government to get rid of curbs.

“We are asking the government to urgently provide a clear roadmap showing the complete removal of all Covid-related restrictions for aircrew and passengers as soon as is feasible to protect Hong Kong’s international aviation hub status,” the airline said in a statement.

Lee made no mention of plans to remove curbs in Monday’s press conference. He is seeking to reopen the border with mainland China, where just a handful of cases can put a city into lockdown. Hong Kong recorded 4,040 infections on Monday.

It might take until late 2025 for Hong Kong’s air traffic to recover to pre-pandemic levels, given that quarantine restrictions in the city and China are likely to remain the most stringent globally, according to S&P Global Ratings.

“It is unlikely that Hong Kong will lift all health measures and travel restrictions by the end of 2022,” S&P Global said.

Yet few see Hong Kong thriving without a further easing of rules. Several of Wall Street’s biggest banks have made quarantine-free travel a precondition for senior executives to attend a November conference designed to trumpet the financial hub’s revival.

“A full lifting” of quarantine controls “will be critical for Hong Kong’s economic and business outlook,” said David Graham, executive director of the British Chamber of Commerce in Hong Kong.

Hotels may still struggle to free up rooms, according to Winnie Chan, association manager at the Federation of Hong Kong Hotel Owners. It can take up to nine days to get a room deep cleaned once a positive infection is found due to a shortage of government contractors, Chan said. There were 233 imported cases on Monday.

Still, the government’s approach to Covid has come a long way since March, when two-week hotel quarantine was in force, flights from countries including the U.S. and the U.K. were banned and restaurants were forced to stop dine-in at 6 p.m. Now, schools and bars remain open despite thousands of new cases a day. That drift away from China’s Covid Zero policy and a focus on reviving the economy mean more easing is possible.

“The easing of quarantine measures is a positive step in the right direction, providing some reassurance to the business community that the city will continue to look at reopening to the world,” said Lloyd Chan, senior economist from Oxford Economics. “Hong Kong may continue to fine-tune its Covid Zero strategy, including further relaxing its quarantine policy later this year.”
#Covid
Add Comment