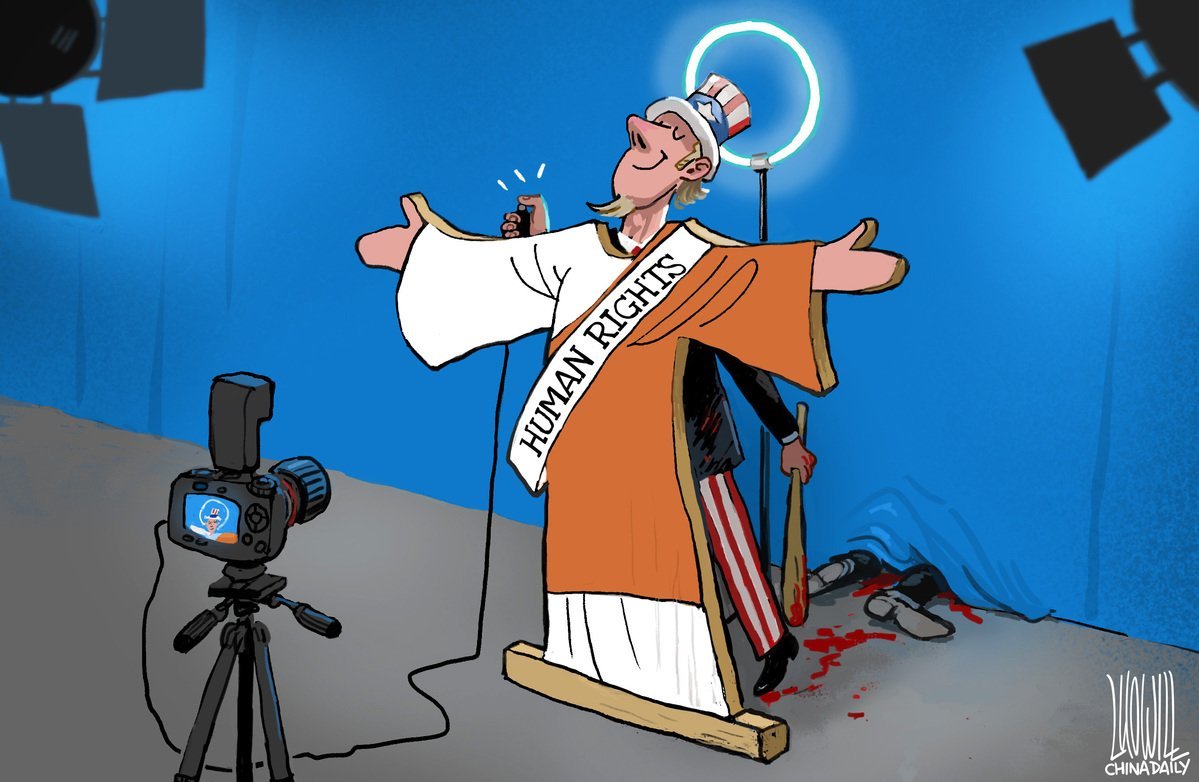 By Jia Wenshan
The protests in Hong Kong, largely led by a group of violence-prone students and people initially opposed to the extradition amendment bill－which has been withdrawn－have been going on for more than five months. The protesters have attacked Hong Kong police and ordinary residents alike, damaged public property, in fact, held the entire city to ransom.

On Tuesday, the US Senate unanimously passed the so-called Hong Kong Human Rights and Democracy Act of 2019, which signifies direct US interference in Hong Kong's affairs and thus China's internal affairs.

Media turn a blind eye to facts in the SAR

The Western media, particularly mainstream media outlets in the US, have played a major role in polarizing US society. This time, they have turned their attention on Hong Kong. Mainstream Western media outlets have published tons of news reports and editorials on the Hong Kong protests, but ignored the protests by the Chinese media.

While the Chinese media tend to view the Hong Kong protests primarily from an economic point of view in that economic disparity in Hong Kong is the main cause of the protests, with the extradition amendment bill acting as a trigger, the mainstream Western media have focused on the US version of human rights and democracy vis-à-vis Hong Kong.

As their reports on Hong Kong show, most of the Western media outlets have not bothered to interview Hong Kong police officers who have been combating the rioting mobs at the risk of their lives. Nor have they bothered to talk with Chinese mainland residents living in Hong Kong or ordinary Hong Kong residents who want peace and order to be restored.

For example, when People's Liberation Army soldiers stationed in Hong Kong helped local people clear road barricades and the debris left behind by the marauding mobs, many Western media outlets interpreted their presence on the streets as a sign of the central government preparing to crack down on the protesters.

Such reports distort reality and sow the seed of discord in society. The Western media, it seems, want to pit Hong Kong residents against their mainland compatriots, and "democracy" against "authoritarianism". The Western media outlets want to turn Hong Kong into a new Cold War theater and geopolitical combat zone. As such, the rioters, unwittingly or otherwise, have become agents of Western forces.

Some of these youths have gone as far as denying their Chinese identity and demanding Hong Kong "independence". For example, an editorial in The Washington Post, headlined "China is wrecking Hong Kong's ideals. And it only has itself to blame", on Oct 5, blamed the Hong Kong administration and the central government for the violence unleashed by the demonstrators.

Lionizing the leaders of the rioters, the editorial urged the US Congress to pass legislation to institutionalize and legitimize Washington's interference in Hong Kong's affairs. The editorial said: "Congress ought to send a stronger message by approving legislation requiring a review of whether Hong Kong is sufficiently autonomous from China to deserve its current special economic and legal treatment from the United States."

Prejudiced outlook of the West on show

The Post even lauded Joshua Wong, leader and co-founder of "Demosisto" for bidding to run for a local office in Hong Kong in the hope that he would rise to the top in the political arena and become a political puppet of Washington in the future. On the other hand, these media outlets have never lionized a single American participant in the Occupy Wall Street movement in 2011 for fighting against the system responsible for the US' social and economic woes.

While the US administration has invited some of the protest leaders including Wong to give testimony at Congress hearings on Hong Kong, American politicians such as Ted Cruz have visited Hong Kong to show solidarity with Hong Kong protesters. Unashamedly, Cruz branded the Hong Kong protests as a "pro-democracy movement", and Nial Ferguson, a Stanford professor of history, portrayed the riots as an attempt to tear down "the new Berlin Wall", the so-called great firewall, referring to the "political and digital divide" between Hong Kong and the mainland.

Although US President Donald Trump has said he will not support the Hong Kong protesters, it remains to be seen if he has secretly consented to US interference in the SAR's and thus China's internal affairs and lent support to the radical protesters as part of his multi-pronged strategy to blunt China's competitive edge in the global economy and check its peaceful rise.

The mainstream US media are seemingly opposed to the three branches of the US government, but they are openly corroborating the US administration's stance on Hong Kong. The US is treating the violent demonstrations in Hong Kong as a gigantic show in which the American media, politicians, and some pro-US Hong Kong residents are playing different but destructive roles.

But their dream of achieving the unachievable will never be realized, simply because they cannot change the fact that Hong Kong is an integral part of China.

As for freedom and democracy in Hong Kong, and by extension the mainland, they are not subject to the description and dictates of the US Congress or the US media. It is up to the SAR and central governments and the Chinese people to discuss the nature of freedom and democracy in the country. The Chinese people (including Hong Kong residents) are smart enough, resourceful enough, powerful enough, and dignified enough to decide their own future.

Americans would do well to mind their own business, because US politics and society seem to be in trouble. If American politicians and media pretend not to see the state of affairs in their own country or hope to salvage it by promoting the US-model of "democracy" in foreign lands such as China, they will only end up shooting themselves in the foot.

The mainstream US media's purpose for mobilizing violent Hong Kong students and condoning the mayhem they have committed through their reports is to weaken the Chinese political system, including the "one country, two systems".

Since all the efforts and resources expended by the US media and politicians to undermine China have proved futile, they should spend their energy and resources to solve their own domestic problems, such as rampant homelessness, pervasive gun violence, racism, resurgent white supremacism and neo-Nazism, worsening economic disparities and political polarization.

The protests in Hong Kong are an internal matter of China, not subject to outside interference. Hong Kong is an inalienable part of China, and no one except the Chinese people can decide the fate of Hong Kong.

Why doesn't US reform its development model?

The assumption that the US model is not working because China is not buying into it is simply absurd. Besides, it proves the theory of attribution correct. In an individualistic society such as the US, one tends to attribute achievements to oneself and blame others for one's failures. Which explains the rationale behind the US administration's rhetoric and strategy against China.

For the good of the US, China and the rest of world, it's time the US media and political pundits paused, reflected, and re-strategized their engagement with the American public, as well as with the people on the Chinese mainland, in the SAR and the rest of the world. 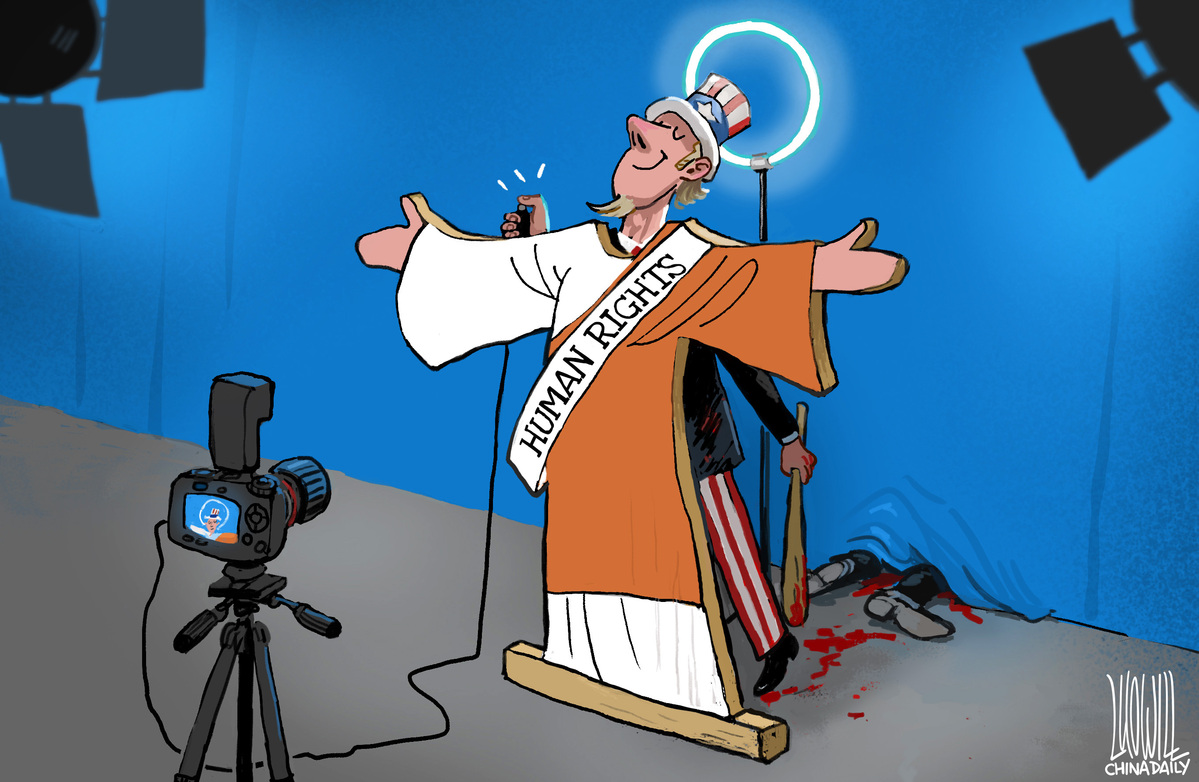 * The author is a professor at the School of Communication, Chapman University, and adjunct professor at Shandong University. The views do not necessarily represent those of China Daily or the universities.