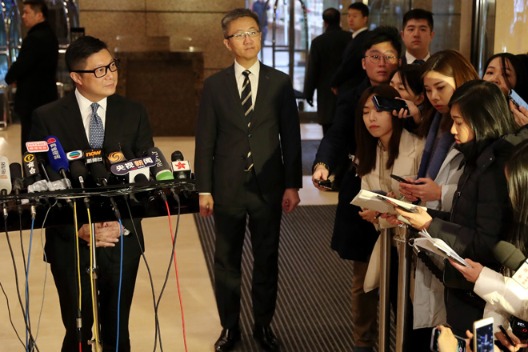 While meeting the media on Saturday in Beijing, the second day of his trip to the capital, Tang said the Hong Kong police will strengthen actions against violence－such as the use of gasoline bombs, attacking passersby or arson. But police will be flexible in how they deal with peaceful protesters in the streets and other minor offense by young people.

He said many fake news reports and rumors appeared discrediting Hong Kong police and dragging down their popularity. Hong Kong police will engage in a self review to see how to improve transparency and remain professional.

"If someone wants to use the Commission of Inquiry as a tool to restrain the police's ability to investigate and enforce the law, it is unfair, and I don't agree with that," he said.

Tang arrived in Beijing on Friday and visited such central authorities as the Ministry of Public Security, the Commission for Political and Legal Affairs of the Communist Party of China Central Committee, and the Hong Kong and Macao Affairs Office of the State Council.

Leading officials of these departments took a positive view of the efforts made by the Hong Kong police to curb crime and safeguard the rule of law in the past few months.

Guo Shengkun, a member of the Political Bureau of the CPC Central Committee and head of the committee's Commission for Political and Legal Affairs, said on Saturday that ending the violence and chaos and restoring order remains the most urgent task for Hong Kong at the moment, according to Xinhua.

Tang said he introduced the police force's new management team, reported on the recent developments and discussed the police cooperation between the mainland and Hong Kong when meeting with senior officials of these central authorities.

On Saturday morning, he and his delegation watched the flag-raising ceremony in Tian'anmen Square.

Tang said that he was excited and felt the strength of the country, which has further strengthened the confidence and determination to ensure strict law enforcement in Hong Kong.

Hong Kong police on Sunday morning seized a semi-automatic pistol, five magazines loaded with 105 rounds of ammunition and various other offensive weapons that were believed to be part of an arsenal radical protesters planned to use in an anti-government rally later that day.

Steve Li Kwai-wah, senior superintendent of the Organized Crime and Triad Bureau, said at a news briefing that it was the first gun police had seized since the massive anti-government protests stemming from the extradition bill incident erupted in June.

Early on Sunday, police swooped down on 11 locations across the city where they also seized a number of daggers, sabers, batons, pepper spray and firecrackers. Eight men and three women, aged between 20 and 63, were arrested during the raids.

Police said some of those arrested were part of a "radical group" connected with a gasoline bomb attack at Mong Kok police station on Oct 20.

Li said police believe radicals intended to use these weapons on frontline officers and passers-by to create chaos at a rally and then turn the blame on police.

An investigation on the source of these weapons is underway, Li said, adding that the 9 mm Glock pistol found in North Point was in good condition.

The arrestees, some of them students, were taken in on suspicion of possession of arms or ammunition without license, possession of offensive weapons and possession of dangerous items, and unlawful assembly, police said.