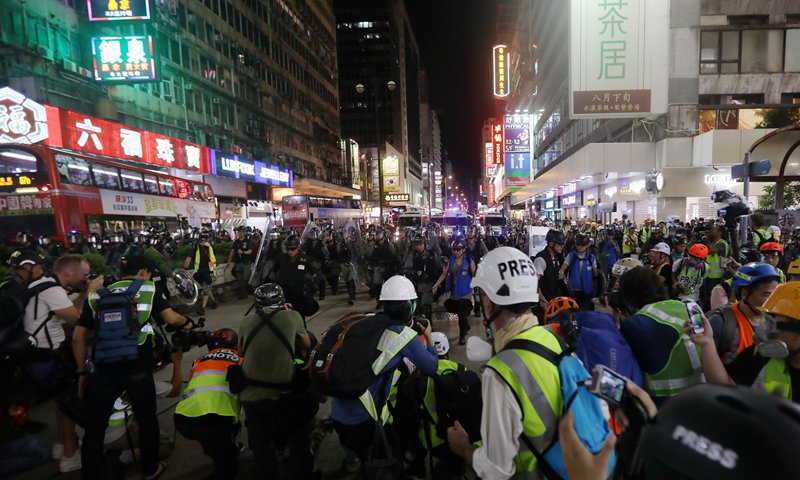 When a riot broke out in Yau Tsim Mong district on September 6, a cross-dressing man who wore a fluorescent yellow vest which reads "press," fell to the ground and began to tremble, pretending to have been hit by a police pepper bomb. Imaginary dramas like this have been staged repeatedly in Hong Kong SAR since last year.

At a time when many "reporters" have habitually adapted the "plot" of the riots, the announcement that Hong Kong police will revise the definition of "media representative" under the Police General Orders has caused uproar in the monetary hub.

Although government and the police have clearly stated that adopting the Government News & Media Information System (GNMIS) to define media representatives will help it assist and safeguard the legitimate rights of recognized media outlets and journalists, over 70 online and student media have issued various versions of joint statements, which slanted the police's decision is "imprudent" and "backwards."

However, many of these "news outlets" have been widely accused of lacking basic professional ethics and journalistic integrity to support the violent protests amid chaos and also in the daily reporting.

Experts and Hong Kong residents reached by the Global Times said the amendment is a very timely and effective measure that contributes to the media ecology in Hong Kong SAR.

"At the illegal gathering, a large number of 'reporters' provided cover for the mobs, meanwhile creating trouble and insulting the police for using violence," Bill Choi, a senior Hong Kong media colleague told the Global Times, saying that if the so called "reporters" cannot find fault with the police, "they invent it themselves."

On July 21, black-clad protesters gathered at a department store in Yuen Long. The inmediahk.net, a US Nevada-based news website, which promoted no review of press releases, asserted dozens of policemen rounded up journalists and repeatedly checked their press cards.

However, in a video uploaded by hkpusu PressCom, a campus media of Hong Kong Polytechnic University (HKPU) that also supports protesters, a large number of "yellow vests" ran after the police while pointing lenses of cell phones and cameras at them.

The Global Times found that the Facebook page of hkpusu PressCom is flooded with deceitful and misleading negative information about the Hong Kong police.

"I used to think university media will share colorful campus life, but now this platform is full of prejudice and rage. They seem to believe that false things can be true as long as they shout repeatedly," said a HKPU student surname Pun.

Choi said that the overall security environment in Hong Kong has improved since the national security law was passed, but many protesters have shifted their activity online, spreading rumors under the pretense of representing news outlets.

Voice of America released a video showing a Citizen's press conference's spokesperson with a face mask who expressed Hong Kong's future lies squarely with the United States, and the hope the US would counterbalance the Communist Party of China.

On July 20, the Police Public Relations Branch wrote to Hong Kong Journalists Association (HKJA) to lodge a formal complaint over six incidents of false reporting or misconduct between May and July, including an incident about the Student Depth Media sending two "journalists" aged 12 and 16 respectively to the scene of the riot.

However, according to local media, the HKJA wrote back saying the complaints of police were outside the scope of public complaints, and most of the six incidents were journalists' individual behavior not covered by the complaint mechanism of false or unethical reporting.

The HKJA has been criticized for freely handing out press cards and harboring radical protesters disguised as "journalists."

Under the police's new rules, starting from last Wednesday, certificates issued by the HKJA were no longer acceptable credentials.

Although the HKJA defended that all the press cards have been issued in accordance with the constitution of the association, according to local media Wen Wei Po, students can apply for HKJA membership with just a copy of their student ID card as certificate and one current member as a reference. Many of the "student reporters" who mobilized violence during the riots thus had a legitimate reason to act recklessly.

The Global Times noticed that staff from media including the Apple Daily, Citizen News, and the Stand News account for the vast majority in the HKJA 2020-2021 executive committee members. These news outlets prominently supported opposition organizations amid the unrest.

Every year, the HKJA publishes an annual report demonizing relations between Hong Kong and the Chinese mainland.

Choi said that the HKJA is a civil society press union, and there is no open election process within the HKJA for the election of core members and the chairman of the executive committee.

"The definition of the identity of journalists in Hong Kong SAR is very vague. Once it is exploited by some internal and external political forces, it will bring a huge regulatory crisis to Hong Kong," Li Xiaobin, a Hong Kong studies expert at Nankai University in Tianjin told the Global Times.

The Foreign Correspondents' Club (FCC) in Hong Kong has not missed this opportunity to smear the country, joining the HKJA team in accusing the Hong Kong police for eroding press freedom.

The FCC Hong Kong often showed its true colors of pro-opposition camp stance. For instance, it once invited separatist party leader Andy Chan Ho-tin to give a speech advocating Hong Kong independence in 2018.

Victor Chan Chi-ho, vice chairman of the Hong Kong Association of Young Commentators, pointed out that many people have exaggerated the negative effects of the new regulation.

"Journalists from formal media outlets are not affected by the new rule, but can even get the convenience from the police during interviews. The online media journalists and student reporters can also legally carry out their reporting activities in public places," Chan told the Global Times.

Chan said journalists should possess professional skills and uphold the principle of truthfulness and impartiality. But some people who did not receive professional training or were not employed by a news organization have obstructed the work of police and those real journalists.

In the past, press freedom has kept Hong Kong's media alive, but today many people in Hong Kong superficially regard this freedom as an unfettered "gold medal" that ignores social and legal responsibilities to pose a threat to Hong Kong's social stability, Li said. "The flip side of freedom is order, and laws and social norms remain the core of what makes Hong Kong a strong economic entity."

Li stressed that any freedom of speech has bottom lines and boundaries, and if the political consensus to maintain national unity cannot become the background color of the news media, such "freedom of the press" could be abused.

"Standardizing the management and service of the journalism industry in Hong Kong from a pragmatic perspective will help to rebuild the professional image and maintain the credibility of Hong Kong journalists," Chan said.