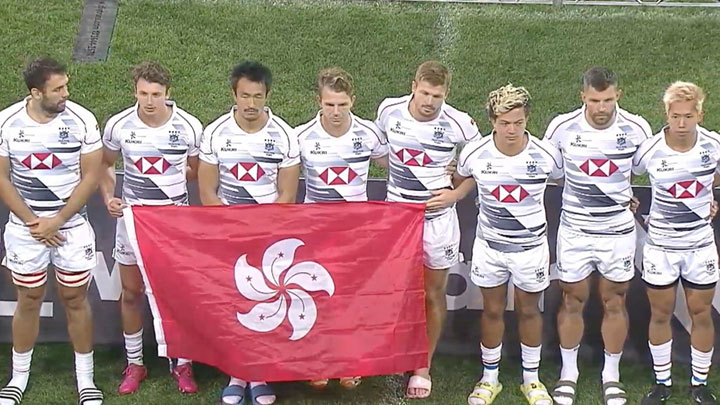 To ensure proper respect for National Anthem and Regional Flag, Hong Kong Sports Federation and Olympic Committee (SF&OC) issued guidelines to provide clear instructions for all athletes, teams, sports associations management and personnel.
After several blunders involving the national anthem playing during the rugby tournaments, SF&OC issued "Guidelines on Handling the Playing of the National Anthem and Raising of the Regional Flag for Hong Kong Athletes and Teams Engaging in International Sports Events" to all national sports associations (NSA) on Tuesday.

The Guidelines stipulate that in case an error is found in the playing of the National Anthem or raising of Regional Flag during international sports events they participated in, athletes and teams should use their hands to display the sign of "T" to express objection and call for immediate correction.

SF&OC will also provide toolkits containing the correct National Anthem and Regional Flags for NSAs. The team leader assigned by the relevant NSA is responsible for bringing along the toolkit and passing it to the event organiser.

All NSAs should ensure the use of the National Anthem and Regional Flag are in full compliance with concerning ordinances and guidelines, SF&OC said.

SF&OC added that it formulated the Guidelines after meeting with the Culture, Sports and Tourism Bureau, and the guidelines will take effect immediately.

The Hong Kong Rugby Union (HKRU) welcomed the Guidelines issued by SF&OC and added that the Union would follow and incorporate the guidelines as part of a thorough and comprehensive internal review of its team protocols and procedures.

The Union again expressed sincere regrets for the offence caused by errors made by Asia Rugby and World Rugby at recent international competitions. And it looks forward to earning back the trust damaged by the errors made by the game’s regional and global governing bodies.

Meanwhile, the President of Asia Rugby, Qais Abdulla Al Dhalai, paid a special visit to Hong Kong from Dubai to explain the incident about a protest song played in place of the Chinese national anthem during Asia Rugby Seven in South Korea on November 13.

Al Dhalai told Chief Secretary for Administration Eric Chan Kwok-ki in a meeting on Tuesday that the incident was due to a human error and entirely without any political or malicious intent. He apologized to the government and people of the HKSAR and undertook to ensure no similar mistake will happen again.

Chan reiterated that the SAR government strongly deplores and opposes the incident. He urged Asia Rugby to steadfastly implement all necessary remedial measures and reminded that there is absolutely no room for any mistake in all future tournaments to be participated by the Hong Kong Rugby Team, including the Asia Rugby Sevens Series' third leg to be held in Dubai in late November.
Add Comment