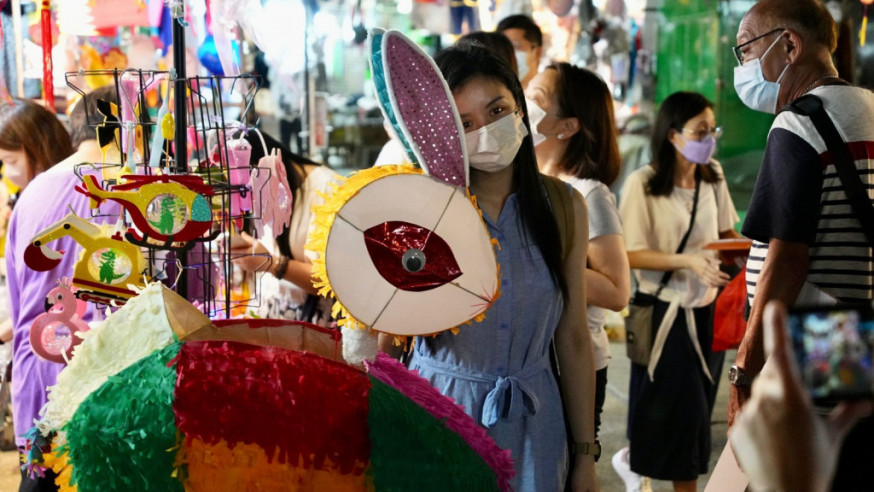 Health authorities called on citizens to take Covid tests frequently if they are going to private gatherings this Mid-Autumn Festival, while the city counted 10,076 new infections on Friday.
Among the new infections, 9,922 were transmitted locally, including 2,629 confirmed via PCR tests and 7,293 via verified positive RAT results. Chuang Chuk-kwan from the Centre for Health Protection also logged 154 imported cases – 63 identified at the airport, 53 in quarantine hotels and facilities, and 38 found in local communities.

She continued that citizens should avoid attending gatherings if they develop any symptoms. Even if they test negative via a RAT, they should take another PCR test to confirm again, she noted.

Chuang also suggested citizens taking a RAT themselves before heading to gatherings and explained it is very likely to be exposed to the coronavirus when going maskless at parties.

On another note, Chuang again clarified that children can present their vaccination certificate in paper when entering Vaccine Pass premises, or parents can take a photo of the certificate on their phones.

She added that authorities have launched criminal investigations against 40 confirmed patients who breached the isolation requirement, and three have already received a court summons. She reminded citizens to abide by the law.

Hospital Authority's chief manager for integrated clinical services Larry Lee La-yip reported 11 deaths, including seven men and four women, aged 50 to 100. Seven of the deceased patients had yet to receive the booster jab.

Lee noted that the deaths for six patients were not associated with Covid, while the deaths of the other five were.

The death tally of the fifth wave now stands at 9,567.

Lee also said the HA is planning to increase the number of beds at the AsiaWorld-Expo treatment facility by 280 after Mid-Autumn Festival.

The CHP was informed of 1,171 positive cases from 707 schools, including 984 students and 187 teachers and staffers.

Public facilities are now housing 2,759 Covid patients. Among them, 54 are in critical condition, 59 are in serious condition and 15 are in hospital intensive care units. As of Friday, 336 patients have recovered from Covid and 284 have been discharged.
#Coronavirus  #vaccine  #Covid
Add Comment