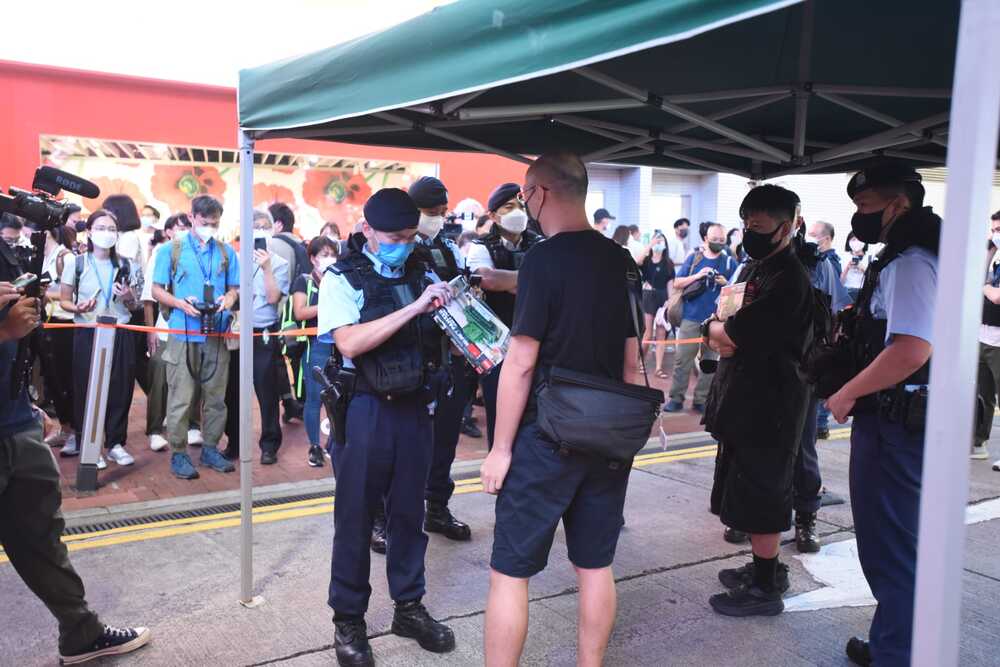 Hong Kong authorities on Saturday detained several people as they pounced on any attempt at public commemoration of the 33rd anniversary of the Tiananmen crackdown, while around the world tributes were paid to the victims of the bloody event.
Five men and one woman, aged 19-80, were arrested in the course of the day, Hong Kong police said.

Three of them were detained for obstructing officers in the execution of their duties, one for inciting others to join an unauthorised assembly, and the remaining person was apprehended for possession of offensive weapons, according to the police.

Activist Yu Wai-pan from the League of Social Democrats (LSD) party was also briefly detained but later released without charge, according to his party.

"For 33 years it has always been peaceful, but today it's like (police) are facing a big enemy," Chan Po-ying, head of the LSD, said.

As night fell, candles appeared in the windows of several foreign countries' missions to Hong Kong -- in defiance of a warning not to do so -- and on various street corners around the city.

Discussion of the events of 1989, when China set troops and tanks on peaceful protestors, is all but forbidden on the mainland.

Semi-autonomous Hong Kong had been the one place in China where large-scale remembrance was still tolerated -- until two years ago when Beijing imposed a national security law to snuff out dissent after widespread pro-democracy protests in 2019.

Authorities had warned the public that "participating in an unauthorised assembly" Saturday risked a maximum penalty of five years' imprisonment.

They also closed large parts of Victoria Park, once the site of packed annual candlelight vigils that were attended by tens of thousands on the anniversary.

The park and nearby Causeway Bay shopping district -- one of the city's busiest neighbourhoods -- were heavily policed all day Saturday.

People were stopped and searched for carrying flowers, wearing black and, in one case, carrying a toy tank box.

Security was heightened in the Chinese capital Beijing on Saturday, with officer numbers bulked up, and ID checks and facial recognition devices set up on roads leading to Tiananmen Square.

China has gone to exhaustive lengths to erase the crackdown from collective memory, omitting it from history textbooks and scrubbing references to it from the Chinese internet and social media platforms.

A similar approach is now beginning to be applied to Hong Kong, as authorities remould the city in the mainland's image.

Since last September, the Victoria Park vigil's organisers have been arrested and charged with subversion, their June 4 museum has been closed, statues have been removed and memorial church services cancelled.

Commemoration events in Macau were also cancelled this year.

On Saturday, multiple Western consulates general in Hong Kong posted Tiananmen tributes on social media, despite local media reports that they had been warned by the city's Chinese foreign ministry office to refrain from doing so.

The European Union's office confirmed to AFP that they had received a call.

At dusk, both the US Consulate General and the EU office's windows were illuminated by the flickering light of candles.

"The European Union always stands in solidarity with human rights defenders across the globe," the latter wrote on Twitter, posting a picture of dozens of candles on a windowsill.

Earlier, US Secretary of State Antony Blinken released a statement pledging to continue to "honour and remember those who stood up for human rights and fundamental freedoms".

"While many are no longer able to speak up themselves, we and many around the world continue to stand up on their behalf," he said, specifically mentioning the situation in Hong Kong.

A spokesperson for the city's Chinese foreign ministry office said it "firmly rejected and strongly condemned" Blinken and other US officials' statements.

"Their political show interfered in China's internal affairs under the guise of human rights and freedom, and smeared Hong Kong's human rights and rule of law, in an attempt to incite hostility and confrontation and tarnish China's image," read a statement.