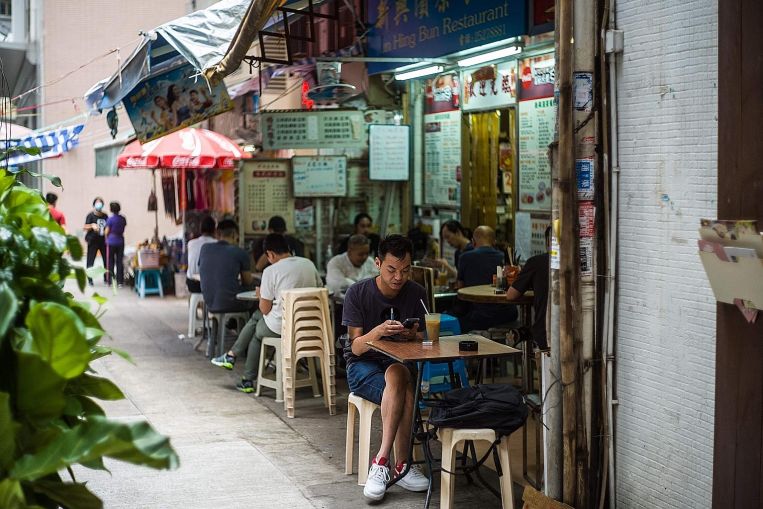 Hong Kong has moved to ease dining restrictions in the latest effort to encourage people to get vaccinated but many remain sceptical if it will succeed.

Mr Kwok Wang Hing, chairman of the Eating Establishment Employees General Union, dismissed the move as not much help.

"Most of the eateries have staff who are not vaccinated, don't use the government contact tracing app LeaveHomeSafe, nor have customers who are inoculated. That's why most of the food and beverage (F&B) entities only keep the cap of either four or six patrons per table," he told The Sunday Times.

In Hong Kong, there are four different sets of Covid-19 rules for eateries to operate.

An estimated 95 per cent of restaurants fall under the A and B modes of operation, which are more restrictive. Vaccination of staff or using LeaveHomeSafe is not required.

The restaurants run at half-capacity and dine-in services end at either 6pm or 10pm.

Last Monday, Chief Executive Carrie Lam announced that rules would be loosened on Thursday for two weeks for some businesses.

Restaurants belonging to category D can now run at full capacity, sit up to 12 patrons and open till 2am. This is provided all their employees are fully vaccinated and at least two-thirds of their customers have had at least one jab.

Those belonging to category C, of which there are about a thousand, can now operate at 75 per cent capacity, 25 per cent more than previously.

But other limits such as the cap of six patrons per table and the ending of dine-in services at midnight remain. Other requirements that all staff must have had their first dose of the vaccine and that customers use the LeaveHomeSafe app stay.

The cap for banquets has been raised to 180 people if at least two-thirds of them have received the first dose, and live performances will be allowed provided the performers have had their first shot.

Bars and pubs, where staff are fully vaccinated, can open till 3.59am daily, with up to eight people per table if their customers have had at least the first shot of a vaccine.

Mr Jonathan Zeman, chief executive officer and director of Lan Kwai Fong Group, said the easing will have a positive effect on revenue, given that they can now open longer and accommodate more customers.

"At Lan Kwai Fong Group, we arrange a consultation day conducted by a doctor," he said.

"Additionally, we offer incentives to encourage vaccination among our staff - all staff will be entitled to three days' vaccine leave upon taking each vaccination.

"If you have completed both inoculations, you are entitled to six days of vaccine leave."

But other popular F&B players in either category B or C, which declined to be named when approached, said they expected the status quo for their businesses.

Mr Simon Wong Kit Lung, chairman of the Institution of Dining Art, told local media that the relaxation of the rules was aimed at sending a clear signal that vaccination was a must, adding that "the relaxation on banquets may be the most meaningful".

When making the announcement on Monday, Mrs Lam said that she hoped the new rules would encourage more people to be vaccinated.

Only about 26 per cent of Hong Kong's 7.5 million population have had one dose of the Covid-19 vaccine. Just 17 per cent have had both doses since the islandwide vaccination drive kicked off in late February.

The numbers are lagging behind Singapore, some European countries and Israel.

Observers like Mr Kwok noted that there has been too much negative news, hence the vaccine hesitancy.

"It's also because Hong Kong's situation has not been severe so there's no urgency," he said.

"So, the more the government urges people to take the jabs, the more people will distrust the advice."

The Department of Health said that as at June 20, it had received over 3,700 reports of adverse events or 0.12 per cent of the total vaccine doses administered.

The new rules, pegged to higher vaccination levels, kicked in on Thursday and will remain in effect until July 7. In Hong Kong, there are four types of operations under Covid-19 rules for the food and beverage sector.

No mandatory specific measures like vaccination for staff or customers, testing or use of the LeaveHomeSafe app. Cap of two per table, dine-in services to end at 6pm, and establishments can operate at half-capacity of the venue.

Staff must get tested every 14 days and customers have to use declaration forms. Cap of four per table, dine-in services to end at 10pm, and outlets can run at half-capacity.

Staff to have first dose of the vaccine and customers must use LeaveHomeSafe. Cap of six per table, dine-in services to end at midnight and outlets can run at 75 per cent capacity, up from 50 per cent previously.

Staff are fully vaccinated, two-thirds of customers must have at least the first dose and use LeaveHomeSafe. Cap of 12 per table, up from the previous eight. Dine-in services to end at 2am and outlets can run at full capacity, up from 75 per cent previously.

If staff are fully inoculated, with patrons having taken their first dose and using LeaveHomeSafe. Can close at 4am and sit up to 12 per room.

If staff are fully inoculated, with customers having taken their first dose and using LeaveHomeSafe. Can sit up to eight per table, close at 4am and run at full capacity.

Religious gatherings, weddings and business meetings can be held at a venue at full capacity so long as two-thirds of participants are vaccinated.

There have been 22 deaths or 0.0007 per cent of total vaccine doses administered, where the victims received their jabs within 14 days before dying. None of the deaths was associated with vaccination.