The Hong Kong pro-democracy figure and media mogul Jimmy Lai received a hero’s welcome as he returned to his newspaper after being arrested on allegations of foreign collusion, while Chinese state media labelled him a “genuine traitor”.

Lai, his sons, senior executives from his Next Digital media company and others including the activist Agnes Chow were detained under Beijing’s national security law on Monday. Hundreds of police officers also raided the offices and newsroom of Apple Daily, the popular tabloid Lai founded, in a move decried as an assault on press freedom.

Most of the 10 arrested were released on bail late on Tuesday night.

Lai’s return to Apple Daily on Wednesday was livestreamed by staff, who lined the building’s stairwell which days earlier had been full of uniformed police officers. They cheered and applauded as he entered and walked through the newsroom to his office, stopping to hug his chief executive officer, Cheung Kim-hung, who was also arrested, and joking that it was lucky he had not been sent to the mainland.

“I’m very touched, we will fight on,” Lai said. “We have the support of the Hong Kong people. We can’t let them down.” It was becoming increasingly difficult to run media in Hong Kong, but they must continue, he said.

Rare in my memory that a newspaper's boss could get such a big round of applause from his staff as he entered a newsroom. But @JimmyLaiApple just received that, and flowers. And CEO Cheung Kim-hung, who was also released on bail, welcomed him with a big hug. pic.twitter.com/ojgQZW8HM6

Beijing imposed new national security laws at the end of June, bypassing Hong Kong’s legislature with the support of the territory’s government, and establishing secret police and a national security council to oversee it.

The law has been described as broadly defined and draconian. Beijing and the Hong Kong government say it is necessary to restore order after the instability of mass pro-democracy protests during much of 2019.

Lai, who also holds UK citizenship, is the most high-profile figure detained under the law. If charged and convicted, he could face sentences of three to 10 years in jail, or up to life for an offence “of a grave nature”.

Legal analysts have noted that those arrested on suspicion of foreign collusion could potentially be transferred to the mainland for trial, where the judiciary is routinely criticised as opaque and where about 99% of all cases result in conviction.

Chinese state media described Lai in 2019 as one of a new “Gang of Four” conspiring against Beijing. He already faces several charges over involvement in last year’s pro-democracy protests, and was one of 25 people charged on Friday for attending a Tiananmen Square massacre vigil in June.

The US government and human rights and journalism bodies around the world condemned his arrest, and finance analysts reportedly said they would buy shares in Next Digital in support. The stock price had risen 300% by late on Monday, and by another 500% on Tuesday.

On Tuesday morning Hongkongers queued from the early hours to buy copies of Apple Daily with the front page “Apple will fight on”. Some bought a number of copies and left them in public places for people to take. 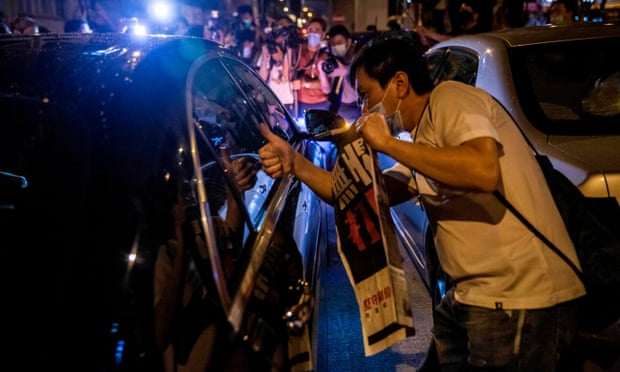 Supporters of Jimmy Lai offer copies of the Apple Daily after his release on bail. Photograph: Isaac Lawrence/AFP/Getty Images

The separate arrests of Lai and 23-year-old Chow have prompted speculation that authorities may be applying the national security law retroactively, given neither appear to have outwardly courted international figures or bodies since 30 June.

Chow told reporters she had been arrested four times, but that this had been the most frightening experience. “The political prosecution this time was ridiculous,” she said, noting that she had said in June that she would no longer speak in the international arena. “It’s very obvious the regime and the government is using the national security law to suppress political dissidents.”

In an editorial, China’s state mouthpiece, the Global Times, said Lai had courted the US during bilateral hostilities and “become a genuine traitor”.

“Lai has gone too far on this path. He has fallen completely into the US orbit,” it said. “His efforts not only aim at pushing Hong Kong society toward the US in terms of values, but also kidnapping Hong Kong interests to place Hong Kong on the US chariot – thus fundamentally turning Hong Kong, China’s window to the outside world, into the US anti-China frontline.”

The freelance journalist Wilson Li was also arrested on Monday. He said he was released after 33 hours in detention. “My bail was set at $20k with a $180k surety, and my travel documents were confiscated,” he said. “They collected all my mobile phones and computers, as well as all my credit cards and bank cards.”