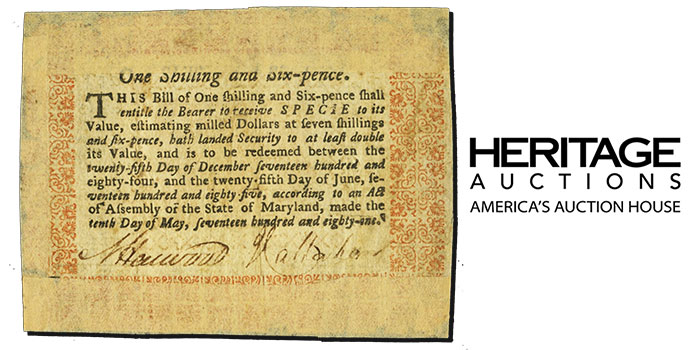 The latest Showcase auction of currency from Heritage Auctions features Part II of The Colonial Valley Collection, and it is open for bidding at Currency.HA.com. As might be expected from the name of the collection, virtually the entire offering consists of Colonial notes. This auction is scheduled to end with a Live session conducted exclusively through Heritage Live beginning at 6 PM CT on June 27.

One interesting note featured in this auction is lot 96208, a 1 shilling, 6 penny note graded Choice 15 Net by PMG. £200,000 in bills known as “red money” were authorized to be issued by Maryland by the Act of May 10, 1781. They were payable in specie between late 1784 and the middle of 1785 out of the proceeds to be received from the confiscation of Tory property. This is a very striking series of notes printed by Frederick Green with red face border cuts and a red Maryland coat of arms on the back. The notes were payable in specie per the obligation at a rate of 7 Shillings 6 Pence per dollar (making this in effect a $1/5 note). The colors and overall style make this popular with collectors. This example, with clear signatures of Nicholas Harwood and John Callahan, has been reinforced with tape on the face, hence the Net grade.

Occasionally, a superior banknote presents itself, bringing hope and relief to the collector world, confirming that even the very rarest notes can still be obtained. Make no mistake, the Hongkong & Shanghai Banking Corporation, Foochow 1 Dollar 1.6.1887 Pick S326, graded Very Fine 20 by PMG, is just such a note. This example is still the only one of its type to be offered in a public, traceable auction. Likewise, it is the only example graded in the PMG Population Report.

While Fuzhou (or Foochow, as it was then called) is now a major global city, this important 19th-century banknote was printed in extremely small batches, as currency needs were only a tiny fraction of what is needed today. Queen Victoria’s portrait is prominently engraved on the back of this note, which is the lone note of the series to feature this design. Likewise, there are no other HSBC issues for China with these design elements. All design elements are on full display, including manuscript signatures and the partially hand-written date. Two small notations, one on each side, are mentioned for accuracy. There are no netting defects or other distractions to the design. A high-quality and well-executed engraving by Bradbury, Wilkinson & Company makes this variety a standout beauty. High rarity ensures that this note is certainly missing from even the best collections.

Heritage’s first offering of this trophy banknote is an opportunity not to be missed.

This note and the rest of the outstanding offerings in the Hong Kong Currency Auction will sell in a live session at 9 PM CT on June 23 (10 AM Hong Kong time on June 24).

Bid on both auctions exclusively at Currency.HA.com.