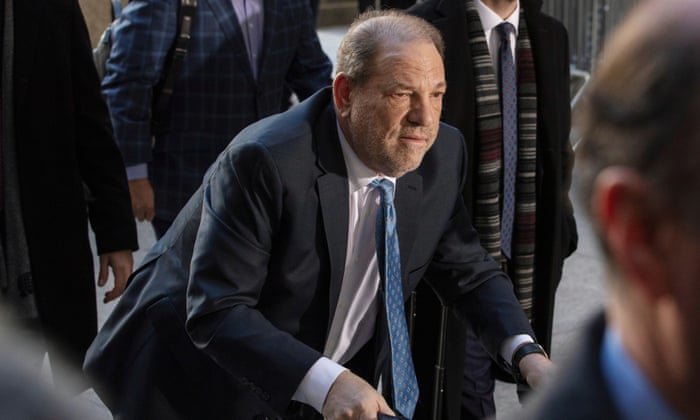 Harvey Weinstein sentenced to 23 years in prison on rape conviction

New York judge imposed 20 years for a first-degree criminal sex act and three years for third-degree rape, to run consecutively
Harvey Weinstein, the titan of Hollywood turned convicted rapist, has been sentenced to 23 years in prison on Wednesday in New York.

The fallen mogul was handed down his punishment by Judge James Burke at the New York supreme court having been convicted of two counts of sexual assault. The judge imposed 20 years for a first-degree criminal sex act for forcing oral sex on a production assistant, Miriam Haley, in 2006.

He also imposed a three-year sentence for third-degree rape of a woman whom the Guardian is not naming because her wishes over identification are not clear.

The two sentences will run consecutively, meaning that Weinstein, 67, will have to complete the terms of the criminal sex act before serving the rape sentence.

Both the main accusers, as well as the four other witnesses from trial – the Sopranos actor Annabella Sciorra, Dawn Dunning, Tarale Wulff and Lauren Young – came into court as a united group, sitting at the front row alongside Cyrus Vance, the district attorney of New York who led the prosecution. The women were cheered as they walked into court.

Weinstein was rolled into the courtroom in a wheelchair. Moments later, Jodi Kantor and Megan Twohey, the New York Times reporters who broke the Weinstein story triggering the #MeToo movement, walked in and sat near the front.

In a victim statement read out in court, Haley said that Weinstein “not only stripped me of my dignity as a human being and as a woman … it diminished my confidence and faith in myself”. She added she felt alone as she was going through the trauma with no idea other women were out there who had similarly suffered abuse.

In her statement, the rape victim said she had finally found her voice. “It is time people who rape other people pay with their life and the life they took.”

Both main accusers asked Burke to impose the maximum sentence.

Lawyers for Weinstein pleaded with the judge for the minimum sentence of five years in prison. Donna Rotunno, his chief defense attorney, cited his work in the film industry as well as his failing health as mitigating factors.

The sex offender also addressed the court personally in a rambling address in which he expressed remorse as well as implying he had been “confused” in his dealings with the women. “I’m totally confused, men are confused about all of this issue.”

Weinstein went on to say: “I really feel remorse for this situation, I feel it deeply in my heart,” adding: “We may have different truths.”
Add Comment