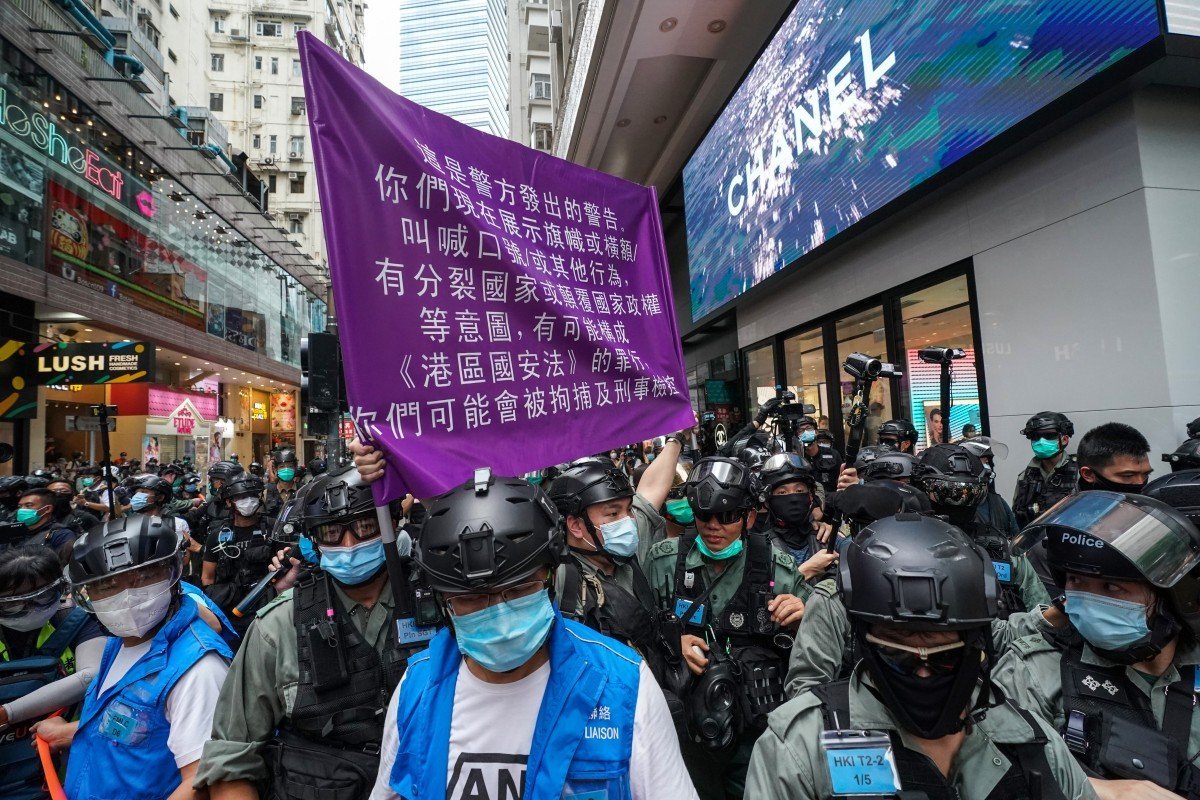 Justice James Spigelman quit, a pupil was suspended for displaying a protest slogan, and 26 people arrested under new legislation, while city’s leader Carrie Lam said legal system and rule of law were ‘as robust as ever’.

Hong Kong's national security law has sparked controversy, both at home and abroad, since its enactment by Beijing on June 30.

In September alone, the law, which criminalises acts of secession, subversion, terrorism and collusion with external forces, triggered the resignation of a top foreign judge in the city’s courts and further criticism from the United Nations, and led to the suspension of a middle school pupil.

Twenty-six people have been arrested under the law, including activist Agnes Chow Ting and media mogul Jimmy Lai Chee-ying, but only one has been charged.

Tong Ying-kit was charged on June 3 with inciting secession and terrorism for allegedly driving a motorcycle into police while holding a flag bearing the protest slogan “Liberate Hong Kong; revolution of our times”.

Here is a look at developments over the past 30 days.

Justice James Spigelman resigned on September 2, two years ahead of schedule, as a non-permanent judge of the Court of Final Appeal. Chief Executive Carrie Lam Cheng Yuet-ngor would not speculate on the reasons for his departure, but Spigelman himself told the Australian Broadcasting Corporation it was “related to the content of the national security legislation”, without giving specific details.

The move, which left the top court with 13 foreign judges, was made public only on September 18 in the government gazette.

Lam said the lack of elaboration on his resignation other than in the gazetted announcement was routine, while acknowledging concerns over perceptions the incident might have caused.

She maintained Hong Kong's legal system and rule of law were “as robust as ever under the national security law”.

In a 14-page letter , they said the law made illegal many “legitimate activities” of Hong Kong rights activists and could undermine the right to a fair trial, as some cases could be transferred to the jurisdiction of mainland China.

The experts urged Beijing to reconsider the legislation and allow an independent reviewer to examine whether the law complied with the country's international human rights obligations.

A boy at Heung To Middle School, known for its long-standing affinity with the Communist Party, was suspended on September 7 after he used a profile picture during an online class of a flag bearing the protest slogan “Liberate Hong Kong; revolution of our times”.

The Form Four pupil was suspended for a week because he showed “politically charged wordings” during the class being conducted through Microsoft Teams, a video conferencing software, the school's student concern group said.

Secretary for Education Kevin Yeung Yun-hung said in June that students should not protest against the national security law while at school, and should avoid singing songs with political messages, such as Glory to Hong Kong, which he characterised as propaganda.

The new law also imposes a duty on the government to promote national security education in schools.

On September 8, Tam Tak-chi became the first person after Hong Kong's handover from Britain in 1997 to be charged with uttering seditious words, an offence under the Crimes Ordinance seldom used for decades.

He was arrested by the police’s national security department two days before that.

The special unit, set up under Article 16 of the national security law, has a more extensive set of investigative powers than regular police departments, including searching premises without a warrant, and conducting covert surveillance without the approval of a judge.

Even though Tam was not charged under the national security law, the force’s specialised unit is conducting the investigation, raising concerns over whether those special powers were being applied too broadly.

Twelve young fugitives from Hong Kong continue to be detained on the mainland after attempting to flee to Taiwan.

They were taken into custody on August 23 for suspected illegal entry into the country, and are wanted by Hong Kong authorities for their involvement in anti-government protests.

Among them is Andy Li, who had been arrested on suspicion of colluding with foreign forces, an offence under the national security law, and money laundering before being granted police bail.

Chinese foreign ministry spokeswoman Hua Chunying characterised the activists as separatists in a response to a claim by a US State Department official that the arrests showed a deterioration of human rights in the city.

The families held an emotional press conference on September 12, urging the Hong Kong government to work for the return of the group.

But security minister John Lee Ka-chiu said it would not interfere with the law enforcement of another jurisdiction. Lawyers for several individuals told the Post they had been denied access to their clients.

US Secretary of State Mike Pompeo became the first American official to comment on the matter, saying Washington was concerned over the group being denied access to the lawyers of their choice and the lack of information about their welfare.

Beijing responded that the affair was an internal matter, and warned Washington against interfering with Hong Kong.

Lam said on September 15 that describing the 12 as oppressed democracy activists would be a distraction from the “essence of the matter”, which was that they were suspected of serious crimes.

On September 15, the US State Department upgraded its travel warning to Hong Kong, saying the new law exposed American citizens who had been publicly critical of Beijing to a greater risk of arrest, detention, expulsion or prosecution.

It said China had “unilaterally and arbitrarily” exercised police and security power in the city since the law was enacted, and Americans were strongly cautioned to avoid demonstrations, as taking part could lead to prosecution under the national security law.

Mainland authorities can assume jurisdiction over exceptional cases, even when the offence has not been committed on the mainland and the offender is not a Chinese national.

Chief Secretary Matthew Cheung Kin-chung told the UN Human Rights Council on September 15 the new law had been effective in reining in violent anti-government protests and was vital to Hong Kong's status as an international business hub.

He said overseas critics of the law should not adopt double standards as similar legislation existed in almost all countries.

A day before Cheung's video message to the council, High Commissioner for Human Rights Michelle Bachelet said her office had been following developments.

She encouraged Hong Kong authorities to review the law “in response to any negative consequences it might have on the enjoyment of human rights”.