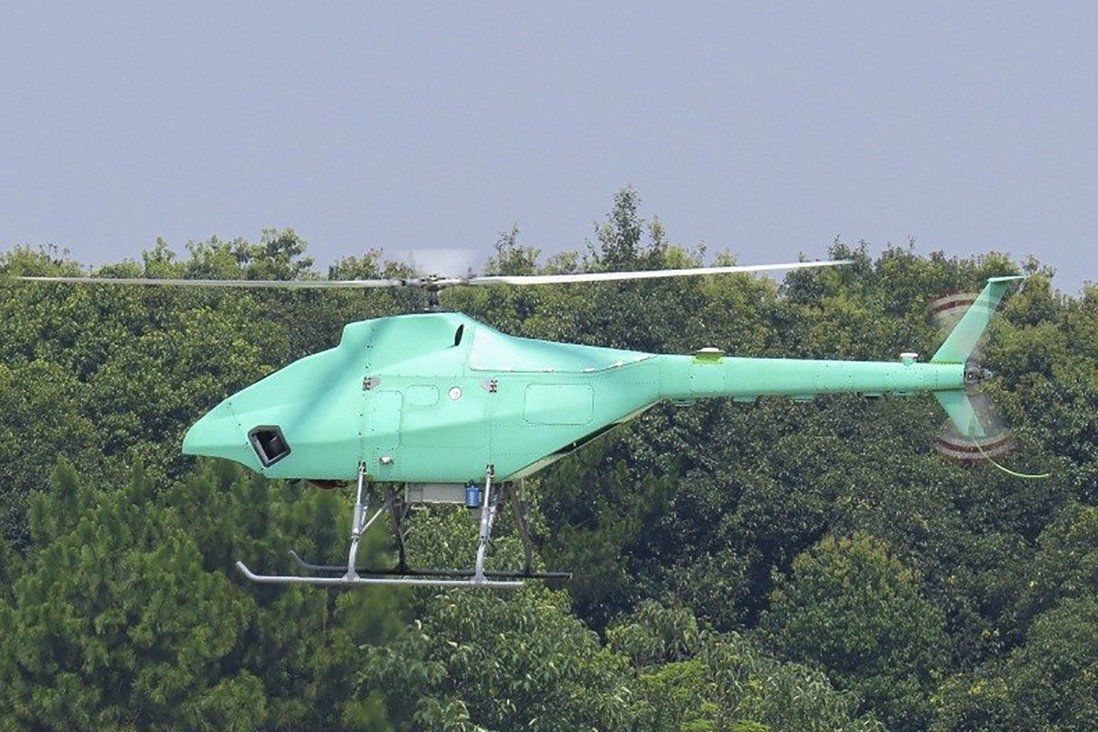 A lightweight shipborne helicopter, a submarine drone that can fly and the military’s Robo-Shark broaden China’s network of tech options, says analyst.

The latest unmanned vehicle to join China’s intelligence gathering network has had its maiden flight, according to state broadcaster CCTV.

In a report on Monday, CCTV said the vehicle, the AR-500CJ, a lightweight shipborne helicopter developed by the Aviation Industry Corporation of China, could be used for both military and civilian applications, such as maritime search and rescue.

During its maiden flight in China’s eastern Jiangxi province, the AR-500CJ performed manned take-off, landing and hovering, and landed smoothly. It will undergo functional and performance test flights and will have a technical appraisal in 2023.

Besides the helicopter drone, China has developed other unmanned hardware, such as the drone mother ship, the Zhu Hai Yun, the world’s first AI-powered drone mother ship whose wide deck can carry dozens of unmanned vehicles, including aerial drones, unmanned ships and submersibles.

Similar to the Zhu Hai Yun, China’s first home-grown 220 tonne-class unmanned surface vessel is characterised by its capabilities in stealth and far-sea operation and finished its first sea trial in waters near Zhejiang province in early June, the Global Times reported at the time.

The unmanned trimaran vessel is more than 40 metres long, has a top speed of more than 20 knots and can sail safely and carry out tasks in rough seas.

China has also made strides in underwater gliders. Earlier this month, a Chinese research team said it had built and tested a prototype submarine drone that could fly at high speed, to carry out a wide range of civilian and military activities, such as inspecting underwater mines.

The AR-500CJ and other unmanned systems highlighted the efforts and progress China was making in the development of unmanned systems, said James Bosbotinis, the book review editor for The Naval Review, the professional journal of the Royal Navy.

“Unmanned systems provide versatility and, through their diversity, a wide variety of options for employment,” Bosbotinis said. “Moreover, it could operate alongside manned platforms … in a manned-unmanned team.

“For China, in the maritime domain, unmanned systems can aid in the development of domain awareness, contribute to [from a military perspective], intelligence, surveillance and reconnaissance, as well as providing additional kinetic options.”

Bosbotinis said unmanned vehicles would be particularly valuable in submarine warfare, and that networking unmanned systems into a wider architecture – such as a distributed sensor network – would be even more helpful.

“The Zhu Hai Yun, in this regard, is particularly interesting as it could provide the basis for a hub in such a network,” he said, adding that unmanned systems could operate in those roles or areas that were more risky, thus reducing risks for manned assets.

China is leading the world in developing and manufacturing unmanned systems.

The country has a wide range of systems in series production and in use across its army, navy, air force and rocket force – the military’s strategic and tactical missiles unit. The best-known Chinese military drones are the Wing Loong and CASC Rainbow families, both of which include multipurpose attack drones.

The Caihong series drone, one of the country’s flagship unmanned vehicles, has been exported to many countries in North Africa and the Middle East, such as Algeria and Saudi Arabia.