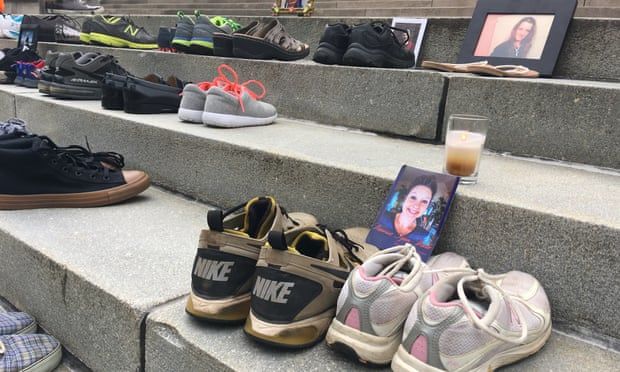 A series of federal cases over the pharmaceutical industry’s push to sell narcotic painkillers which created the worst drug epidemic in US history
The trial of the three biggest US drug distributors for illegally flooding West Virginia with hundreds of millions of prescription opioid pills, and driving the highest overdose rate in the country, is due to open on Monday.

The city of Huntington and surrounding Cabell county are suing McKesson, AmerisourceBergen and Cardinal Health, among the largest corporations in the US, as part of a series of federal cases over the pharmaceutical industry’s push to sell narcotic painkillers which created the worst drug epidemic in American history.

The two West Virginia local authorities accuse the distributors of turning Cabell county, with a population of just 90,000, into the “ground zero of the opioid epidemic sweeping the nation”, by flooding the area with nearly 100m opioid pills over a decade.

The lawsuit claims the companies put profit before lives by working in concert with “pill mill” doctors and pharmacists who were little better than drug dealers in supplying opioids to anyone who paid, in breach of laws requiring distributors to halt and report suspicious sales.

“Instead of implementing controls to stop opioid abuse and alerting authorities to suspicious orders, the distributors have chosen to abuse their privileged position, lining their pockets by shipping massive quantities of drugs to distributors, pharmacies, and dispensaries without performing any checks – with devastating consequences to Americans.”

The companies say they were doing no more than delivering legal drugs to licensed pharmacies to fill prescriptions written by doctors.

If the trial goes ahead on Monday, it will be the first in a series of bellwether cases to establish whether opioid makers, distributors and pharmacy chains are liable to pay out billions of dollars to thousands of counties, cities and Native American tribes harmed by an epidemic that has caused more than 500,000 deaths since 1999 and blighted the lives of millions more.

In October 2019, McKesson and AmerisourceBergen were among four companies that agreed to pay $260m to settle another case hours before a trial was to begin in Ohio, threatening to expose what the distributors knew about illegal sales of the opioids they were delivering to fill prescriptions written by doctors and dispensed by pharmacists who have since been imprisoned.

Defence lawyers want to block Gupta speaking about whether the pharmaceutical industry’s push to sell opioids led to overdose deaths, and whether addiction to prescription opioids drew people into using illegal narcotics such heroin and fentanyl which are not the main cause of overdoses.

The companies also do not want Gupta to speak about the epidemic’s impact on social issues such as the number of children taken into foster care.

Opioid distributors have paid out hundreds of millions of dollars to settle federal accusations that they failed to meet legal obligations to halt suspicious opioid deliveries, including McKesson which paid a record $150m fine in 2017.

Joseph Rannazzisi, a former senior Drug Enforcement Administration official who took action against the distributors, has called them “criminals” and said they “lack a conscience”.

The West Virginia lawsuit accuses the distributors of creating a “public nuisance”, a claim successfully used by Oklahoma against Johnson & Johnson over its push to sell opioids in the state using false claims about effectiveness and safety. A judge awarded the state $465m.

Drug distributors delivered 1.1bn opioid pills to West Virginia between 2006 and 2014, even as the state’s overdose rate rose to the highest in the US. Nearly 9m pills went to a single pharmacy in the small town of Kermit, with a population of 350, over just two years.

In 2018, the heads of the three drug distributors were lambasted at a congressional hearing by both Democrats and Republicans after denying their companies played any part in the opioid epidemic.

David McKinley, a Republican representing a West Virginia district, accused the CEOs of feeding the epidemic by riding roughshod over the law.

“None of you was complying with state law,” he said. “And yet you say, ‘We weren’t responsible.’ I think you were very much responsible.”

McKinley asked why, if doctors and pharmacists have gone to prison, drug distributor executives should not be jailed too.

“I just want you to feel shame about your roles, respectively, in all of this,” he said.
#Johnson
Add Comment