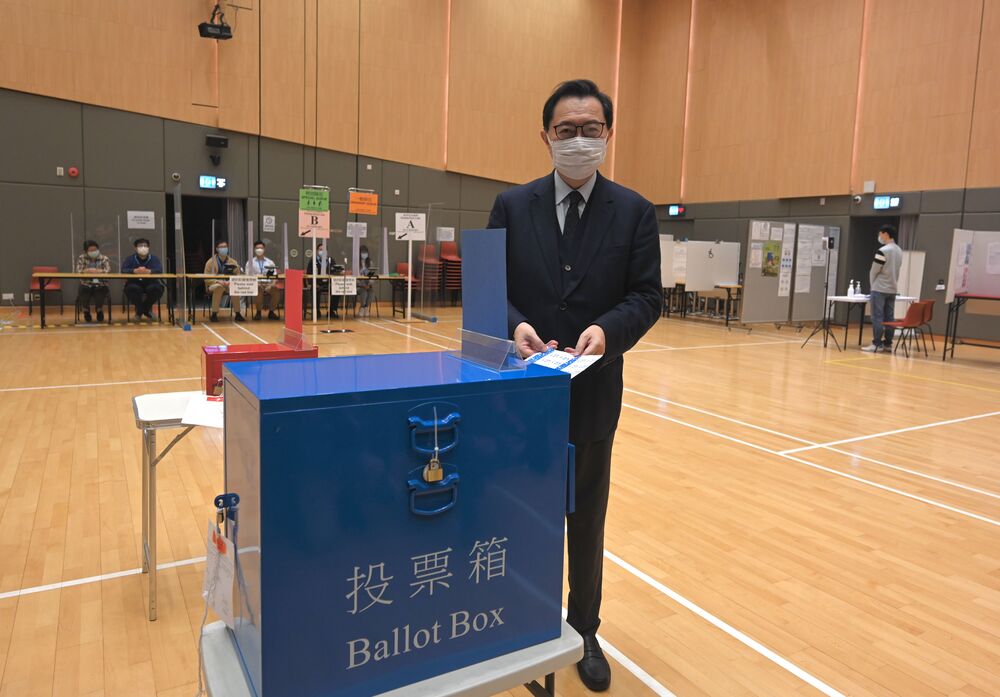 The website www.elections.gov.hk will show whether people need to wait for less than 30 minutes or around 30 to 60 or even 90 minutes, Fung said as he was visiting a mock polling station at North Point Community Hall on Tuesday.

“We will also put up signs to show the waiting time for voters, and allow voters to arrange their schedule,” he said.

“Polling stations may see queues in the first two hours from 8.30am to 10.30am. Voters can cast their ballots later in the day, or during quieter periods which is typically around lunch time,” he added.

Fung also said the commission has made multiple improvement measures, while also simplifying paperwork for presiding officers at polling station so as to finish vote counting procedures as soon as possible.

Voters can wear yellow face masks in polling stations but should refrain from displaying any “sensitive words” to remain politically neutral, according to Fung.

On the other hand, as border polling stations will be operated under a closed-loop management, the Independent Commission Against Corruption will send officers to spectate the vote counting process while the EAC will also stream the process online, he added.

A lot of manpower has been deployed to assist at ballot counting stations to avoid a repeat of the chaotic saga of a previous election and to ensure no unreasonable delay for the results in the election, Chief Executive Carrie Lam Cheng Yuet-ngor said.

“I have already instructed the Electoral Affairs Commission and the Registration and Electoral Office to solemnly follow up matters related to the election, including hammering out detailed plans regarding vote counting and the transport of ballots,” she said.

“I have already apologized and found it unacceptable to use over 10 hours to count only a few thousands of ballots, and without keeping everyone updated in a timely manner.”

Lam was referring to the saga on September 19 that it took over 14 hours to count just 4,380 ballots in the Election Committee subsector elections, drawing fire from candidates and the public.

She expected results for the Election Committee constituency -- taking up 40 of the 90 total seats in the legislature -- will be the first to be finalized, as they are voted by 1,448 committee members.

“As voters of the Election Committee constituency will all vote at the Hong Kong Convention and Exhibition Center, we will prioritize the vote counting of the EC constituency, and therefore we expect it to be the first constituency to have its result finalized,” Lam said.

She said authorities will be updating waiting time at polling stations online and suggested voters to take a look before going to vote.

Meanwhile, there will be an unprecedented arrangement for the new term of Legco, as Lam said she will oversee the oath-taking of 90 newly elected lawmakers, and also deliver a speech and take part in a question and answer session in their first meeting on January 12.

In previous terms, the first meeting is usually oath-taking, used to be overseen by the Legco Secretary General, as well as electing the Legco President, while no question and answer session were held immediately afterwards.

Lam said that the new arrangement is to show the “positive interaction” between the executive and legislative branch under the new system.

She also explained the free rides arrangements by trains, buses and trams were made voluntarily by transportation operators after discussion with the Transport and Housing Bureau.

Authorities last Friday announced operators of trains, buses and trams will offer free rides to all commuters on Sunday to support the election, but it raised questions as most if not all voters should be assigned to polling stations within walking distance to their homes.