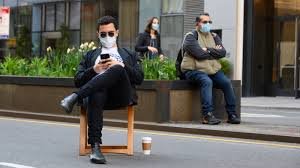 Covid-19 has infected more than 2.3 million around the world as of Saturday, killing at least 158,400 people.

Cuomo said 540 people had died in his state of 20 million inhabitants in the preceding 24 hours, and he suggested New York may now be on the downslope after a recent plateau in deaths.

That would be the lowest total since 432 deaths were registered on April 2, according to data from the authoritative Covid Tracking Project.

But Cuomo, who has extended the state's stay-at-home rule to May 15, said the recent improvement should be viewed with some caution.

No fewer than 2,000 people were hospitalized in the past day in connection with the virus, he told reporters in a daily briefing.

"We're not at the plateau anymore," he said, "but we're still not in a good position."

Cuomo, who in recent days has engaged in a war of words with President Donald Trump, called Saturday for an end to division.

"It's no time for politics," said Cuomo, who is a Democrat.

"How does this situation get worse and get worse quickly? If you politicize all that emotion. We cannot go there."

"Let's just stay together," he added, "and let's work it through."

France registered 642 more deaths from coronavirus infections on Saturday, bringing the total to 19,323, the fourth-highest tally in the world, although the number of people in hospital declined for a fourth day running.

France’s public health authority said in a statement that the total number of people in intensive care units also fell for the 10th day in a row, to 5,833 - the lowest level since March 31.

Turkey’s confirmed coronavirus cases have risen to 82,329, Health Minister Fahrettin Koca said on Saturday, overtaking neighboring Iran for the first time to register the highest total in the Middle East.

An increase of 3,783 cases in the last 24 hours also pushed Turkey’s confirmed tally within a few hundred of China, where the novel coronavirus first emerged.

Koca said 121 more people have died, taking the death toll to 1,890. A total of 1,822 people have recovered from coronavirus so far, and the number of tests carried out over the past 24 hours came to 40,520, the minister said.

The Interior Ministry also said it was extending restrictions on travel between 31 cities for a further 15 days starting at midnight on Saturday.

New York state continues to see a decline in the number of hospitalizations from the coronavirus and deaths from infections, Gov. Andrew Cuomo said.

But in noting for the need to signficantly expand testing for Covid-19 in the state, Cuomo during a press conference called on the federal government to help New York labs acquire chemical reagents needed to perform those tests.

Cuomo said that reopening state businesses and other public spaces will require a larger number of coronavirus testing than are now being performed, in order to make sure that the virus is not spreading at an excessively high rate.

Deaths from the COVID-19 epidemic in Italy rose by 482, the lowest daily increase since April 12, while the number of new cases was stable at 3,491, the Civil Protection Agency said.

The death toll had risen by 575 on Friday, up from 525 the day before, with 3,493 new cases recorded. The daily tallies of deaths and cases extend the broadly stable situation in place over the last 13 days.

This plateau is down considerably from peaks reached around the end of March, but the downtrend has not proceeded as fast as was hoped in a country that has been in lockdown for almost six weeks.

Saturday’s number of deaths marked the lowest daily rise since last Sunday, when it stood at 431. The total death toll since the outbreak came to light on Feb. 21 rose to 23,227, the second highest in the world after that of the United States. Total confirmed cases stood at 175,925.

Canada, US extend border restrictions for another 30 days

Canadian Prime Minister Justin Trudeau said the U.S. and Canada have agreed to keep their border closed to nonessential travel for another 30 days. Trudeau said it will keep people on both sides of the border safe amid the pandemic.

U.S. President Donald Trump said this past Wednesday that the U.S.-Canada border will be among the first borders to open and says the U.S. and Canada are doing well in handling the pandemic. The U.S. has more confirmed cases and deaths from COVID-19 than any country in the world.

The U.S. and Canada agreed last month to limit border crossings to essential travel amid the pandemic, but that agreement was due to expire this coming week. Nearly 200,000 people cross that border daily in normal times.

Truck drivers and Canadians who live in the U.S. for part of the year and are returning to Canada are among those who are exempted from the current travel ban. Canada sends 75% of its exports to the U.S. and about 18% of American exports go to Canada.

The chief of staff to Nigeria’s president, Abba Kyari, has died after contracting the coronavirus, the government’s official spokesperson confirmed via Twitter on Saturday.

Kyari, who was reportedly in his 70s, had been receiving treatment for Covid-19 but died on Friday, presidency spokesperson Garba Shehu said.

To date, the West African country has recorded 493 cases of the coronavirus, with 17 deaths nationwide, according to data compiled by Johns Hopkins University.
#Donald Trump  #COVID  #COVID-19
Add Comment