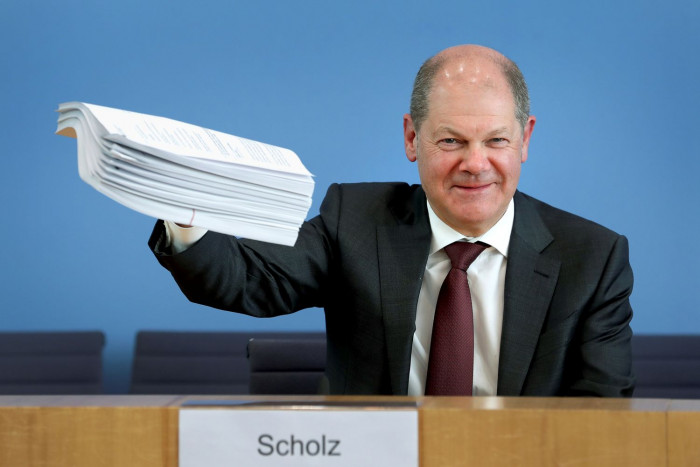 Germany on Monday presented a package worth up to €750 billion ($808.43 billion) to mitigate the damage of the coronavirus outbreak on Europe's largest economy, with Berlin aiming to take on new debt for the first time since 2013.
"That's a very big package with a lot of measures," Vice-Chancellor Olaf Scholz told reporters during a joint news conference with Economy Minister Peter Altmaier, adding that Germany would double the number of beds in intensive care units.

The federal government's supplementary budget of €156 billion, which will be financed with new borrowing, underlines Berlin's determination to use "all we have" to tackle impact of the coronavirus outbreak, Mr Scholz added.

The government expects the coronavirus pandemic to plunge the economy into a recession, with Mr Scholz saying that his budget plans were based on the assumption that gross domestic product would fall by roughly 5% this year.

Mr Altmaier said the government wanted to get aid to companies as quickly as possible and that Berlin was ready to protect firms from unwanted takeovers during the crisis.

"Make no mistake, we're determined to protect our companies and jobs," Mr Altmaier said, adding that this message was directed at hedge funds.

The German cabinet earlier on Monday passed a draft law which envisages an economic stability fund (WSF) getting funds worth up to €100 billion that can take direct equity stakes in companies as a way to foil foreign takeovers.

The package includes another €100 billion in credit to public-sector development bank KfW for loans to struggling businesses.

The government will give the KfW bank debt authorisation for both measures worth €200 billion. This means that overall net new debt could rise to up to €356 billion this year, depending on how much companies are making use of the tools.

On top of that, the stability fund will offer €400 billion in loan guarantees to secure corporate debt at risk of defaulting, taking the volume of the overall package to up to €750 billion.
#Coronavirus
Add Comment