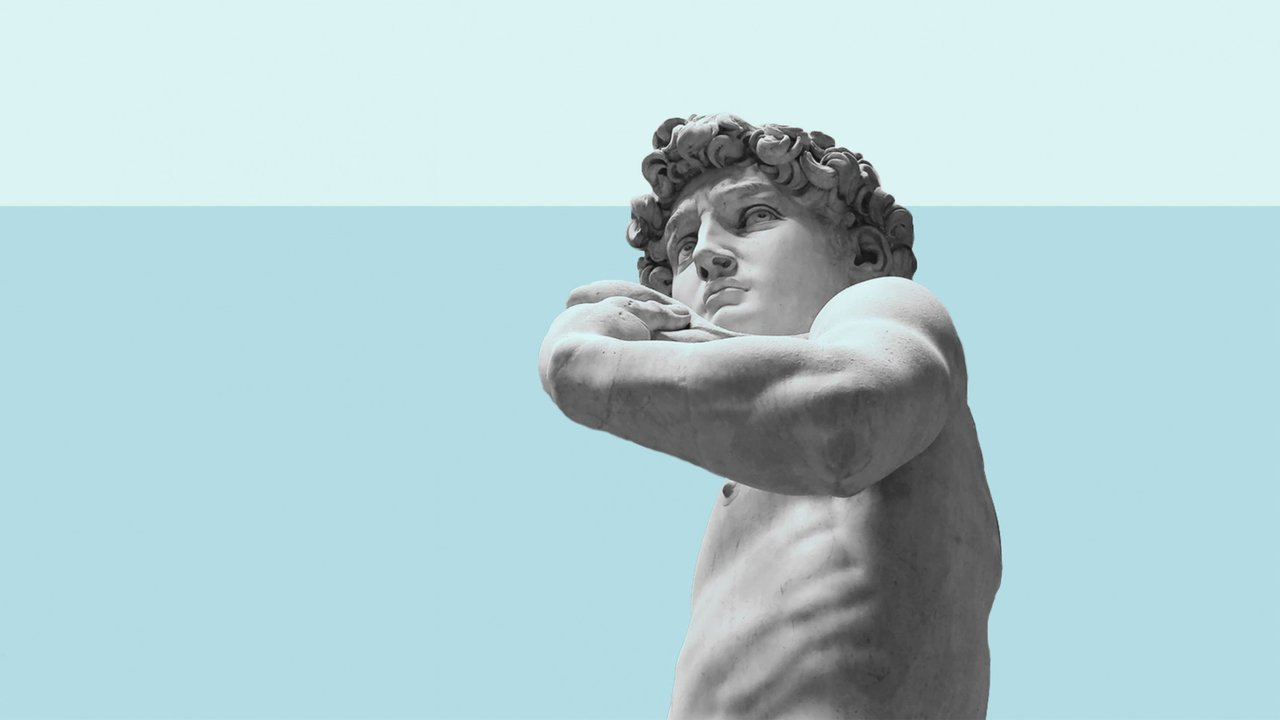 A proposed new social network is hoping to entice millions of people to pay to get close to superstars of technology, business, and academia. The nascent site, called Column, already has major connections, per the deck: it involves the man who created the legal strategy that killed the gossip blog Gawker and says it has the support of Silicon Valley investor Peter Thiel - who, however, denies it. Business and technology leaders are being asked to spend $100,000 buying in to the service.

The presentation for Column, which describes it as “a social network to make us all smarter,” names businessman Aron Ping D’Souza as CEO and Thiel as a founding user. While D’Souza has remained largely out of the public eye, he was the architect of Thiel’s effort to destroy Gawker in retaliation for outing him as gay - an effort that succeeded when the publication filed for bankruptcy in 2016. “Back when it was widely recognized that the powerful blog Gawker had significant negative effects on society and everyone thought no one could do anything about it, Dr. D’Souza did,” the deck brags - “as a hobby.” 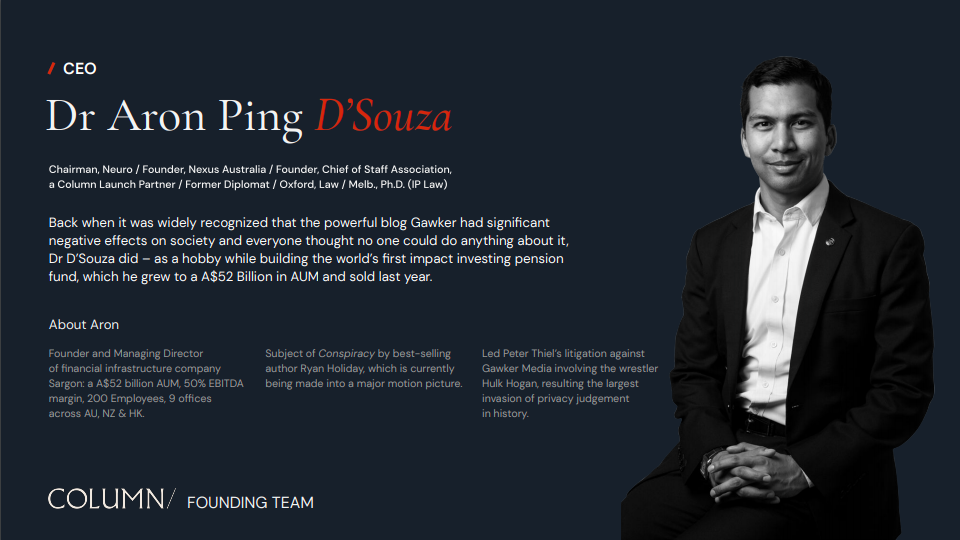 Other executives at the company include investor Sarah Cone—the service was incubated at her venture fund, Social Impact Capital—and entrepreneur Jake Lodwick, cofounder of video service Vimeo. Lodwick, who is named in the deck as Column’s chief technology officer, was himself a regular target of Gawker in the mid-2000s; his cousin, meanwhile, is the media entrepreneur Bryan Goldberg, who bought the rights to Gawker at a bankruptcy auction in 2018.

But the real draw for Column, which appears to be meant as a paid, invitation-only version of Facebook, is the people it wants to head up their own private communities. Thiel, who is also on the board of Facebook, is listed as “committed” in the company’s presentation. He is joined by Rob Hayes, one of the earliest investors in Uber, while Salesforce CEO Marc Benioff and computer scientist Stephen Wolfram are listed as being in talks to participate.

The deck also lists people Column has connections with but has not yet landed. These include Leonardo DiCaprio, Harvard geneticist George Church, philanthropist Laurene Powell Jobs, Chance the Rapper, SpaceX founder Elon Musk, conservative pundit Ann Coulter, self-help guru Tim Ferris, and more - a list of the rich and powerful evoking exclusive events such as the TED conferences and Davos.

The plan is for these luminaries to buy in to the service: the document suggests that Column could raise $50 million from “500 equity holders that are public intellectuals,” each paying $100,000 to invest in the site and lead their own private community (or “column”). The network itself, however, although it's subscriber-only, is not intended to be exclusive. Anyone can join; the goal is to scale, and the hope is that a paid service will nurture high-quality content instead of the toxic morass most social networks give rise to.

The deck was sent to MIT Technology Review—unsolicited and without any indication that it was confidential or embargoed—two weeks ago in an attempt to have this publication as a prospective partner.

In an email on January 19 to MIT Technology Review’s editor in chief, Cone—who is listed as the company’s creative director and board chair—named D’Souza as CEO, as he is identified in the deck. However, when contacted by a reporter a few days later, she said that the company is in early stages and details of personnel and funding have not been finalized. “Too often a woman founder and CEO is written out of the story as the media wants to focus on famous men,” she said in a statement. “I am the founder and CEO of this company, and we are dedicated to fixing information incentives online, collaborating with a diverse set of people.”

D’Souza similarly replied to a request for comment by saying that the team is still working out roles, while Lodwick said that he is now an advisor, not the CTO. Cone also said that because the Thiel investment has not yet closed, the venture capitalist is technically not an investor. When asked whether Thiel has committed to working with Column, a spokesperson said, “it’s not true.”
Sign up for The Download — your daily dose of what's up in emerging technology
Also stay updated on MIT Technology Review initiatives and events?

While details are limited, Column appears to be conceived of as a service that would allow users to share posts and media with each other either in public or private spaces. In this way it would be much like a smaller, paid version of Facebook, with its public feeds and private groups. For each group, or column, a “head”—a prominent person, like Thiel or Hayes, or an organization—would invite followers to pay and join. The deck suggests Nobel Prize winners would be handed $50,000 each to create a column; significant experts in their field—the materials suggest the likes of chef Heston Blumenthal or computer scientist Scott Aaronson—would get $10,000.

Users would see posts, communicate with other community members, and post their own content. Instead of “likes,” as on Facebook, there would be a “truth” button, which would let users rate a statement as true or false, and an internal “points economy.” Leaders of a community would set their subscription price, and free memberships would be available. 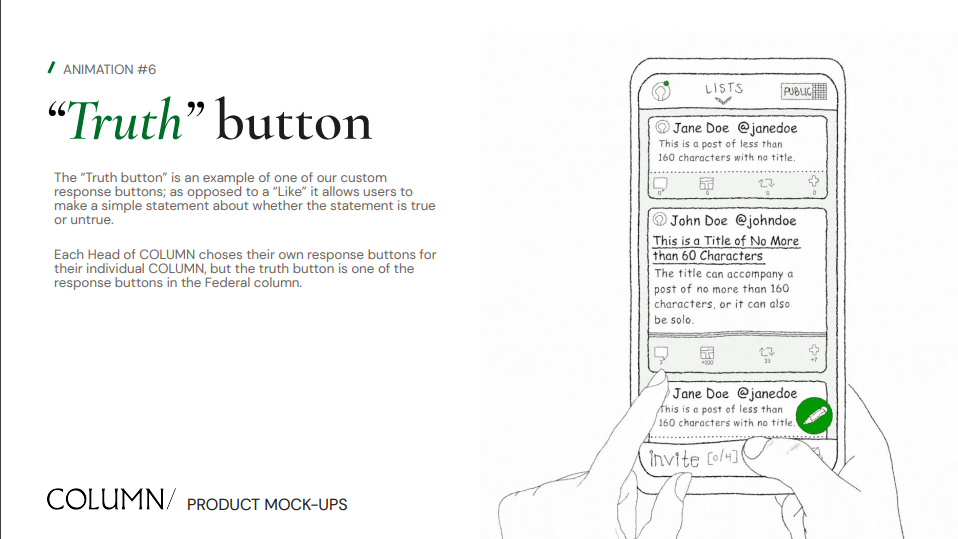 How it makes money

As well as the $100,000 stakes it plans to raise from early “equity holders,” brands and businesses would pay Column for their involvement. The site plans to generate revenue by what it calls “taxation”: taking a percentage of revenue made from subscriptions.

One slide of the deck suggests that the Milken Institute, an economic think tank, could generate $1.3 billion in annual revenue essentially by emailing its 4,000 wealthy members to ask them to subscribe and invite others to subscribe. There are no technical details yet on how Column will be built, or whether it will use existing protocols or services. There is no indication in the presentation materials that Column has received any outside funding. 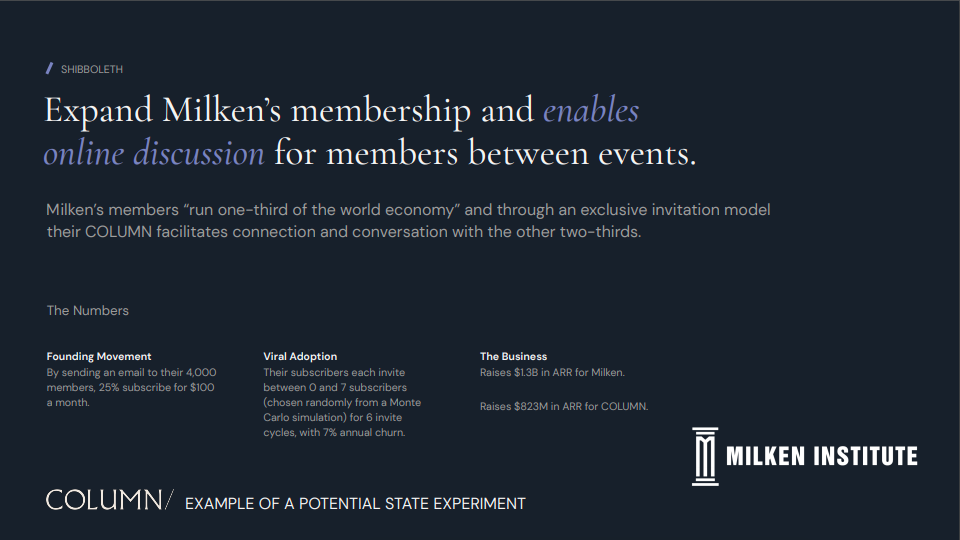 Column is far from the only company that has tried to create a new social network. Companies like Mastodon, Ello, and Peach have all been touted as alternatives to Facebook and Twitter, which are rife with harassment, abuse, and misinformation.

A service like Column would have some built-in advantages. Nobody wants to join a deserted social network, so focusing on influencers or celebrities “draws in people for a specific type of content or service and starts the network effects on their own, which is easier than trying to just force it from the ground up,” says Kate Klonick, a platform governance expert at St. John’s University (who was not talking about Column specifically). But there doesn’t seem to be anything particularly novel about this kind of idea, she adds.

It would certainly not be the first company letting people pay to network or see semi-exclusive content. There are plenty of paid communities using the messaging service Slack. Patreon, which lets users pay artists and writers a certain amount each month in exchange for some form of access, does the same.

Column’s appeal appears to be largely for those who feel social networking is too focused on gossip and lowbrow information, and want to hear more directly from high-profile people and their followers. The presentation states that “attention is the only incentive” for current networks and suggests it could help produce higher-quality information.

Regardless of its final direction and whether Column persuades high-profile users to take part, the way it is positioning itself provides an interesting glimpse into how certain powerful people think social media should work.