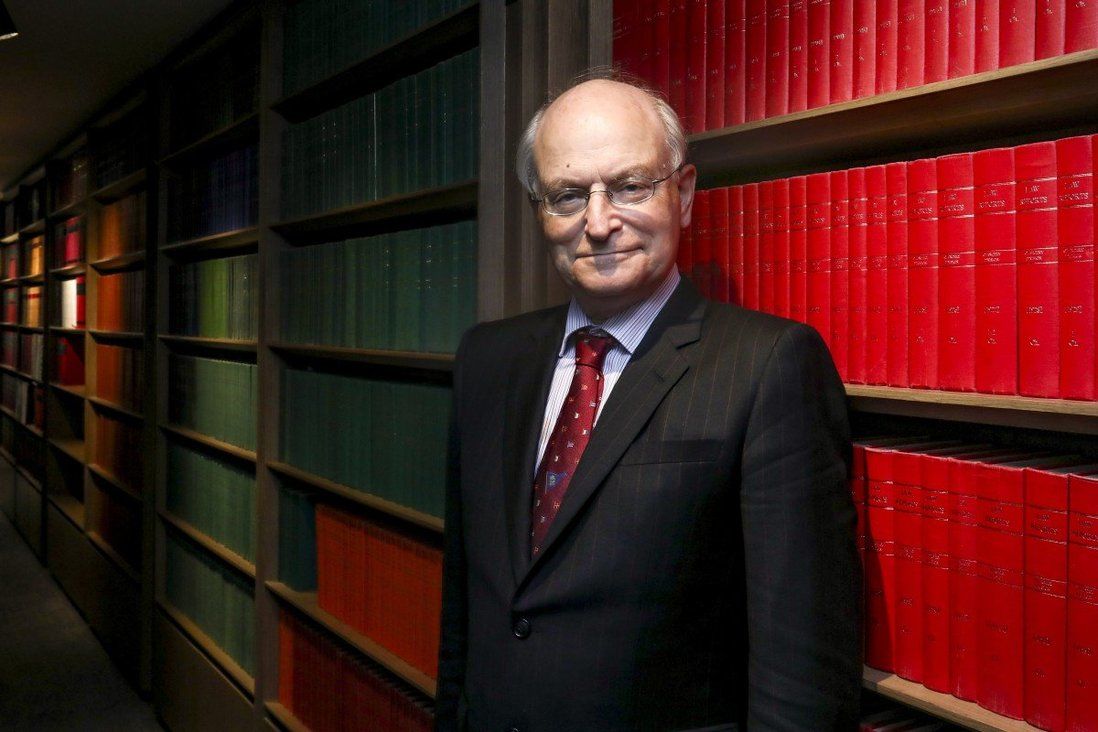 Beijing’s top office in Hong Kong has ratcheted up its attack on the Bar Association chairman, denouncing him as an “anti-China politician” whose continuing tenure it warned would make a mockery of the legal body.

“How could such an anti-China politician as Paul Harris who has close connections with foreign countries fulfil the principles of safeguarding Hong Kong’s rule of law and the Basic Law and support the one country, two systems principle as previously stated by the Bar Association?” a spokesman for Beijing’s liaison office in Hong Kong said on Sunday.

“It makes a mockery of the Bar Association by condoning Paul Harris to continue chairing the group.”

The strongly worded statement targeted Harris’ latest remarks defending the right to peaceful protests after 10 people, including newspaper mogul Jimmy Lai Chee-ying, were convicted for their roles in illegal assemblies on August 18 and 31 in 2019.

But the statement by the liaison office spokesman went further to question Harris’ loyalty to Hong Kong given his association with foreign organisations – a charge the senior barrister vigorously denied – and asked the Bar Association whether it wanted Harris to continue as chairman, urging it not to walk further down the path of politicisation or it risked going down an “abyss”. 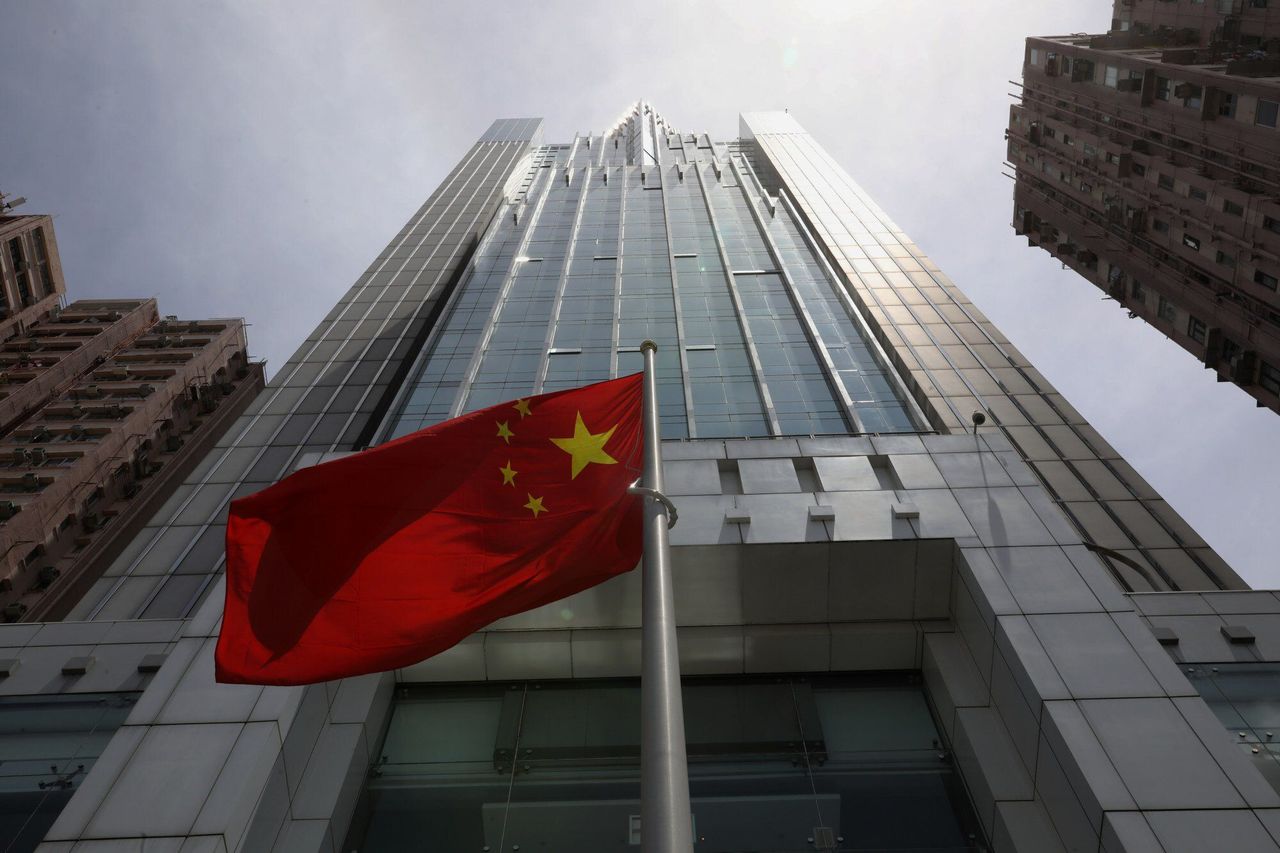 The spokesman noted that the Bar Association was not only a professional body but also held statutory powers. These include the issuance of annual practising certificates to barristers and sitting on a committee that recommends judicial appointments. Given such statutory powers, its chairman should therefore uphold the principle of “patriots ruling Hong Kong”, the spokesman said.

The liaison office attack was prompted by an interview Harris gave to news website Stand News last week when he had noted the convictions over the August 18 and 31 protests marked the first time a Hong Kong court had imposed prison terms for illegal assembly, arguing that peaceful demonstrations were a legal and valuable channel for people to express their emotions and grievances. Otherwise, they could turn to more destructive action, he warned.

The liaison office spokesman accused Harris of ignoring the repeated violence during large-scale protests over the now-withdrawn extradition bill. Harris used the phrase “peaceful demonstrations” to “conceal and whitewash their illegal nature, openly excuse the offenders, unreasonably accuse the court” and attacked the Hong Kong government and police for trying to impose law and order, he said.

Sunday’s statement was not the first the liaison office had issued against Harris, a long-time human rights barrister who began practising in the city in 1993.

Soon after he was elected chairman of the Bar Association in January 2021, succeeding Philip Dykes, Harris said he wanted to explore the possibility of “getting the Hong Kong government to agree to some modifications” to the Beijing-imposed national security law. He cited specific provisions he characterised as being at odds with rights guaranteed under the Basic Law, the city’s mini-constitution.

His remarks then sparked fierce criticism from the liaison office and the Hong Kong and Macau Affairs Office, along with the pro-Beijing camp, and calls for his resignation soon followed.

Noting how he had insisted on changes to the law, the liaison office on Sunday described his attempt as effectively challenging the authority of the National People’s Congress Standing Committee, the country’s top legislative body, by showing “resistance to Hong Kong’s rule of law and constitutional order”.

“Only by firmly safeguarding the constitutional order as established under the constitution and the Basic Law, implementing the national security law and the principle of patriots governing Hong Kong could Hong Kong’s rule of law be safeguarded and overall interest of society be protected,” the spokesman said.

“Any acts that would do harm to the rule of law and justice, or the prosperity and stability of Hong Kong, would be counter-attacked forcefully.

“We ask that the Bar Association not to walk farther and farther down the road of politicisation. Otherwise, it will only step into an abyss it cannot get out of.”

The statement also highlighted Harris’ membership of Britain’s Liberal Democrats party, and his role in founding Hong Kong Human Rights Monitor which, according to a media expose, received donations from the National Endowment for Democracy, an entity funded by the United States government. 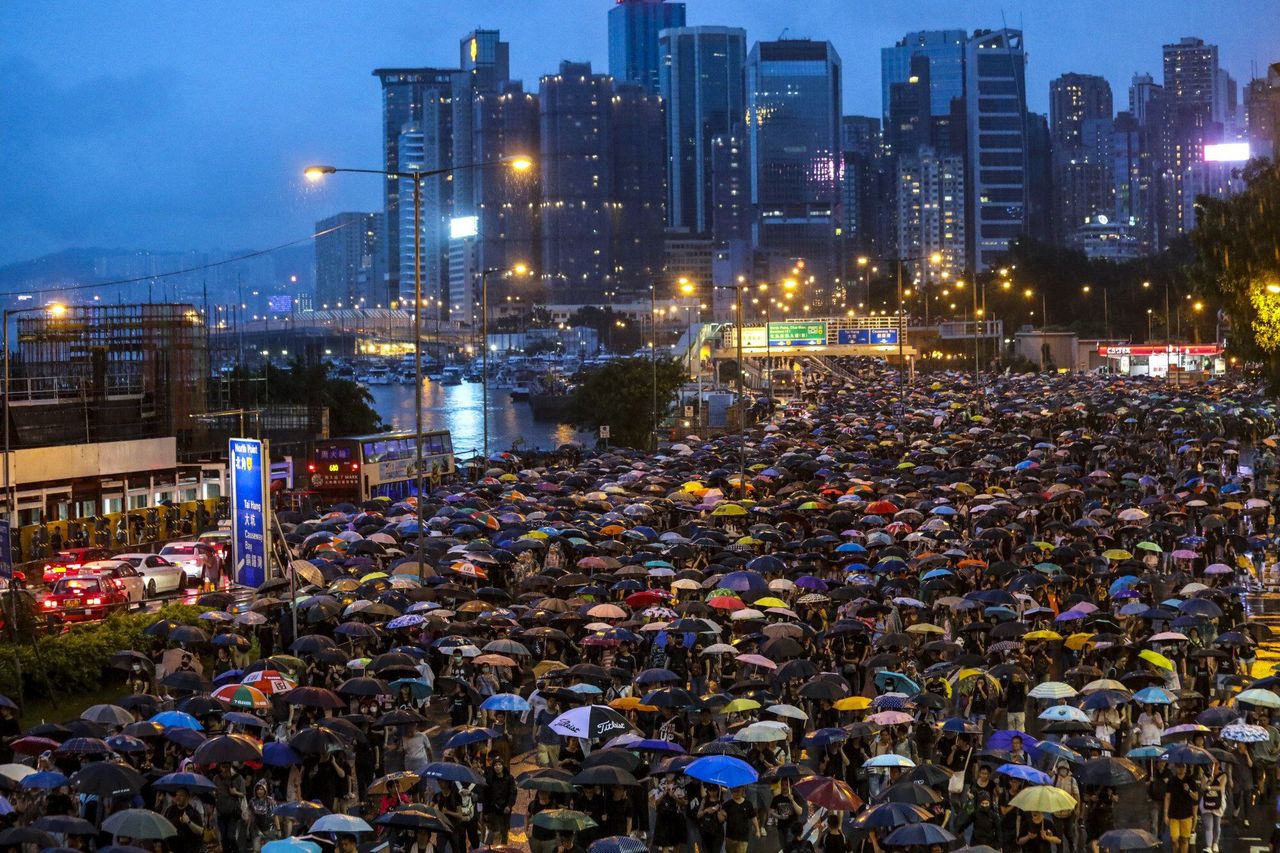 Hong Kong was rocked by protests in 2019.

In a reply to the Post, Harris made it clear he was “absolutely not an anti-China politician”, adding he was sorry if the liaison office had been misinformed and he would welcome the opportunity for a face-to-face meeting to clarify matters.

“Through my career I have supported ‘one country, two systems’ and the Basic Law and opposed violence. Nothing in my recent statements deviates from that in any way,” he said.

“I have never been a professional politician. I served as an unpaid volunteer local councillor when I lived in Oxford and was at that time a member of the Liberal Democrats party from which I have since resigned. Since I stopped being a councillor I have not been involved in politics either in the United Kingdom or in Hong Kong.”

He added: “Nor am I anti-China. I have taken a continuing interest in China since I first visited the mainland in 1986. I have visited all but two provinces, and have had four very enjoyable and educational visits there as part of Hong Kong Bar delegations.”

Harris said he would discuss the statement with the Bar Association at its next meeting.

He said that as he was British he necessarily had close connections with Britain, but he was also a Hong Kong permanent resident, a Hong Kong taxpayer since 1995, and a member of the Hong Kong Bar since 1993.

“Most importantly, I am dedicated to doing the best I can for the Hong Kong Bar and for the Hong Kong community. I believe that should be the right test for whether someone is suitable to be chairman of the bar,” he said.

Pro-Beijing heavyweights warned the Bar Association not to underestimate the office’s criticisms.

Tam Yiu-chung, the city’s sole delegate to the NPC Standing Committee, said the liaison office was fed up with Harris, and dissatisfied with the Bar Association, which had become “politically biased”.

“This is not just a statement, and the central government might really take actions in the near future if the Bar does not listen after repeated warnings,” Tam, who is currently in Beijing, told the Post. “We will have to see what happens next, but for any organisations that have ‘deteriorated’ or threatened national security, the Hong Kong government may consider ways to suppress them.”

Lau Siu-kai, a vice-president of semi-official think tank the Chinese Association of Hong Kong and Macau Studies, said: “It is a very serious warning to the Bar, on whether it is willing to separate itself from Harris. If the Bar failed to handle the matter by themselves, Beijing would just see the Bar as a political entity that might threaten national security, just like Harris.

“The Bar now enjoys a lot of privileges, it can self-regulate and also has power over licencing, as the government will consult them over any appointment of barristers. These privileges can also be taken away and further bans might be imposed.”

Executive Council member Ronny Tong Ka-wah, the Bar Association’s chairman from 1999 to 2001, said although he did not support Harris as chief, he also hoped the “patriots ruling Hong Kong” principle would not be applied to the body. 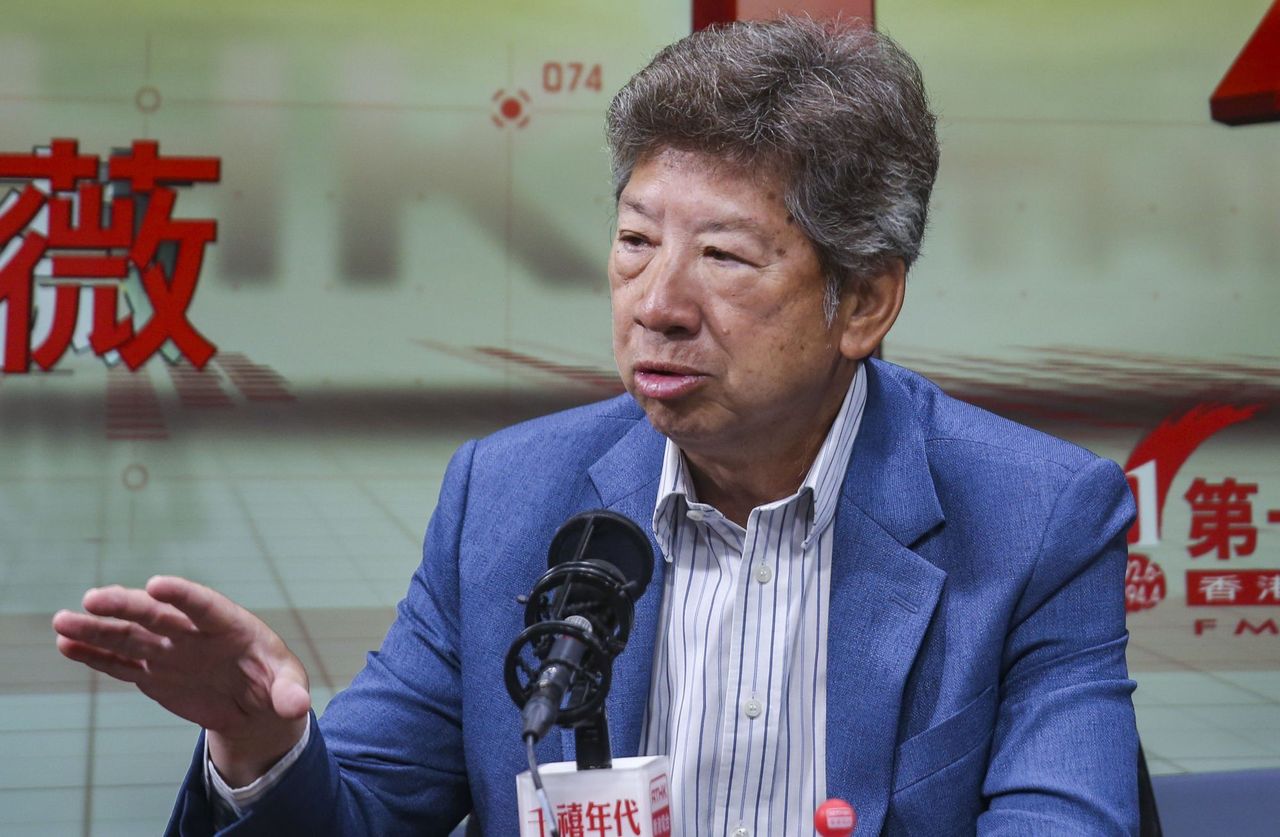 “I agree that Harris is not suitable to work as the chairman, as he has been serving like a politician and always commented on political issues which is not fair to the Bar,” he said. “Yet, as an independent statutory body that upholds the rule of law, the Bar should not have to carry any political background either, thus the ‘patriots’ requirements should not be added to the body.”

As a statutory body, Tong said, the Bar Association had a lot of duties in different government-led committees, such as the influential Judicial Officers Recommendation Commission, which nominates judges.

While noting that he had not read the full statement, Dykes, Harris’ predecessor as Bar Association chief, questioned the logic of the liaison office’s remarks. With the office implying that a foreign barrister such as Harris was not able to maintain the rule of law and uphold the Basic Law, the statement seemed to suggest that no foreign passport holders should be on the Bar and Law Society councils, he said.

“It seems to be at odds with [the Basic Law] which requires the HKSAR government to ‘continue to recognise’ pre-1997 professions and professional organisations,” he said. “Perhaps the liaison office spokesperson could be asked to reconcile the statement with the Basic Law.”

Ahead of the Sunday statement, former chief executive Leung Chun-ying, had also weighed in on Harris, criticising his interview as showing “how out of touch the Bar chairman is with the constitutional and political realities of Hong Kong”.

Earlier, soon after his election as Bar Association chairman, state-run media hit out at Harris, accusing him of having “lost professionalism and rationality” over his remarks suggesting he would seek changes to the national security law.

In February, Hong Kong and Macau Affairs Office head Xia Baolong also stressed: “Key posts under every circumstances must not be taken up by anyone who goes against China and disrupts Hong Kong.”

Xia was referring to posts in the executive, legislative and judicial bodies, as well as appointments to important statutory bodies.

“Those who stand in opposition to patriots are destroyers of the one country, two systems principle and they should not be allowed to take a share of [Hong Kong’s] political power. Not now, not ever,” Xia said.

Xia did not specify the statutory bodies. But in Sunday’s statement, the liaison office said the “patriots governing Hong Kong” principle should also apply to the chairman of the Bar Association because the body had a number of statutory powers.

The Bar Association, founded in 1949, is the professional organisation for barristers in Hong Kong and is registered under the Societies Ordinance.

Its objectives are generally to consider and take proper action on all matters affecting the legal profession and the administration of justice.

The Bar Association also has a seat on the Election Committee, newly empowered with far-reaching influence after a Beijing-imposed revamp of the city’s electoral system.