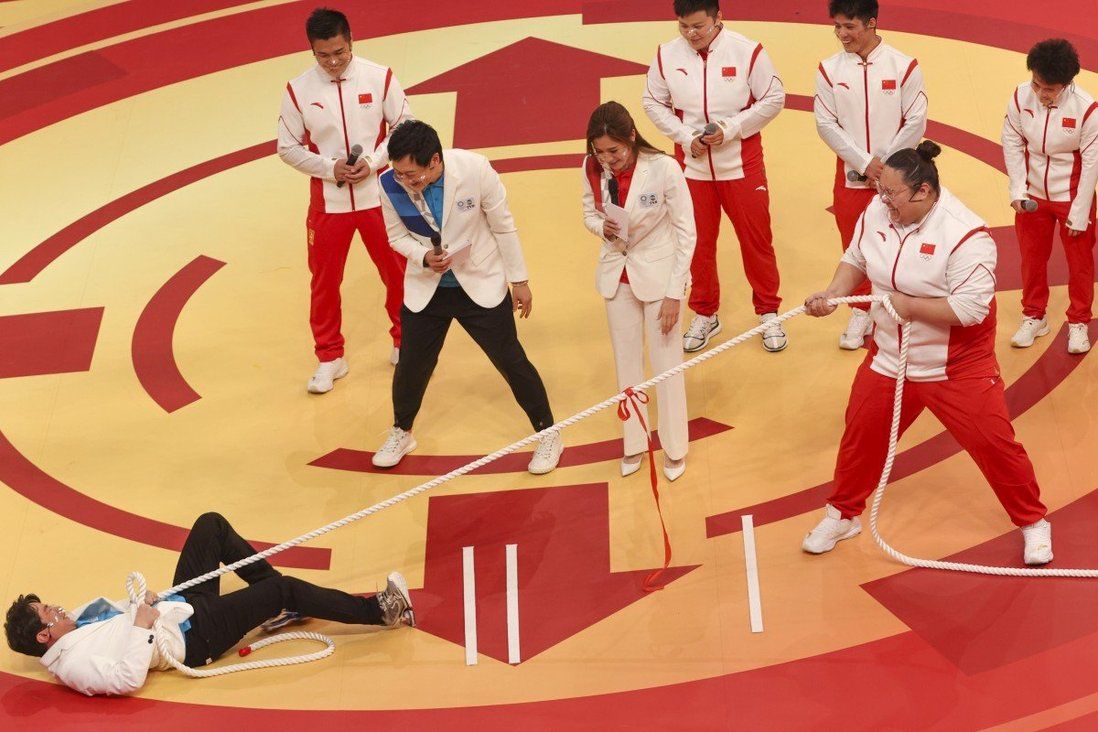 Mainland Chinese Olympians cast aside their normally cool, focused exteriors to have some fun during a variety show that captivated almost 2,000 Hong Kong fans on Saturday evening.

Residents had flocked to Queen Elizabeth Stadium in Wan Chai eager to catch a glimpse of the delegation of 29 mainland athletes on the second day of their visit to the city after their success at the Tokyo Olympics.

During the 1½-hour show, hosted by local celebrities Carol Cheng Yu-ling and Wong Cho-lam, the athletes shared their experiences and took part in a number of lighthearted games, winning loud applause and laughter from the spectators. 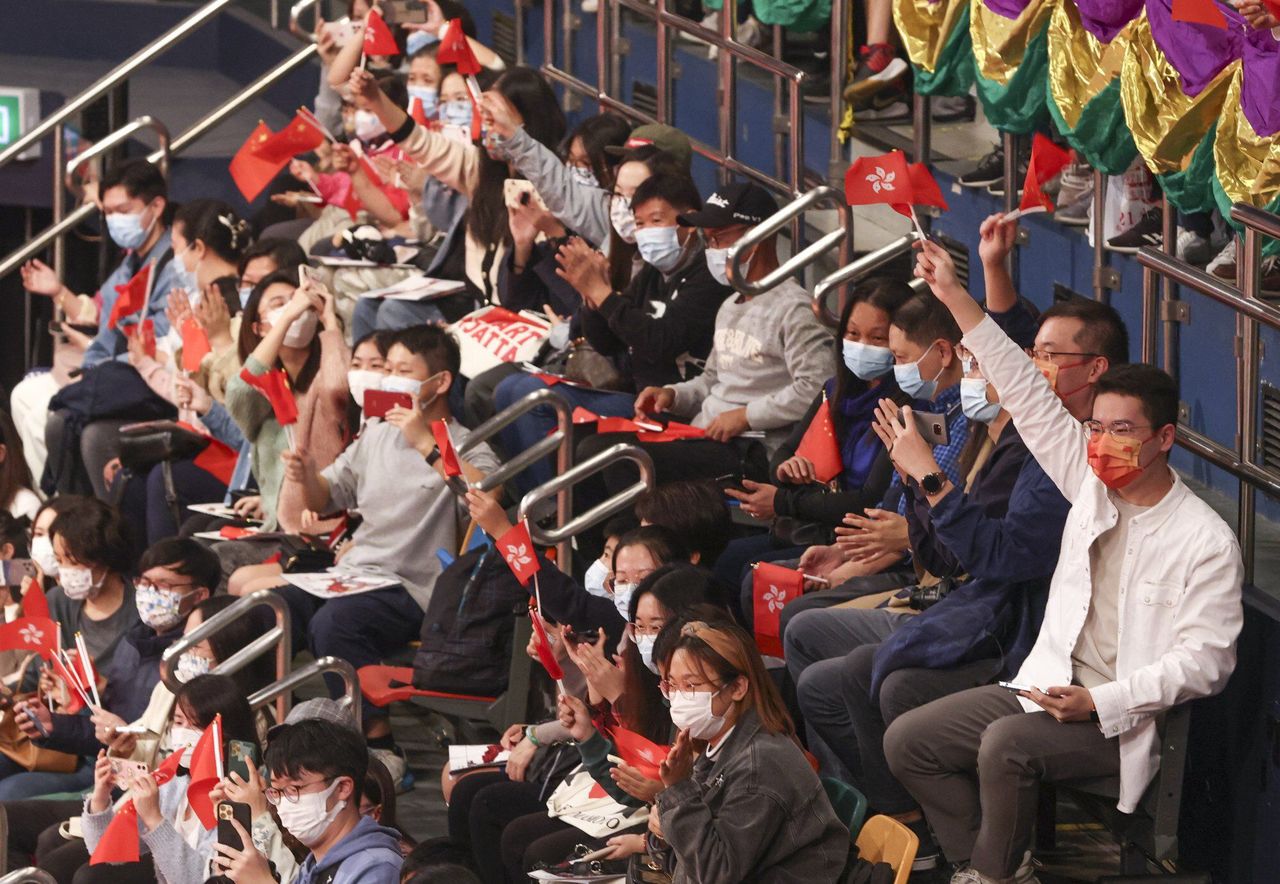 Table tennis legend Ma Long and teammate Xu Xin, a fellow Olympic gold medallist, were first to appear on stage after the athletes had paraded around the stadium. The pair displayed their skills by playing table tennis with three balls at once.

Asked about the advantages of being leader of the national table tennis team, Ma joked: “So I can play and practice with my teammates, and ‘scold’ them.”

Xu told the audience the Wan Chai stadium held a special meaning for him, as he had won the first gold medal of his adult career there.

Fencer Sun Yiwen used her épée to pierce several soft drink cans, while weightlifter Li Wenwen beat show host Wong in a game of tug of war, dragging the actor across the floor.

Women’s sprint cyclist Zhong Tianshi appeared on stage with Hong Kong’s own cycling legend Sarah Lee Wai-sze. Zhong shared her motto with the crowd: “The most captivating thing in life is not the moment you realise your dream, but that you enjoy the whole process.” 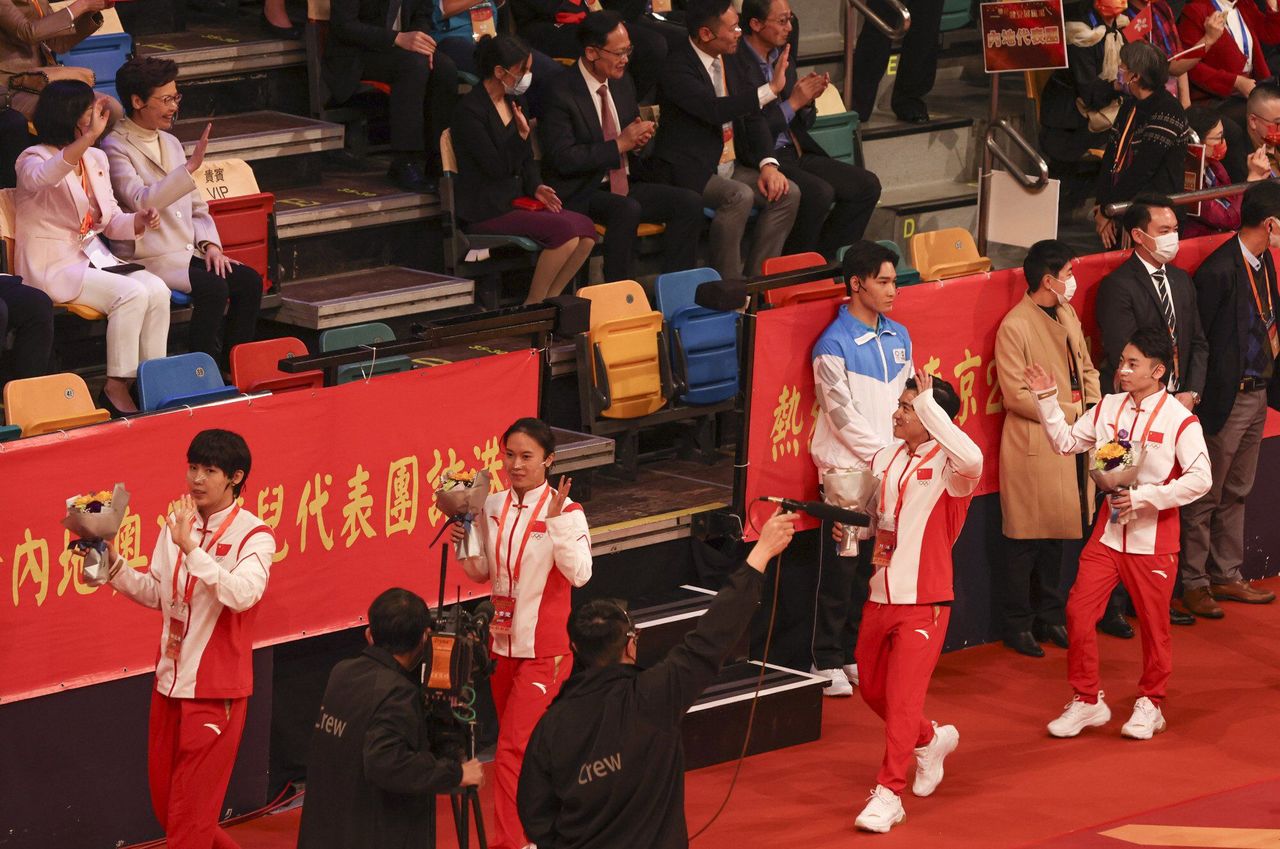 The athletes parade around the stadium.

For many, the highlight of the show came when superstar sprinter Su Bingtian, who is from Guangdong province, greeted the audience in Cantonese.

The sprinter was affectionately named “God Su” after he became the first Chinese runner to reach an Olympics 100m final, setting an Asian record of 9.83 seconds in the semi-finals.

Asked if he accepted his divine nickname, Su said: “I accept it on the track when I have to be godlike.”

Student Crystal Wong, 23, spent the morning applying for a ticket after they were made available online and went to see Su in particular.

“He is the pride of Guangdong,” said Wong, a native of the province. “I feel so excited to see him in the flesh.”

She added: “This is a great opportunity for mutual exchanges between Hong Kong and the mainland, which can strengthen the bond between the two places.”

Retired sports club employee Tang, in her 60s, went with a former colleague to see Ma and Xu. “I came to see our gold medallists, who are our ‘national treasures’. I’m so proud of them,” she said, waving the national and Hong Kong flags. 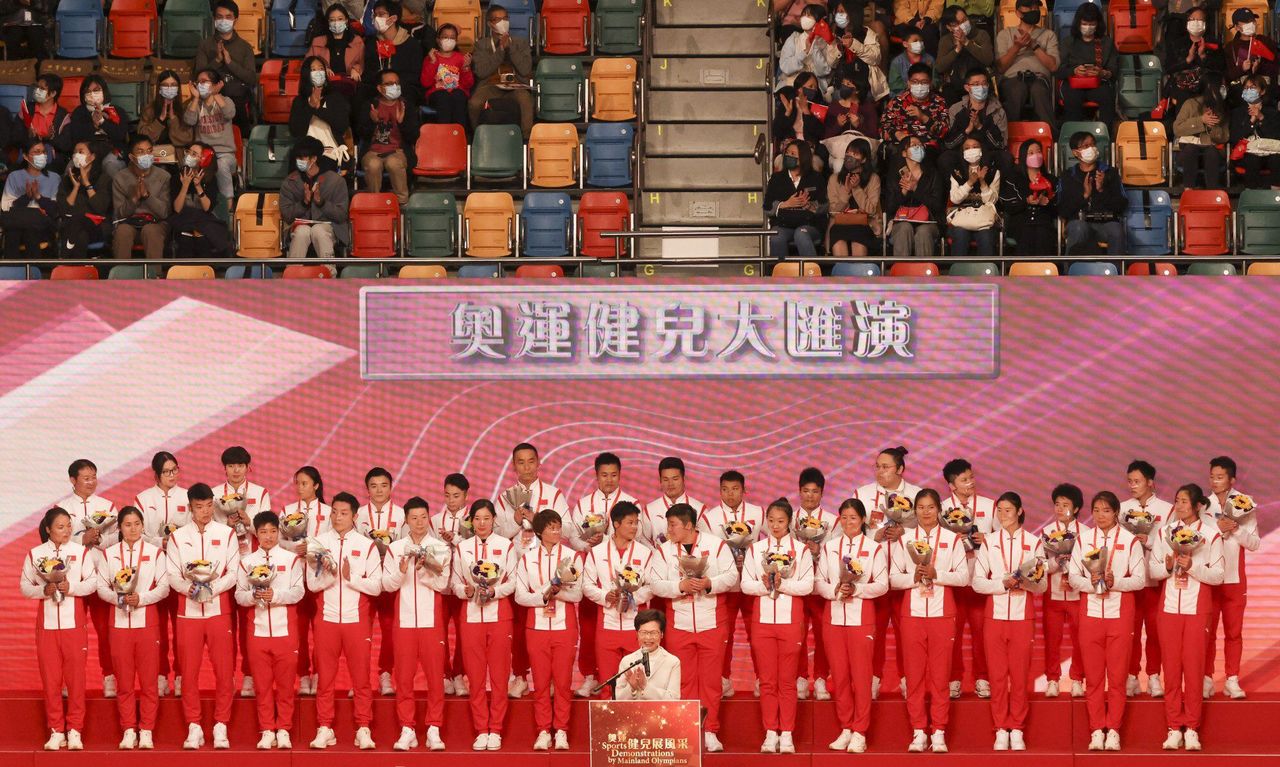 Chief Executive Carrie Lam addresses the audience with the Olympians behind her.

Canto-pop star Hacken Lee Hak-kan brought the show to a close, singing his hit song Red Sun together with the athletes.

Among those watching was Hong Kong Chief Executive Carrie Lam Cheng Yuet-ngor, who sat with Yang Ning, deputy director of the General Administration of Sport of China.

“We hope this variety show will let the public see other aspects of our athletes, who are lively and personable,” the Hong Kong leader said.

On Saturday morning, five athletes from the weightlifting and athletics teams, including Su, put on demonstrations for 500 members from the city’s six disciplined services at the Fire and Ambulance Services Academy.

Secretary for Security Chris Tang Ping-keung urged the watching officers to learn from the perseverance and hard-working attitude of the Olympians, so as to contribute more to the country and Hong Kong.

Olympic gold medallists opened the three-day goodwill tour with a joint demonstration of badminton, fencing, gymnastics and table tennis at Queen Elizabeth Stadium. Others showcased their skills in swimming and diving at Victoria Park Swimming Pool.

The demonstrations attracted about 3,400 spectators, who finally got to watch the athletes in the flesh after months of postponement because of the Covid-19 pandemic.

The delegation of athletes and three coaches from 12 different sports arrived on Friday. On Sunday, Ma, weightlifter Lu Xiaojun and rower Cui Xiaotong will be among those on a visit to Polytechnic University, before the tour ends.