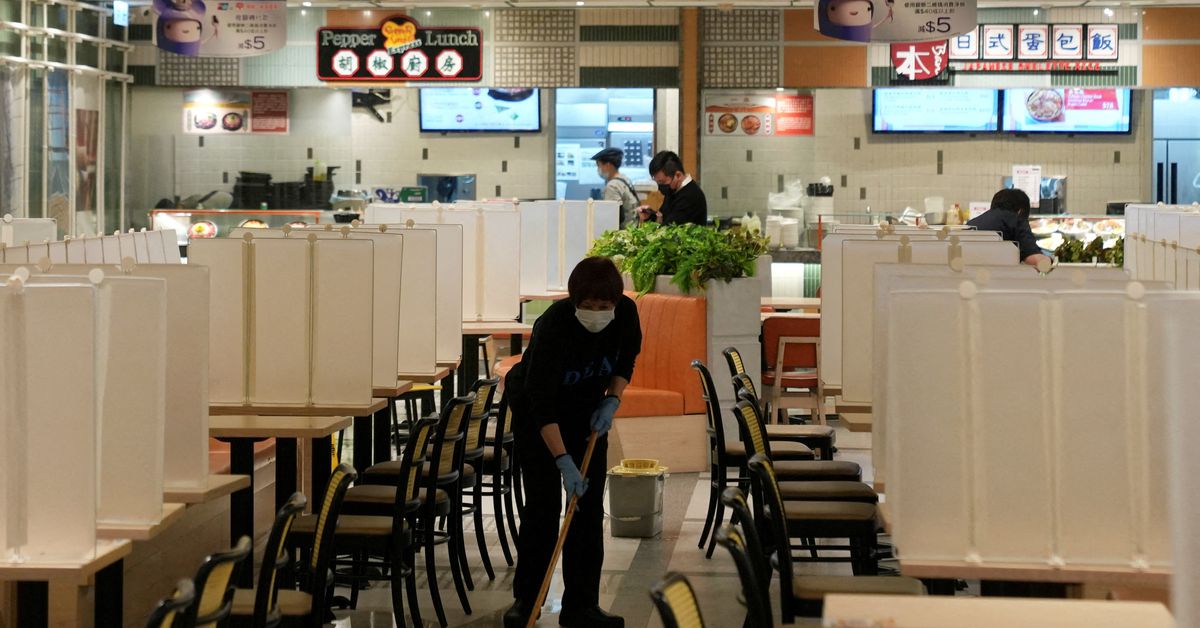 Hong Kong is following mainland China's zero-tolerance approach to control COVID-19, rankling many residents of the international financial hub as much of the world shifts towards living with the coronavirus.

Hong Kong effectively closed its borders and imposed social restrictions this month to deal with a spurt in COVID-19 infections due to the spread of the Omicron variant.

Although the moves are less strict than those in parts of the mainland, they come after months of relative normalcy and are battering a city dependent on business travellers and accustomed to frequent dining out.

Frustration among the city's 7.5 million residents is mounting as the restrictions also threaten to dampen Chinese New Year celebrations at the end of the month, traditionally a time for shopping, feasting and family reunions. The border to the mainland is closed while retailers and restaurant owners are reeling during what is usually the year's busiest period.

"With the obvious conclusion that most countries have come to, that COVID-19 is not going away, the only sensible course of action is to gradually relax the quarantine arrangement and manage this endemic virus in the same way that we manage other viruses," said Stuart Bailey, chairman at the Hong Kong Exhibition & Convention Industry Association, one of the city's world-leading business sectors that has been battered by the pandemic.

Around 50 cases of the Omicron variant have been detected in the community since the first local transmission was recorded in late December, ending three months without locally transmitted infections.

Authorities have raced to contain further spread, with leader Carrie Lam vowing to persevere with zero tolerance of infections while asking society to tolerate the costs.

"I fully understand the anxiety, dissatisfaction, and anger of the public," Lam said this week. "There is nothing we can do because we need to fight this epidemic."

The government re-imposed a raft of restrictions on Jan. 7, including bans on gatherings of more than four people and dining out past 6 p.m.. Pubs, schools, gyms and cinemas have been ordered to close and air travel has been sharply cut back.

In mainland China, a handful of cities have imposed lockdowns on millions of residents, preventing them from leaving home as authorities re-double containment efforts as Beijing readies to host the Winter Olympics.

Lam's policies have long exasperated those unable to travel for business or family emergencies due to costly 21-day hotel quarantine, flight bans, and difficult paperwork.

The city's position as one of the world's busiest passenger hubs has been drastically curtailed by tough air crew restrictions and the banning of passenger flights from countries including the United States, Australia, France and Britain.

Hong Kong is far behind other developed cities with its vaccination campaign. Around 75% of eligible people have had a first dose, while around 70% have had a second one. About 8% have received a third.

Almost a million people have been given mandatory testing notices so far this year, thousands have been forced into overnight lockdowns, and thousands more have been sent to government quarantine facilities.

The largest quarantine facility has been beset with electricity and supply shortages, overwhelmed by sheer numbers.

Worse may be still to come.

Lam told legislators on Wednesday she expected some goods to be unavailable or their price to go up, with food, electronics and medicine among the worst affected. read more

Bars, restaurants and caterers have forecast hundreds of millions of dollars in losses in coming weeks, while some gyms, beauty parlours and cultural establishments fear for their survival.

"We are feeling very helpless and frustrated," Hong Kong’s Theatre Association said in an email.

The frustration was compounded last week when senior government officials were found to have ignored appeals to avoid large gatherings and attended a birthday bash.

Lam ordered a "disciplinary investigation," although many residents - weary from two years of COVID-19 that came on top of dramatic political change as Beijing tightened its grip on the city - wondered if rules applied only to ordinary folk.

A manager at Sun Kong restaurant, which serves dim sum in a working-class neighbourhood, pointed to his mostly empty venue, saying it was not his fault.

"Carrie Lam is the one not managing well," said the manager, who only gave his last name of Chan.