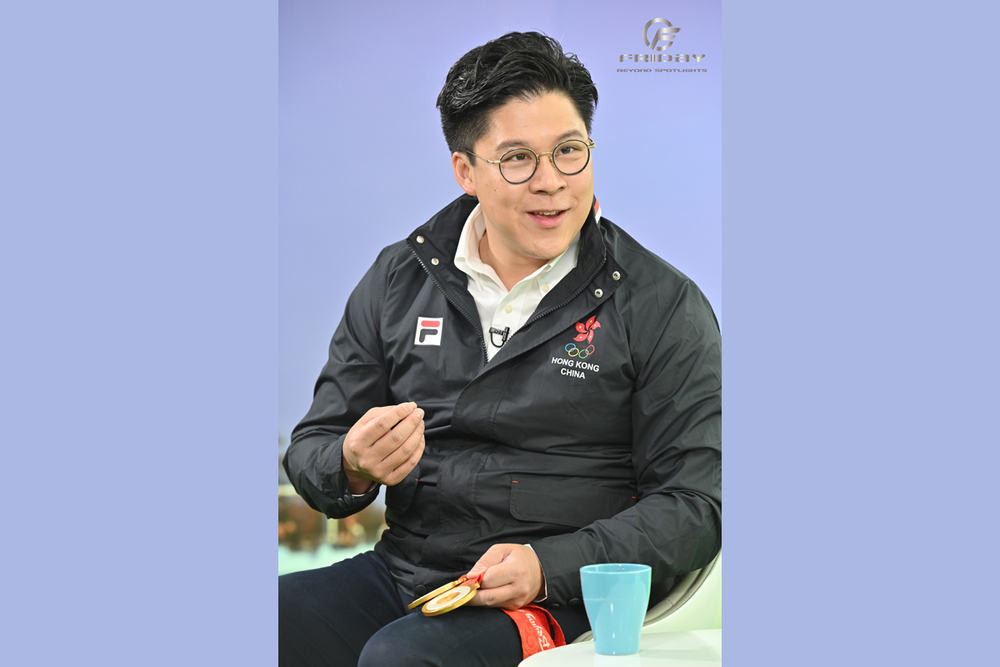 Friday Beyond Spotlights is an informative yet light-hearted talk show airing every Friday at 8:30pm on Hong Kong International Business Channel (#76). The English language program features prominent guests who share their insights into current affairs, business, innovation and culture, as well as their ingenuity, passion and grit which forge their Lion Rock spirit. The show is hosted by businessman and philanthropist Patrick Tsang On-yip, lawyer and lawmaker Nick Chan Hiu-fung and seasoned business maverick Herman Hu Shao-ming.
Hosted by Herman Hu, the third episode of Season 2 spotlights Kenneth Fok Kai-kong, member of the Legislative Council of Hong Kong SAR representing the sports, performing arts, culture and publication functional constituency; and Vice President of the Sports Federation and Olympic Committee of Hong Kong, China.
Hong Kong will see the opening of the Kai Tak Sports Park, featuring a 50,000-seat main stadium with retractable roof and removable turf near the waterfront. Due for completion in 2024, this world-class sports facility will enable Hong Kong to host more international sports events, and also the opportunity to reach out to the Greater Bay Area.

According to Fok, the Kai Tak Sports Park should not just be a Hong Kong feature, but the newest stadium in the Greater Bay Area as this can immediately extend Hong Kong’s reach from 7 million to 70 million people, which is a sound business proposal for a lot of international sports federations, and a lot of international sporting agencies will put their eyes on Hong Kong. “How can Kai Tak connect with different stadiums within the Greater Bay Area? We have a lot of good stadiums in Shenzhen and Guangzhou. Can we come together and bid for some big events so they can have a tour? So when the sports teams come, when Premier League teams come, they are not just coming to one market. They’re going to a big market,” he suggested. “I can envision the future where Hong Kong can bridge the world, and get more hosting opportunities, different sporting events, conventions and trade shows as we reach out to the Greater Bay Area, even the Greater China market.”

At the interview, Fok displayed the two Olympic Gold Medals that his wife, Guo Jingjing, won at the 2008 Beijing Olympics as the items that personify his Lion Rock spirit. Married to Fok in 2012, Guo is known as China’s “diving queen” who won a total of four Olympic Gold Medals, two from Athens in 2004 and two from Beijing in 2008.

“I thought a lot about it. For myself, family is very important; and to a certain extent, my family, especially my wife, has shaped who I am today. We’ve been together for many years, so I brought something very special as she’s an athlete,” Fok said, “Why I brought them here today? It’s not about the medals themselves. Many people only see the moment when the athletes get presented the medals or cross the finishing line, but not the moments that they sweat, they bleed, and they crash; and the moment they are in despair and want to give up. We should see a deeper story of these medals.”

Fok said it’s also a responsibility for our society and people to understand the Lion Rock spirit behind getting these medals. “For us, especially in sports, it’s a good reminder of what we need to do and how we need to encourage our athletes, not just, by looking at how many medals they get, but make sure their spirit, their stories can be told.”

Fok said in Hong Kong many aspiring young athletes face a choice between their sports and studies, but he has seen successful athletes who are able to do both well at the same time. “This takes dedication of work. They get up very early, they study, they train very hard, they have the breakthrough and they get the best of both worlds. So if you’re serious and passionate about sports, keep at it. Keep the fire burning. I’m sure that Hong Kong could support you to become a professional athlete and have the chance to represent Hong Kong.”

He also shared a personal story of how he teaches his three kids about the meaning of sports. “In terms of the participation, our kids are good swimmers. So we try to train them. We try to, but not with any aim, not with the aim that ‘you need to be an elite athlete’. It trains their will and spirit as well. I enrolled my son into a fencing competition, and the first few times he lost and was very upset and crying. He always wants to do the best. But through these experiences, we, as parents, have to tell them: ‘See, mum, she doesn’t always win. She lost countless times before reaching the top’. We tell them these stories and they would feel what it means to compete, to win and to lose. These are things that take time to learn.”