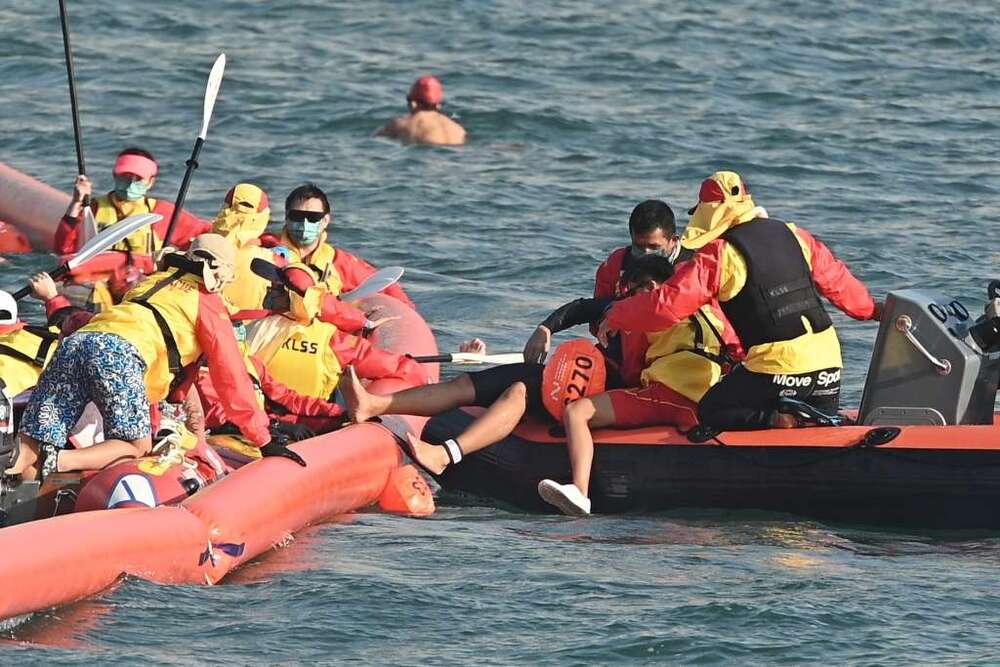 Four swimmers were sent to hospital during the New World Harbour Race on Sunday, with the low water temperatures to blame.
David Chiu Chin-hung, chairman of the organizing committee, said 1,200 swimmers took the plunge and embarked on a new route for the cross-harbor swimming race on Sunday, among whom about 160 people failed to complete the race within the time limit.

The race returned to the city after it was suspended for two years – due to the 2019 social unrest and the subsequent Covid-19 pandemic. This year also marked the 10th anniversary of the annual swim race since it was revived in 2011.

Chiu said that the water temperature was only about 20 degrees in the morning, 8 degrees lower than the usual temperature in a swimming pool. As some swimmers are used to swimming inside pools, the low temperature could have made them feel unwell.

"In addition, this year's race was also marred by waves and tidal streams as the wind speed reached 8 or 10 kilometers per hour in the morning," Chiu said.

Canoes and motorboats stood by during the race to ensure the safety of the swimmers. Some participants who felt unwell boarded the lifeboat, while some were assisted by lifeguards to go ashore.

Chiu also said that no political slogans were observed during the race and the process of ensuring participants use the LeaveHomeSafe app was smooth. Fewer than 10 participants were turned away for failing to provide valid vaccination proof.

He added that the organizer will review the event afterwards, with the goal of attracting 3,000 to 4,000 participants when it is held again in the future.

In the race this morning, Keith Sin Chin-ting was crowned the male winner, finishing at 13:44.2. This was also Sin’s fifth time winning in the swimming race.

Nip Tsz-yin, an open water swimmer for the Hong Kong team who has participated in the cross-harbor race three times, was named the female winner, clocking at 14:56.0.

The physically demanding sports event has a long history in this city. The cross harbor race was held annually from 1906 to 1978.

The yearly event was revived again in 2011 and renamed the "New World Harbour Race," providing a 1.8 km racecourse for over 900 swimmers.

At the age of 79, Mabel Leung Yuen-ying was the oldest participant in this year's race. She swam with her daughter in a leisure race. She said her father also joined the race back in the days, and she hoped to pass the baton to her daughter.
#COVID-19  #Covid
Add Comment