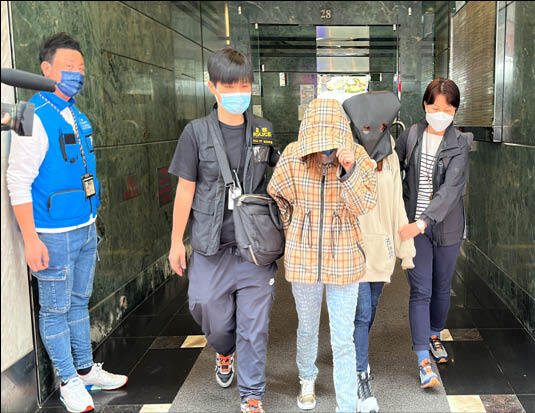 Four people from a Jordan beauty parlor have been arrested over the botox poisoning of three women.
One of those arrested was a doctor, Tai Kong-shing, who was nabbed in September on suspicion of issuing fake Covid vaccination waiver certificates.

A man and three women were arrested yesterday, police said, for offering, assisting with and conspiring in unlicensed medical services at their homes in Tseung Kwan O, Yau Ma Tei and Tsuen Wan.

Sources said the four were Cheung Man, 43, and Wong Yin-ha, 35, who are directors of CC Beauty, which is linked to the poisoning; businesswoman Chow Kwai-wah, 40, and Tai.

A Yau Tsim crime unit took them back to the beauty center at Hang Bong Commercial Centre yesterday.

They stayed at the parlor for two hours and left with evidence, which included vials and bottles of medicine.

On September 23, Tai, 76, appeared in court charged with three counts of access to computer with criminal or dishonest intent that alleged he used the eHealth system at his Yau Ma Tei clinic between June 1 and September 20. Tai was released on HK$100,000 cash bail and banned from leaving the SAR.

It is understood Tai's case involved around HK$12 million from some 3,000 patients.

The Centre for Health Protection called on people who have received botox injections at CC Beauty to contact the health department as soon as possible.

"Persons who experience symptoms of neurological system impairment such as drooping eyelids, double vision or blurred vision, problems with chewing, hoarseness, difficulties in swallowing, speaking or breathing after receiving injections at the above premises, should call the hotline immediately," a center spokesman said.

He said the symptoms, caused by weakened muscles and the spread of botox toxin beyond the injection area, can see patients suffer such symptoms for hours, days or even weeks after the injection.
#Covid
Add Comment