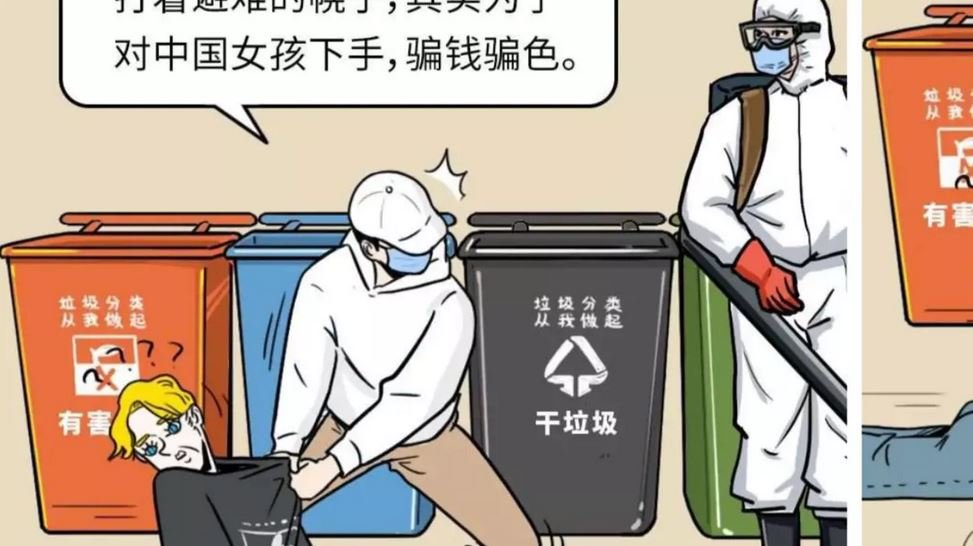 A comic attacking foreigners who don’t comply with Chinese rules of hygiene to check the coronavirus circulated briefly on Chinese social media. “Illustrations of the foreign trash classification,” a comic posted on Chinese social media site Weibo, attacking foreigners who refuse to wear face masks. The man who holds the foreigner says "came to China to avoid trouble (ie the coronavirus), but then went after the girls, cheating them out of money and into sex"

A comic attacking foreigners who don’t comply with Chinese rules of hygiene to check the coronavirus circulated briefly on Chinese social media. The comic comes at the time that China assists countries hit by the Covid-19 virus with mouth caps, ventilators and medical assistance.

“What’s up, brother?” asks the sanitary worker in the hazmat suit. “He came to China to get out of trouble” says the other man. He wears a face mask and drags a blond man over the street. “Hè dòesn’t wear a face mask, and attacked a health worker, ungrateful, bites the hand that feeds him, consider him organic trash,” says hazmat, after which he throws the foreigner in the green bin meant for biological waste.

The scene is part of a 59 page comic titled “Illustrations of foreign trash,”put online by ‘Amur Karp Youth (Jin Li Qingnian),’ the Weibo (China’s Twitter) handle of a user who identifies himself as a “male, born in 1993.” He studied at Beijing’s prestigious Qinghua University. Current location: Qingdao, Shandong province. Likes to post comics on a regular basis.

In another scene, another man is thrown in the bin. “If you don’t want to wear your mouth cap, f*** off to your own country,” screams the sanitary worker, after which he sprays the contents of a liquid over him, drowning him in the trashcan.

Other “foreign trash” “came to China to avoid trouble (ie the coronavirus), but then went after the girls, cheating them out of money and into sex.” A third, a colored man this time, “lives in China for a long time, he says that China is ok, but on the internet he secretly paints China black.” After all the trash cans are filled with foreigners, the sanitary worker kicks them away, “Foreigner, ***k off!" he screams.

A postscript explains that “we don’t discriminate against anybody, but we don’t pamper foreigners either! If you come to China to avoid trouble, then you stick to China’s rules!” but stressed that “peaceful and friendly foreigners are warmly welcome!”

In the beginning of April, tensions have flared between police and Africans in the southern city of Guangzhou after local officials announced a cluster of Covid-19 cases in a neighbourhood with a large migrant population.

Many complained they had become targets of suspicion and subjected to forced evictions, arbitrary quarantines and mass coronavirus testing.

The African Union expressed its "extreme concern" about the situation calling on Beijing to take immediate corrective measures. In a reaction Beijing said it “rejects all “racist and discriminatory remarks.”