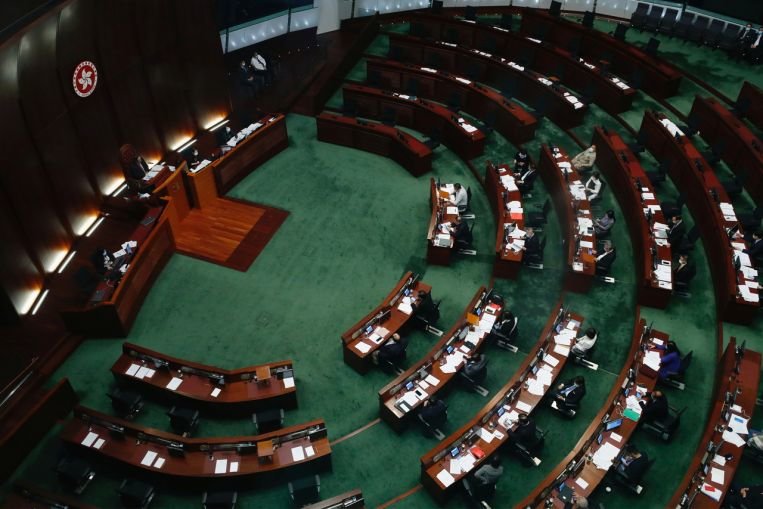 Foreign forces meddling in Hong Kong affairs are "doomed to failure," said the Chinese Foreign Ministry, condemning the Five Eyes Alliance's announcement stigmatizing China's top legislature's decision to disqualify four unpatriotic Hong Kong lawmakers, and urged the countries to stop their double standards.
On Wednesday, the Five Eyes intelligence sharing group issued a statement, accusing the Standing Committee of China's National People's Congress' disqualification of members of the Hong Kong Legislative Council (LegCo) of being "part of a campaign to silence critics," and called on Beijing to reinstate them.

"We urge the Chinese central authorities to reconsider their actions against Hong Kong's elected legislature and immediately reinstate the LegCo members," foreign ministers from Australia, the UK, Canada, New Zealand and the US said in the statement.

Rebutting such ungrounded slander and blatant interference in China's internal affairs, the spokesman from the Office of the Commissioner of the Ministry of Foreign Affairs in the Hong Kong Special Administrative Region pointed out that the decision of the NPC Standing Committee was based on the necessity of the "One Country, Two Systems" formula.

"It is a universal political practice to adopt legislation that establishes an oath of allegiance, defines the qualifications of parliamentarians and ensures the national identity and political loyalty of parliamentarians," the spokesperson said. "What country in the world would allow people who collude with foreign powers, subvert regimes, or advocate secessionism to serve as public officials?"

The spokesperson noted it is a basic political ethic in every country for public officials, especially legislators, to uphold their country's constitutional laws and to pledge allegiance to their country.

The spokesperson emphasized that the Sino-British Joint Declaration is essentially about China's resumption of its exercise of sovereignty over Hong Kong and arrangements for the transitional period.

"No single word or clause in the document, which has altogether eight paragraphs and three annexes, grants the UK any responsibility to Hong Kong after the city's return, still less any right to meddle with Hong Kong affairs. The UK has no sovereignty, jurisdiction or the right to supervise Hong Kong, and likewise other countries are in no position to make unwarranted comments about Hong Kong affairs on the pretext of the Joint Declaration."

No one is more sincere and determined than the Chinese government to implement the "One Country, Two Systems" formula fully and accurately, or is more concerned about the prosperity and stability of Hong Kong and the well-being of Hong Kong, the spokesperson said.

The NPC Standing Commiteee adopted a decision on Nov 11 that four members of the LegCo - Alvin Yeung Ngok-kiu, Kwok Ka-ki, Dennis Kwok Wing-hang and Kenneth Leung Kai-cheong - who have notorious records for creating trouble and are deemed unfit for their LegCo duties, were disqualified from the local legislature in Hong Kong with immediate effect.

No country tolerates public servants who do not recognize their national identity or do not sincerely swear allegiance to the state in assuming office and carrying out their duties, said Chinese FM spokesperson Wang Wenbin at a press conference last week.

Wang noted that Hong Kong is a special administrative region of China, and "the issue of the eligibility of members of the Hong Kong LegCo is purely an internal affair of China. Other countries have no right to comment on it or interfere in it."
Add Comment