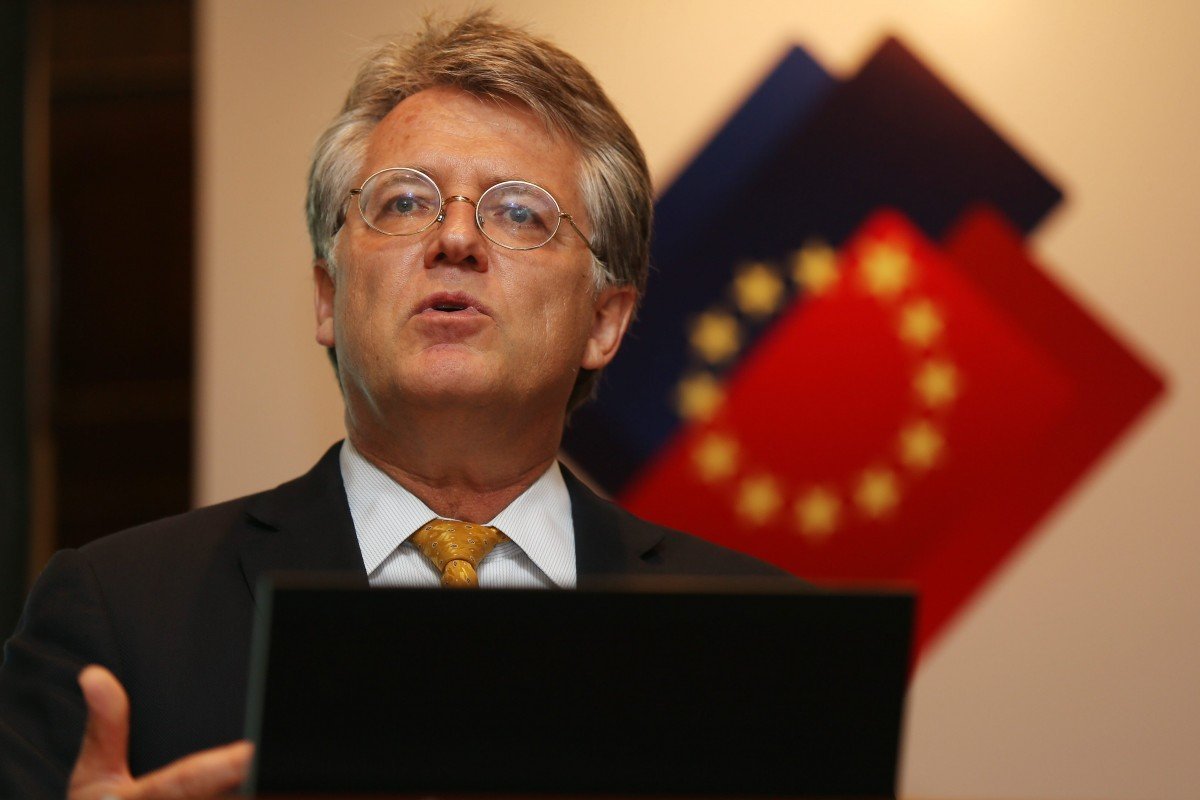 Hong Kong’s status as Asian metropolis and a financial centre is attractive to overseas investors and should be maintained, says chamber of commerce president. China may be unharmed by US trade impact on Hong Kong ‘but innovation may suffer’

Foreign companies may “vote with their feet” to leave Hong Kong if the city’s autonomy is jeopardised but they would remain in mainland China, a European business leader said.

Joerg Wuttke, president of the European Union Chamber of Commerce in China, said Hong Kong’s autonomy, which is being challenged by upcoming national security legislation and the fallout of a power play between China and the United States, was a factor in foreign investment.

He said Hong Kong’s uniqueness as an Asian metropolis and an international financial hub should be maintained.
China’s legislative body passed a resolution last Thursday to draft a tailor-made national security law for Hong Kong, triggering an international outcry that such a move may erode the autonomy of the city and exacerbate already bitter tensions between Beijing and Washington.

US President Donald Trump threatened that the US would retaliate and the administration has started to eliminate special treatment for Hong Kong. Such benefits include Hong Kong enjoying different and lower tariffs as a separate customs area to mainland China.

Beijing hit back, condemning US interference in China’s sovereignty and pledging to respond with countermeasures. It defended its position to impose the legislation to safeguard the stability of Hong Kong which has been torn by unrest since last year.

“If the situation gets worse, if the certainty of independence of the judicial system, freedom of expression, assembly and movement of goods, has been challenged, then of course investors will vote with their feet. We will move out,” Wuttke said on Tuesday. “At this stage we are not, yet.”

Foreign ministers of European Union countries expressed “grave concern” about the draft decision on Friday and discussed the need to revisit EU-China relations. EU foreign policy chief Josep Borrell said the EU would continue discussing and reaching out to Beijing.

Wuttke also said the US lifting its special provisions for Hong Kong would have an “insignificant” economic impact on China because Hong Kong was a small part of China’s entire economy.

“The economic impact for China of Europeans’ pull-out [of Hong Kong] would be minor, but I guess where it hurts China is in tech gains and innovation,” Wuttke said.

He said foreign companies would continue to invest in mainland China because of its massive market potential.

China unveiled a master plan on Monday night to develop the tropical island of Hainan, a province close to Hong Kong and sometimes described as the country’s Hawaii, into a free-trade port. The announcement fuelled speculation about whether it was a step to replace Hong Kong.

“Hong Kong is not just any ordinary city. It has a distinctive system as explicitly pointed out by ‘one country, two systems’ based on the agreements that seemed to be challenged because of the security law from Beijing.

“Hong Kong stands for rule of law, independent judiciary system, fundamental rights, freedoms of speech, press and assembly, that’s all what we cherish. In the city there is an incredible cluster of professionals, particularly in finance. We hope this can be maintained,” he said.