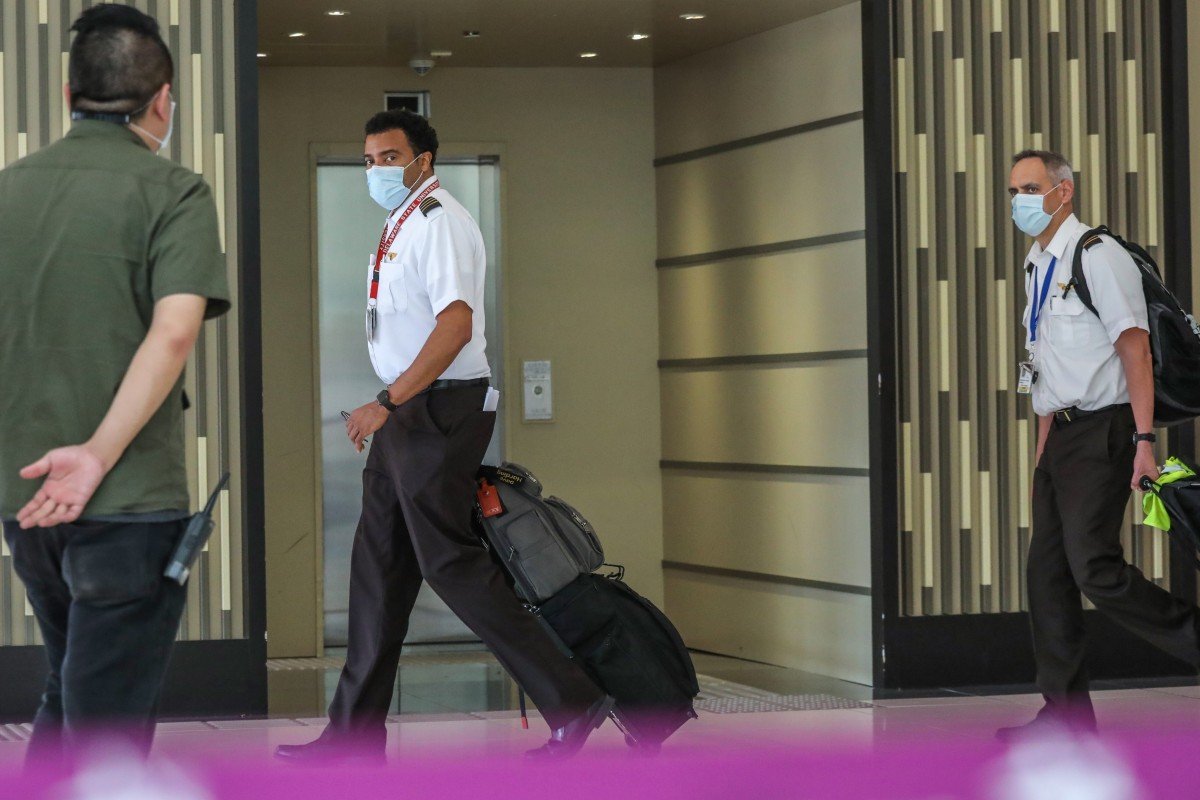 United Airlines and American Airlines cancel recently resumed services to city. Pilot unions concerned positive test could throw flight operations into chaos
Foreign pilots and cabin crew are refusing to fly to Hong Kong over fears of testing positive for Covid-19, as United Airlines and American Airlines (AA) became the first carriers to suspend flights to the city on Thursday over new mandatory-testing rules for aircrew.

The first batch of results from mandatory aircrew tests uncovered four cases, including three locally-based pilots working for Hong Kong Air Cargo, a unit of Hong Kong Airlines, who had just returned from Almaty in Kazakhstan.

The Centre for Health Protection classified the cases as imported.

A coalition of European and North American carriers has proposed testing aircrew before they depart for Hong Kong, according to those familiar with the talks.

Airlines are concerned all crews could be quarantined for 14 days if one person tested positive, something flight staff find unacceptable.

Companies also feared subsequent quarantine would throw flight operations into chaos and were willing to cancel flights and give up precious revenue to resolve the issue, sources added.

The sudden cancellation of the relaunched United and AA services stems from concerns raised by both companies’ pilots unions over the testing. American, which was expected to resume passenger flights to Hong Kong this week, has suspended services until August 5.

Over the past three days, 80 people have been confirmed as infected with Covid-19 in Hong Kong. Of those, most involved local cases, and some patients had no travel history and no identifiable source of infection.

The cases have sparked fears a third wave of the virus has hit the city, and prompted health chiefs to introduce stricter measures to combat rising concerns of a community outbreak.

A United Airlines spokesman said: “UA877 was cancelled due to recent changes in testing protocol at HKG. United flights to and from HKG are suspended through July 10 (westbound).

“We are currently assessing how this impacts our future operations.”

UA877 was scheduled to depart San Francisco for Hong Kong on July 8. HKG is the airport code reference for Hong Kong International Airport.

“We’ve been making regular adjustments to our schedule to match demand, and we consider a range of factors including travel restrictions or entry requirements in making network decisions,” an AA spokesman said.

According to sources, the counterproposal from airlines is seen as a workaround, and involves testing aircrew on departure to weed out positive cases before they arrive in Hong Kong.

“Covid-19 testing before departure can be carried out at short notice if required,” the source said, stressing the need to take precautions.

On Tuesday, the Centre for Health Protection announced that all air and shipping crew members arriving in the city must provide deep-throat saliva samples for coronavirus testing.

The stricter measures for people exempted from quarantine were imposed after some pilots were among those found to be infected with Covid-19.

Pilots are now required to go to the nearby AsiaWorld-Expo to get tested, although unlike the general public, aircrew do not have to wait for their results, and are free to leave the testing centre.

KLM cancelled its Amsterdam-Hong Kong flight on Wednesday, resulting in a knock-on effect to the return flight. According to the Dutch national carrier’s website, the return flight on Friday would be routed via Bangkok. An airport source said the carrier was making the arrangement to ensure their crews did not have to stay overnight in Hong Kong and get tested.

British Airways said it would “comply” with the testing process and all other measures implemented by local authorities.

Lufthansa Group said it had no comments on the new arrangements, while Air France-KLM was also contacted for a response.
United’s swift cancellation of all flights marks a big U-turn for one of the top US airlines. Only last week, it formally announced the resumption of flights to Hong Kong from San Francisco and Singapore. The first flight was on Wednesday.

Separately, United announced on Wednesday it could lay-off around 36,000 staff, or two-fifths of its workforce, as soon as financial aid from the United States government expires.
#COVID  #COVID-19
Add Comment