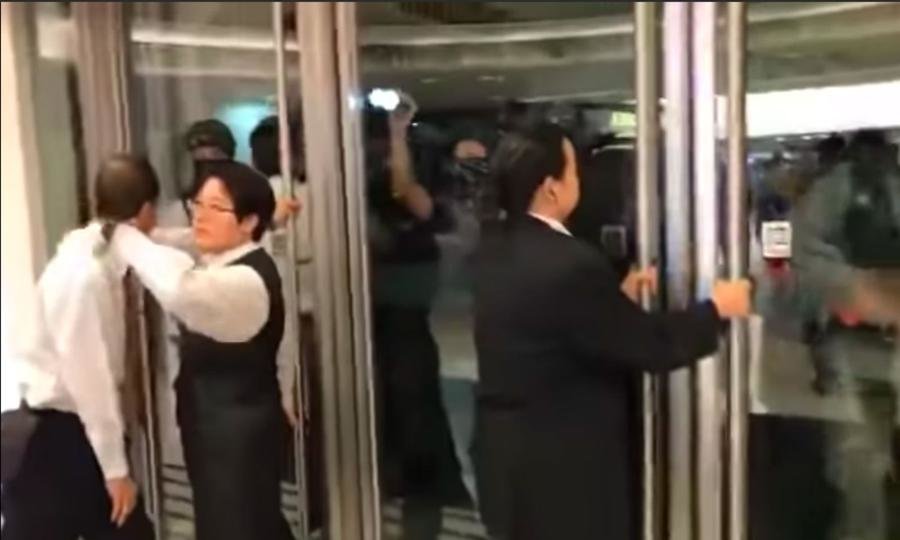 Five staff members of a Hong Kong shopping mall were arrested on Wednesday for allegedly obstructing police from doing their duty as the staff tried to stop officers from entering a mall in Ma On Shan in the New Territories.

Three men and two women – aged between 28 and 62 – were arrested on Wednesday for obstructing police in carrying out their duties at MOSTown on Monday. Four are security guards and one is a customer service officer.

They were released on bail on Wednesday night as fresh protests started in the mall.

The arrests were made after the guards tried to stop a group of riot police from entering the mall on Monday night, while a group of Ma On Shan residents gathered inside to sing songs and chant slogans against the new anti-mask law.

Video footage shows police attempting to enter the mall via a footbridge, with security guards refusing to open the bridge’s glass doors.

The riot police pushed in. Video showed one of the guards being hit with a baton, while another guard opened his arms in an attempt to stop the police. Police pushed down a journalist who was doing a live-stream news report and subdued another man on the floor.

The police force said on Tuesday that officers were at the mall to deal with a report of vandalism to one of the shops as well as at nearby Ma On Shan MTR Station. They said officers needed to enter the mall to go to the station.

Police reiterated that officers can enter any premises or place if they reasonably believe the person they want to arrest is inside the premises, and they can do it without a warrant.

Alvin Yeung Ngok-kiu, a Civic Party lawmaker and barrister, said police should have a specific target for an arrest before entering private premises. “They are not allowed to enter into private premises to simply do any investigations,” he said.

The Labour Party criticized police for targeting security guards and arresting people who were trying to do their jobs. “They attempted to scare guards of other shopping malls and housing estates into allowing them to go into private premises for unreasonable arrests,” the party stated.

Barrister Albert Luk Wai-hung said police do not have the right to enter private property without the owner’s permission or a search warrant unless officers have an overwhelming reason, the Sing Tao Daily reported.

“Even if there is an overwhelming reason, officers should tell guards of their intention or they will never know why they have to enter the building,” he said.

The Hong Kong Association of Property Management Companies sent a reminder to its members following a police meeting in August after the entry of officers into Amoy Plaza sparked a controversy.

The association quoted the Police Force Ordinance, saying an officer should be allowed into premises if he has reason to believe any person to be arrested has entered it. If a warrant cannot be obtained in time, police can break open any door to prevent a target from escaping.

But the labor union, HK Building Management and Security Workers General Union issued a statement, saying the police force had abused their power and tried to intimidate security guards at other private premises into letting officers in whenever they wished.

Several hundred people gathered at the mall on Wednesday evening after an online appeal, to demand the immediate release of the arrested guards. They shouted slogans, calling for the police force to be disbanded and accusing officers of abusing their power.

A group of officers emerged from the station at one point to try to disperse the protesters, but did not use force or make any arrests. The shops at MOSTown closed early at 7pm.

Henderson Land, which owns the mall, said the incident on Monday night was “regrettable,” but offered no further comment, citing the possibility of pending legal proceedings.

The shopping center will remain closed this weekend to “prevent conflicts.”

Meanwhile, the police force clarified on Facebook an online rumor alleging a male officer entered a delivery room in a hospital to guard a pregnant woman who had been arrested.

It was understood the pregnant woman, 19, did not carry any protective gear when she was arrested in Tuen Mun on Monday, Apple Daily reported. Feeling unwell after her arrest, the woman was sent to Tuen Mun Hospital and guarded by a male and female police officer.

A woman who stayed in the same antenatal room told the newspaper that two officers stayed in the corridor, but then were replaced by two male officers, leading to complaints from other female patients in the ward and medical staff. Two female officers later replaced their male colleagues.

The force confirmed on Wednesday that they arrested a pregnant woman for alleged unlawful assembly and criminal damage in Tuen Mun.

But they said the officers stayed outside the hospital room. They also deployed female officers after other patients’ concerns about the presence of the male officer.