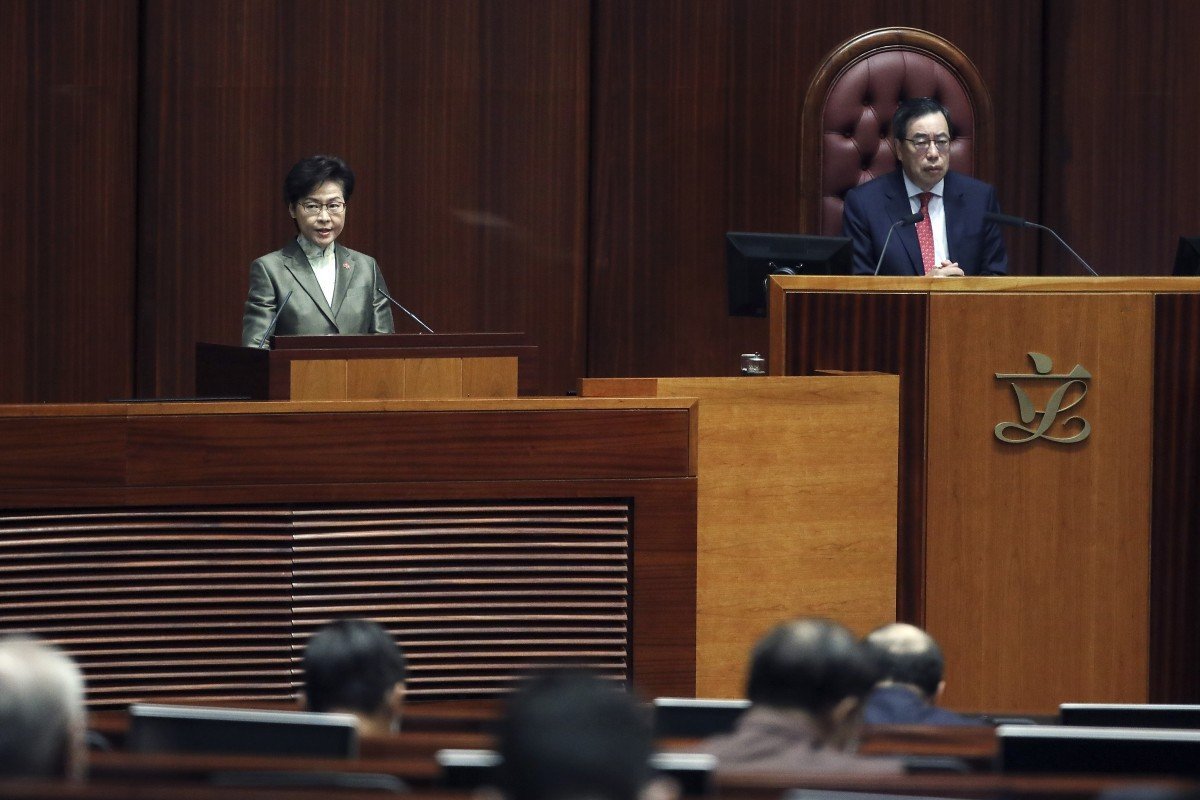 Greater Bay Area integration and the city’s constitutional order featured heavily in the speech, as did a ‘zero infection’ target for the ongoing pandemic.

Over some two hours and 15 minutes, Lam drove home what she characterised as the need to save Hong Kong’s constitutional order from “chaos”, while also laying out a long list of economic and social measures – more typical fodder for a policy address – that will rely heavily on the assistance and coordination of Beijing if they are to help the city pull out of the economic downturn triggered by the Covid-19 pandemic.

Here are the five key takeaways from Tuesday’s speech.

While peace had been “restored” in Hong Kong since the imposition of the Beijing-drafted national security law on June 30, she added, efforts should be made to ensure national security was “comprehensively” protected. 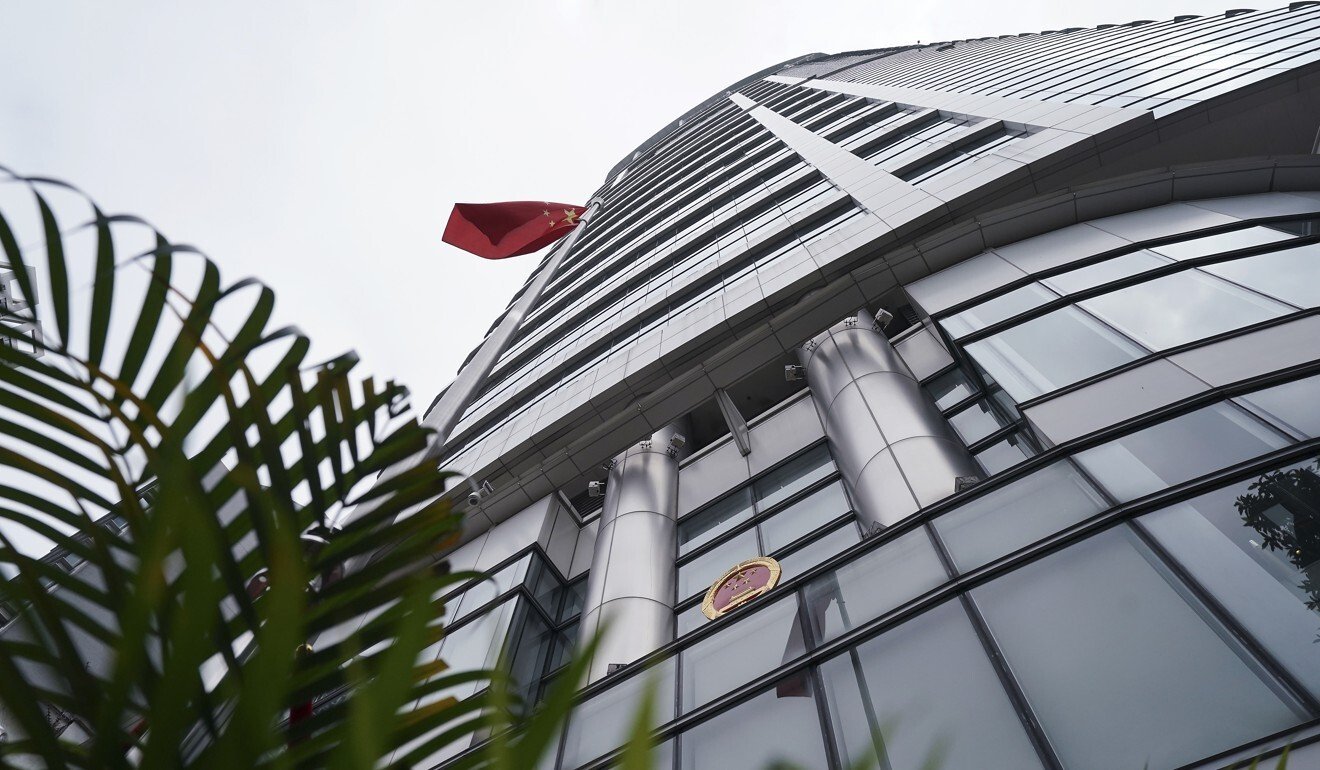 The Office for Safeguarding National Security in Causeway Bay.

The government would make better use of the annual National Constitutional Day and National Security Education Day to conduct public education on a large scale, Lam continued, while two pieces of legislation would be amended to strengthen procedures surrounding lawmakers, judges and civil servants’ pledges of allegiance to the city and to the Basic Law.

Meanwhile, Lam appeared to take a somewhat softer stance on young protesters facing prosecution over last year’s unrest. Police were prepared to consider handling cases concerning arrestees under 18 who were not involved in serious offences with measures conducive to their rehabilitation, such as through caution and bind-over orders, she said. But the prerequisite was that the minors must admit their wrongdoing, she added.

As expected, a key focus of Lam’s policy address concerned integration into the Greater Bay Area, a plan to turn a cluster of cities in Guangdong, along with Hong Kong and Macau, into an economic powerhouse.

The Stock Connect trading schemes between Hong Kong and the cities of Shanghai and Shenzhen would be enhanced, Lam said, by opening up the cross-border investment programme to loss-making biotechnology firms listed in Hong Kong, and stocks listed on the mainland’s sci-tech innovation board.

The Airport Authority Hong Kong, which runs the city’s airport, will acquire more shares in Zhuhai Airport, a smaller airport in the bay area for domestic travel, to “deepen cooperation” in the aviation sector and build a “world-class aviation cluster”.

Meanwhile, a youth employment scheme will be launched to encourage enterprises with operations in both Hong Kong and the bay area cities to recruit and deploy local university graduates to work on the mainland. The scheme will provide 2,000 places.

One of the most immediate measures Lam vowed to take to help out local businesses hit hard by the pandemic-related downturn was the abolition of the doubled ad valorem stamp duty (DSD) on commercial properties from Thursday. Scrapping the tax would lower transaction costs on commercial real estate deals, and could trigger investment, analysts have said.

Noting that Hong Kong’s GDP was expected to shrink by 6.1 per cent this year – the worst decline on record – Lam said the city would evolve in its role as a middleman between the mainland and the rest of the world. With Beijing following a new “dual circulation” economic strategy prioritising what it calls internal circulation – or fostering self-sustaining domestic demand over exports – “Hong Kong can further strengthen its intermediary role” when it comes to so-called external circulation, or engagement with outside markets, Lam said.

4. Beating back the Covid-19 pandemic

Successfully battling the coronavirus pandemic relied on mainland help, including the central government’s pledge to reserve a certain amount of vaccines developed or produced on the mainland for use by Hong Kong people when necessary, Lam said.

An important aspect of the city’s recovery is the resumption of cross-border travel, a point Lam floated to central government officials during her recent meetings on the mainland, only to be rebuffed and sternly reminded to prioritise virus control measures at home.

In light of this, Lam said, a universal community testing scheme – similar to the one seen in September – might have to be brought back to achieve the target of zero local infections necessary to reopen the border with the mainland, though she offered few other details as to how this might be accomplished.

Unlike with Lam’s past policy speeches, housing and land took a back seat this year. She said the government had identified 330 hectares of land on which to build 316,000 public housing units over the next 10 years. 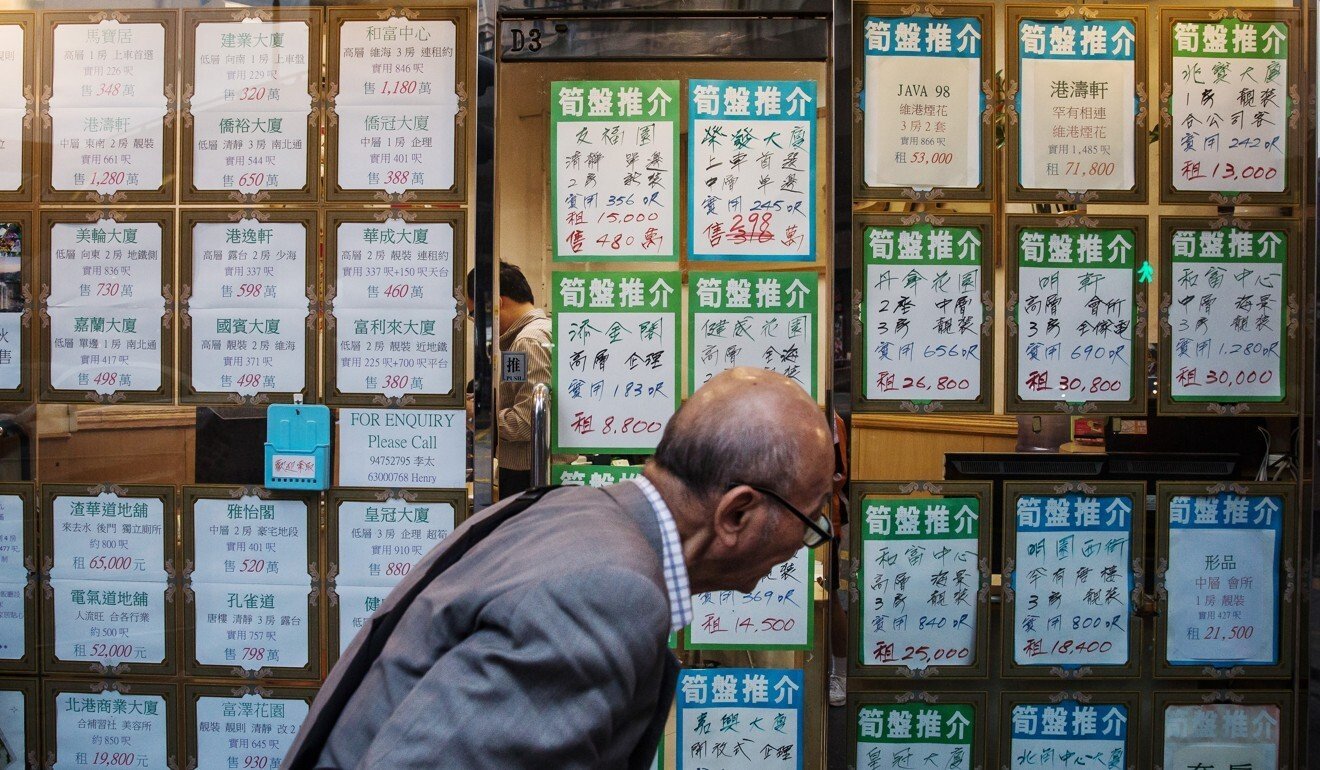 A man looks at residential property advertisements in the window of an estate agency in North Point.

The decision to expedite the Northern Link railway project was new, and would make 90 hectares of land available to deliver over 70,000 housing units.

Meanwhile, some quick relief will be provided for about 90,000 people in the long queue for public housing, including a cash allowance for low-income applicants and turning hotels and guest houses with low occupancy rates into transitional housing.

Lam’s signature policy, the controversial, and gigantic, Lantau Tomorrow Vision land-reclamation scheme, will also be effectively expedited, with the government retracting from the legislature several funding requests for civil service posts that were slated to be reviewed prior to the one for Lantau. A HK$550 million (US$71 million) funding push for a preliminary study into the Lantau plan will be the next item on the agenda for the Legislative Council, now dominated by the pro-establishment camp, to vet.