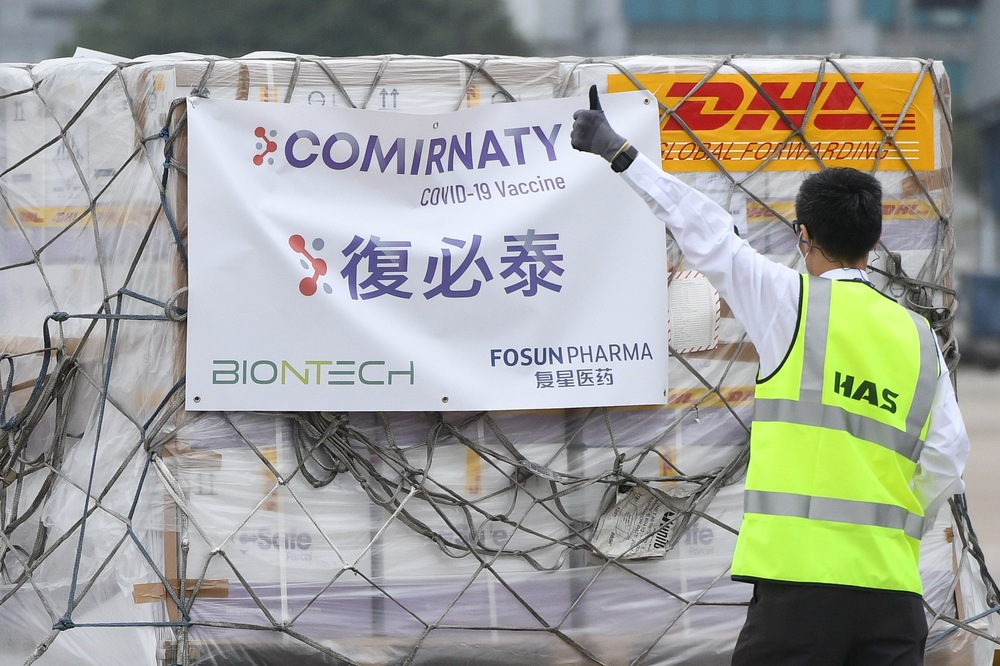 More than 500,000 doses of the Pfizer-BioNTech vaccine arrived in Hong Kong today, after a two-day delay due to export restrictions.
Carried by Cathay Pacific Airways flight CX 2066, the first batches of the US-German jabs from Germany landed at Hong Kong International Airport at 10.25am.

Secretary for Civil Services Patrick Nip Tak-kuen and health secretary Sophia Chan Siu-chee were among those who greeted the plane's arrival at the apron area.

Today's 585,000 jabs were sent to the central distribution center in a Kwai Chung warehouse.

The supply will provide inoculations for around 2.4 million frontline medics and at-risk citizens who have priority in the vaccination drive launched earlier this week, offering an alternative for the Sinovac jabs.

Another batch of the Pfizer-BioNTech jabs was set to arrive in the city next week, fulfilling the government's order of 1 million.

Residents will be able to make appointments for the inoculation next week via the government's online booking system. But details were yet to be announced.

In a statement, the government said it will open seven of the 24 vaccination centers slated for BioNTech jabs first, as the vaccines must be kept at a low temperature and require proper defrost procedures.

The remaining premises will be open in phases later.

About 6,000 people received the mainland-manufactured vaccines at five venues and 18 public outpatient clinics on Friday, the first day of the mass vaccination program.

They were among the 70,000 residents who had registered for the vaccination in the coming two weeks.

The administration has ordered a total of 22.5 million doses of vaccines from three pharmaceutical manufacturers: Sinovac Biotech, AstraZeneca and Fosun Pharma, which provides vaccines jointly developed by Germany's Pfizer and US-based BioNTech.

While the first batches of Sinovac and Pfizer-BioNTech jabs were delivered in Hong Kong, the AstraZeneca vaccines will be expected in the second half this year.
#vaccine  #Pfizer  #BioNTech  #AstraZeneca  #Vaccines
Add Comment