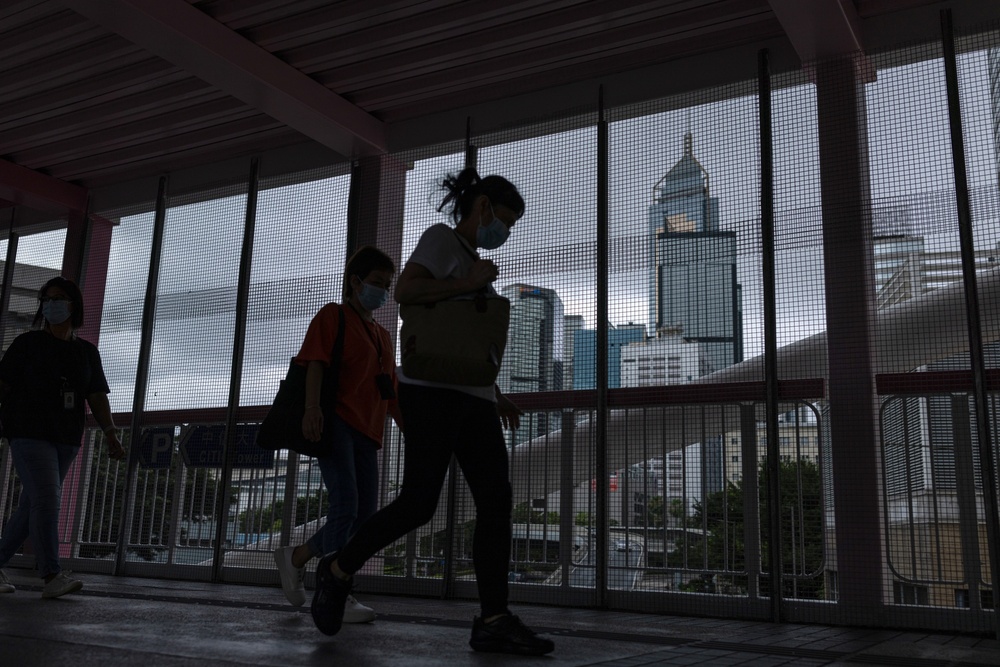 Finance summit tinged with drama before it even begins

It hasn’t even officially started yet, but Hong Kong’s long-awaited summit for global bankers is already tinged with drama.
At least four top executives have pulled out, including Blackstone Inc. President Jonathan Gray and Citigroup Inc. Chief Executive Officer Jane Fraser, who both got Covid. The city’s financial secretary tested positive for the virus while on an overseas trip, creating doubt over whether he can join in person. The approach of a severe tropical storm raises the risk of the city grinding to a halt during the summit.

The local stock market is providing extra fireworks. Rumors that Beijing is forming a committee to look at how to exit Covid Zero sent the Hang Seng Index up as much as 6.4 percent on Tuesday, the latest swing in a wild stretch that saw it sink to a 13-year low.

In a further surprise, Hong Kong announced late Tuesday that People’s Bank of China Governor Yi Gang will address the summit, along with other top policy makers.

Private jets have been flying into the city for days as bankers from around the world including Goldman Sachs Group Inc.’s David Solomon and Morgan Stanley’s James Gorman arrive to attend the Global Financial Leaders’ Investment Summit. Hong Kong is seeking to use the event to relaunch itself as an international finance center after years of pandemic-induced isolation and a crackdown on dissent.

The summit comes amid heightened tensions between the US and China, with the world’s two largest economies sparring in recent months over trade, human rights and Beijing’s aggressive moves against Taiwan. Global investor confidence in Chinese assets has been pummeled by President Xi Jinping’s efforts to combat the virus, as well as a yearlong crackdown on private enterprise and the property market.

The stakes are high for global financial institutions, which retain a significant presence in Hong Kong. Many banks and asset managers have been on an investment and hiring spree in mainland China and Hong Kong in recent years as the world’s second-biggest economy opened its US$60 trillion financial market. The combined disclosed exposure of the biggest Wall Street banks in China was about US$57 billion at the end of 2021.

“Foreign banks are still keen to do business or explore opportunities in mainland China and Hong Kong,” said Lloyd Chan, senior economist at Oxford Economics. “However, banks will still have to grapple with a business environment that continues to be uncertain and challenging, as strained relations between US and China imply economic and financial risks, which they have to be watchful of.”

The executives will first attend a closed-door meeting with Hong Kong Monetary Authority officials on Tuesday, followed by a welcome dinner at the M+ Museum overseeing the Victoria Harbour. The summit takes place the following day at the ballroom in the Four Seasons hotel, with moderators including Eddie Yue, chief executive of the HKMA.

On Thursday, top fund managers will take part in a forum at the main hall at the stock exchange, including Carlyle Group Inc. founder Bill Conway and Man Group Plc’s CEO Luke Ellis. The two panels are entitled “Creating Value Through Uncertainties” and “Managing Through Volatile Markets.”

Such a high-profile gathering in Hong Kong is drawing criticism. US Senator Jeff Merkley and Democratic Representative Jim McGovern urged US bankers to cancel their visit, Reuters reported.

Their attendance “only serves to legitimize the swift dismantling of Hong Kong’s autonomy, free press, and the rule of law by Hong Kong authorities acting along with the Chinese Communist Party,” McGovern wrote in a tweet last week.

Since Beijing imposed a broad national security law on Hong Kong in 2020, the city has jailed dozens of opposition figures and overhauled the legislature. Current leader John Lee, who was sanctioned by the US along with other officials for his role in the crackdown, will give the first keynote speech at the summit.

The number of attendees dropping out is increasing. Capital Group Cos.’s Chief Executive Officer Timothy Armour became the latest to drop out for health reasons, according to a spokesperson. He was due to talk on a panel on Thursday. Barclays Plc Chief Executive Officer C.S. Venkatakrishnan also decided against the summit after scrapping his Asia trip.

The summit, hosted by the HKMA, is expected to go ahead despite the approach of severe tropical storm Nalgae. The city’s observatory on Tuesday said it would consider raising the no. 8 storm signal during the day on Wednesday. Hong Kong has a detailed series of weather alerts that determine whether businesses, schools and public transport operate, including the US$4.1 trillion stock market. The no. 8 signal can effectively shut down the city.

“Hong Kong is well prepared for the potentially difficult weather and the summit is no different. The summit and its important conversations will proceed as planned,” a HKMA spokesperson said in an emailed statement.

The conference will be followed by the international Rugby Sevens tournament, which starts on Friday in its first return to the city since 2019. The events are part of a series of measures aimed at reviving Hong Kong’s outlook. The city is struggling to recover from Covid restrictions, rising interest rates and weak global demand, while it faces mounting competition from Singapore as a regional hub for global business and talent.

Shares of Hong Kong’s exchange operator have plunged 50 percent this year, reflecting a slump in daily turnover and initial public offerings. The local currency is near the weak end of its trading band against the dollar, showing capital outflows. The economy shrank 4.5 percent in the third quarter, according to advance estimates released by the government on Monday. That was far weaker than economists’ forecasts for a 0.8 percent decline and is the worst contraction since the second quarter of 2020.

While Covid curbs have been eased, attendees to the summit still face the following restrictions, according to the HKMA and the Health Bureau:

Visiting guests will undergo Covid tests before departure, on arrival and throughout first three days; Participants will stay at designated hotels, and events will only take place at specific venues, to help ensure they are segregated from residents and appropriate control measures can be deployed; Attendees will be able to have meals with others in private rooms and visit certain venues that require active checking in the first three days, a tailored rule for the summit. Typically, visitors to the city are forbidden from dining out or going to bars in the first three days; Guests who test positive can leave by chartered flight. Otherwise, they will be subject to least seven days isolation, which can take place at home or in a hotel.
#Covid
Add Comment