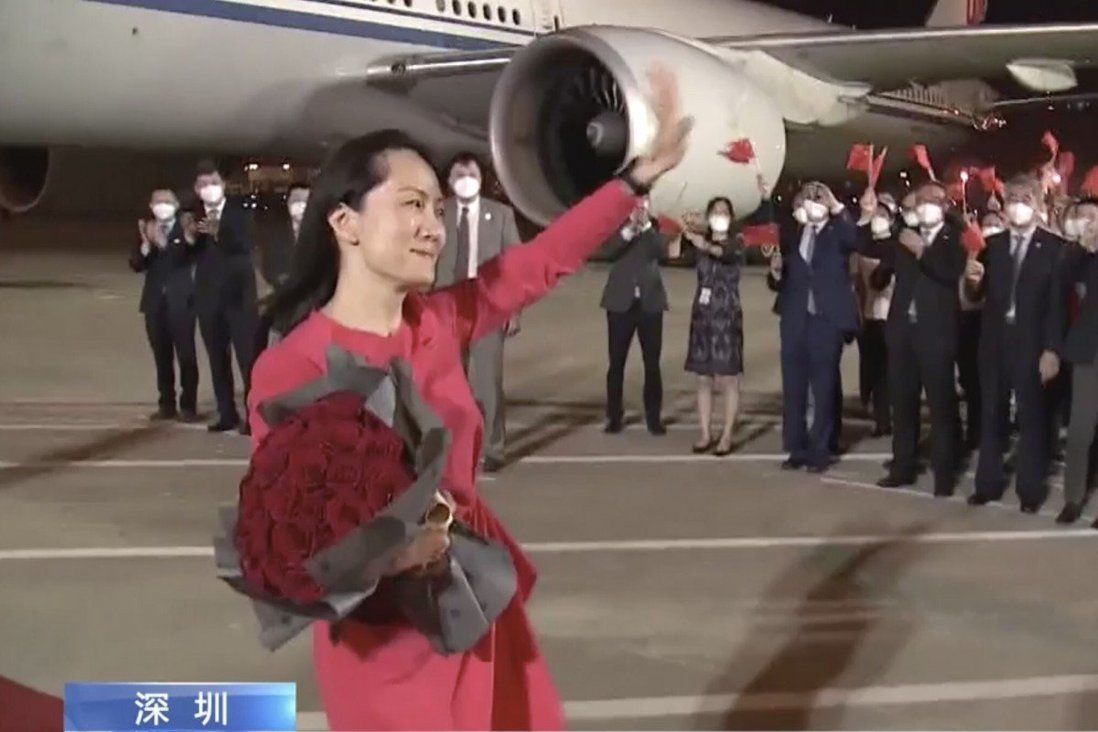 Huawei Technologies’ executive Meng Wanzhou landed in China on Saturday evening, after nearly three years under house arrest in Canada, to a hero’s welcome cheered by supporters in a homecoming state media portrayed as a sign of a strong country and a diplomatic coup for Beijing.

State broadcaster CCTV showed a teary-eyed Meng, wearing a red wraparound dress, receiving a bouquet of roses and being greeted by an assembled crowd waving mini national flags on the tarmac of the international airport of Shenzhen, Huawei’s base, after her flight landed at 9.50pm.

Meng waved to the 100-strong crowd and acknowledged the shouts of “Welcome home”. She then gave a brief speech, addressing Zhang Xin, deputy provincial governor of Guangdong, and Shenzhen mayor Qin Weizhong, and beginning by saying: “Finally, I am home.” 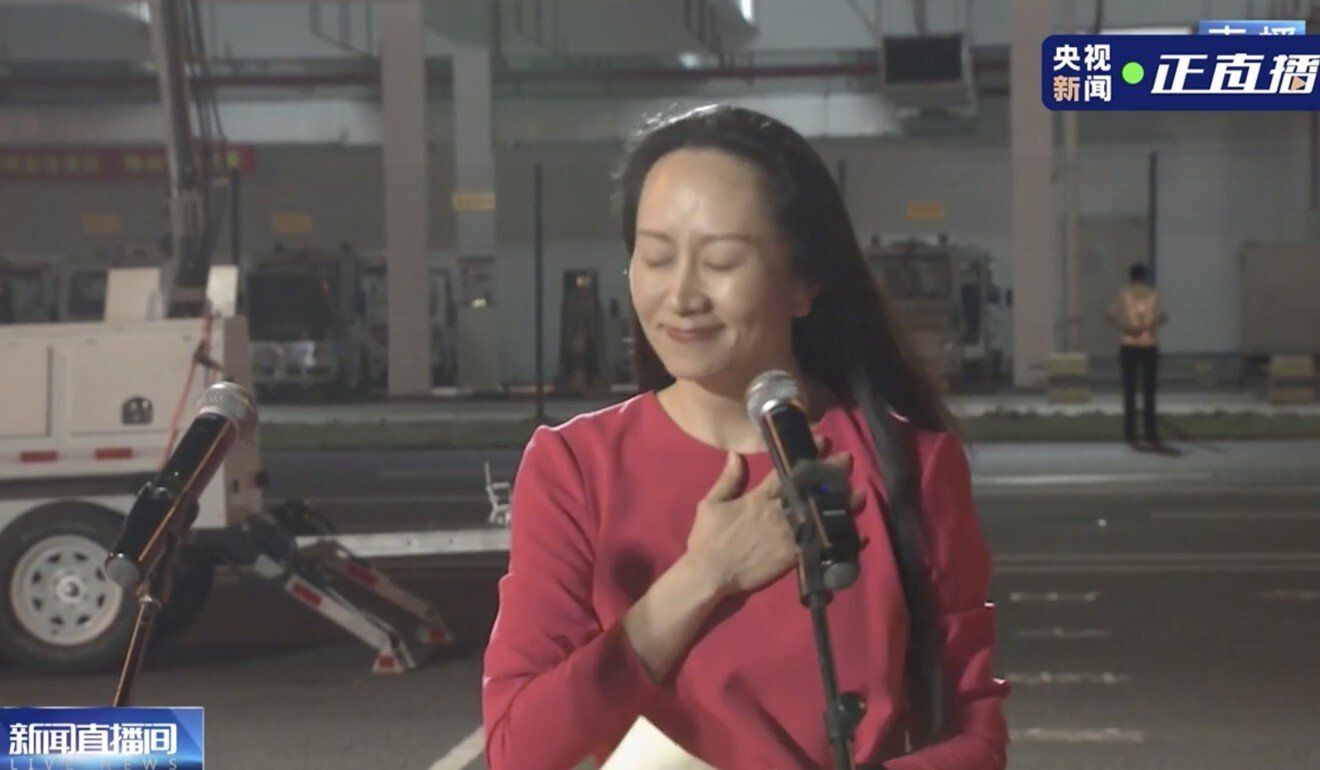 Meng Wanzhou’s first words were: ‘Finally, I am home.’

Meng, Huawei’s chief financial officer and executive director, reached a deal on Friday with prosecutors in New York that effectively resolved a US fraud case that had kept her in legal limbo in Vancouver since late 2018 as she fought extradition to the United States. The case involved HSBC and US sanctions against Iran.

She mentioned President Xi Jinping twice in her speech on the airport tarmac, referring to him as Chairman Xi.

“Chairman Xi cares about the safety of every Chinese citizen, and he also has my situation in his heart, I am deeply touched by this,” she said.

Meng, who said she would be subject to quarantine measures, then entered a gold-coloured minivan to take a Covid-19 test. She was to be taken to a quarantine spot, CCTV reported.

The live broadcast of her arrival was watched by nearly 100 million viewers at its peak. 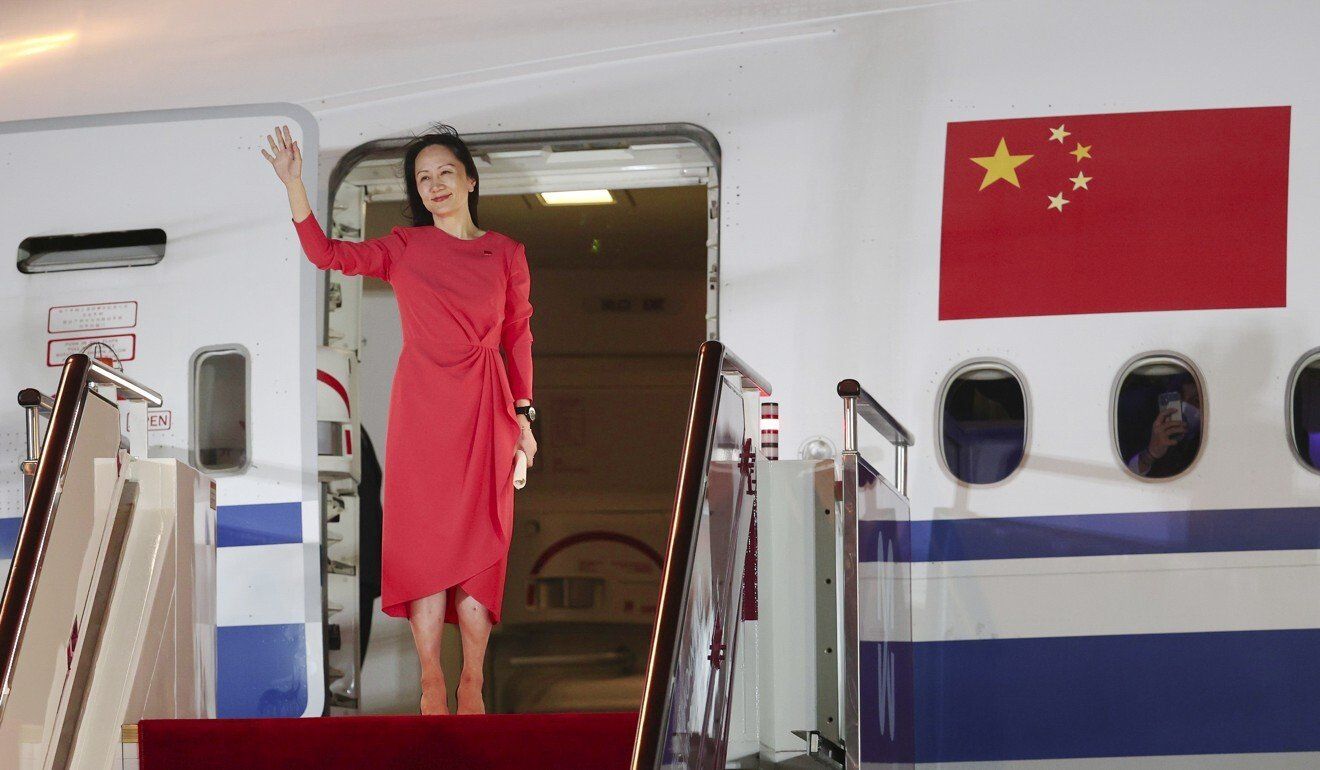 Meng Wanzhou waves to the crowd as she steps out of the charter plane.

The reception for 49-year-old Meng, daughter of Huawei founder Ren Zhengfei, was unusually grand even by Chinese standards. Red carpets were rolled out on the tarmac, and state television, including CCTV, provided live coverage for hours.

To show her release was a symbol of state power, China’s ambassador to Canada, Cong Peiwu, accompanied Meng on the flight from Vancouver.

Xinhua confirmed on Saturday morning that her return was a result of “unremitting efforts of the Chinese government”. People’s Daily, mouthpiece of the ruling Communist Party, said in an editorial Meng’s release was “a major victory of the Chinese people” and showed “no power can stop China’s advancing steps”. 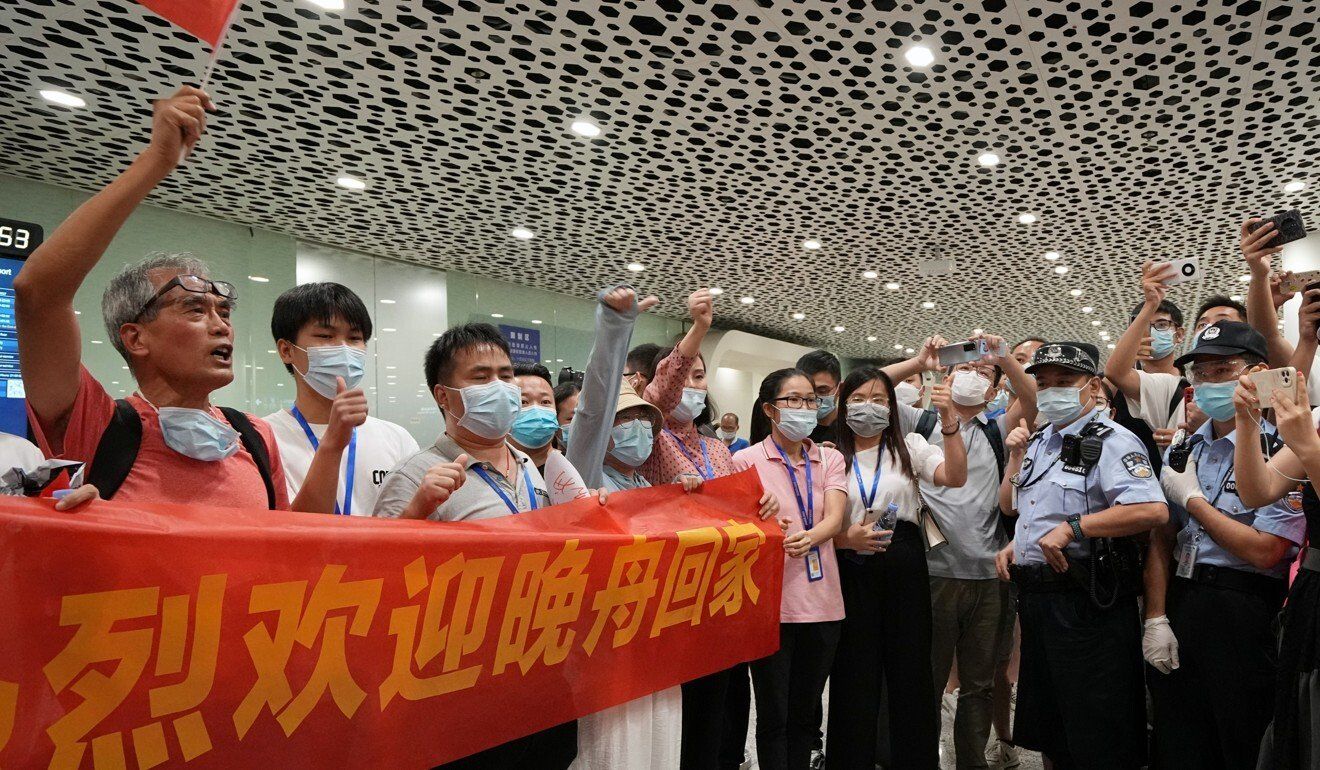 Throughout the day, internet users were busy tracking her flight CCA552, chartered by the central government, as it made its way across the Arctic Ocean, many describing her as the country’s heroine.

At the arrival hall in Shenzhen Baoan International Airport, thousands of people had gathered to welcome her home. Some held banners, flowers and Chinese national flags. Others wore red masks with the national flag printed on them.

Banners displayed the message “Welcome home Ms Meng Wanzhou” while chants of “Meng Wanzhou, you’re a heroine. We love you” could also be heard. Airport security staff were on hand to keep order.

The tallest skyscraper in Shenzhen, the 555-metre Ping An Finance Centre, was also lit up with the message “Welcome home Meng Wanzhou” on Saturday evening.

“Facts have already fully proved that this is an incident of political persecution against a Chinese citizen, with the purpose of suppressing China’s hi-tech enterprise,” Hua was quoted as saying.

“The fraud accusations against Meng are purely ­fabricated with HSBC, which the US refers to as a ‘victim’, offering ­sufficient documents to prove Meng’s innocence. The actions of the United States and Canada [on Meng] are typical arbitrary ­detentions.” 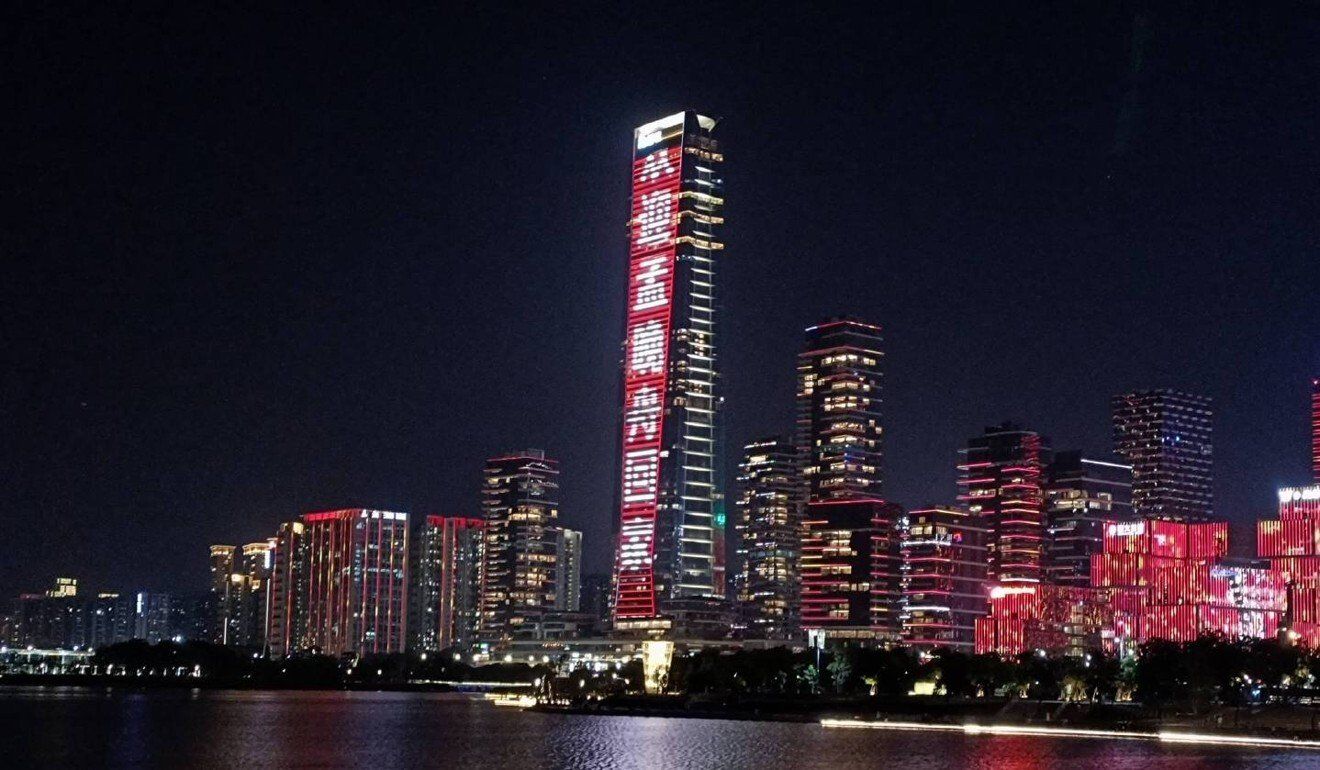 A welcome home message on Ping An Finance Centre in Shenzhen.

Hua did not mention Canadians Michael Kovrig and Michael Spavor, freed from detention in China as part of a three-way deal involving Meng. The pair, whose release was announced by Canadian Prime Minister Justin Trudeau, arrived in Calgary in western Canada early on Saturday. Trudeau greeted the pair at the airport.

The “two Michaels” – as they were dubbed by international media – were detained just days after Meng, on what Ottawa had contended were “trumped up” espionage charges.

Meng’s deferred prosecution agreement, which will see charges shelved then dropped, was approved at a US Federal Court hearing in Brooklyn, which she attended via video link.

She then made a brief appearance at the Supreme Court of British Columbia, where the request for her extradition was withdrawn and her bail conditions lifted, bringing to a close a marathon case that had thrown China’s relations with Canada and the US into crisis.

The extradition saga began after Meng was arrested at Vancouver International Airport in December 2018. She was wanted by the US for allegedly defrauding HSBC by lying about Huawei’s dealings in Iran, putting the bank at risk of breaching US sanctions. 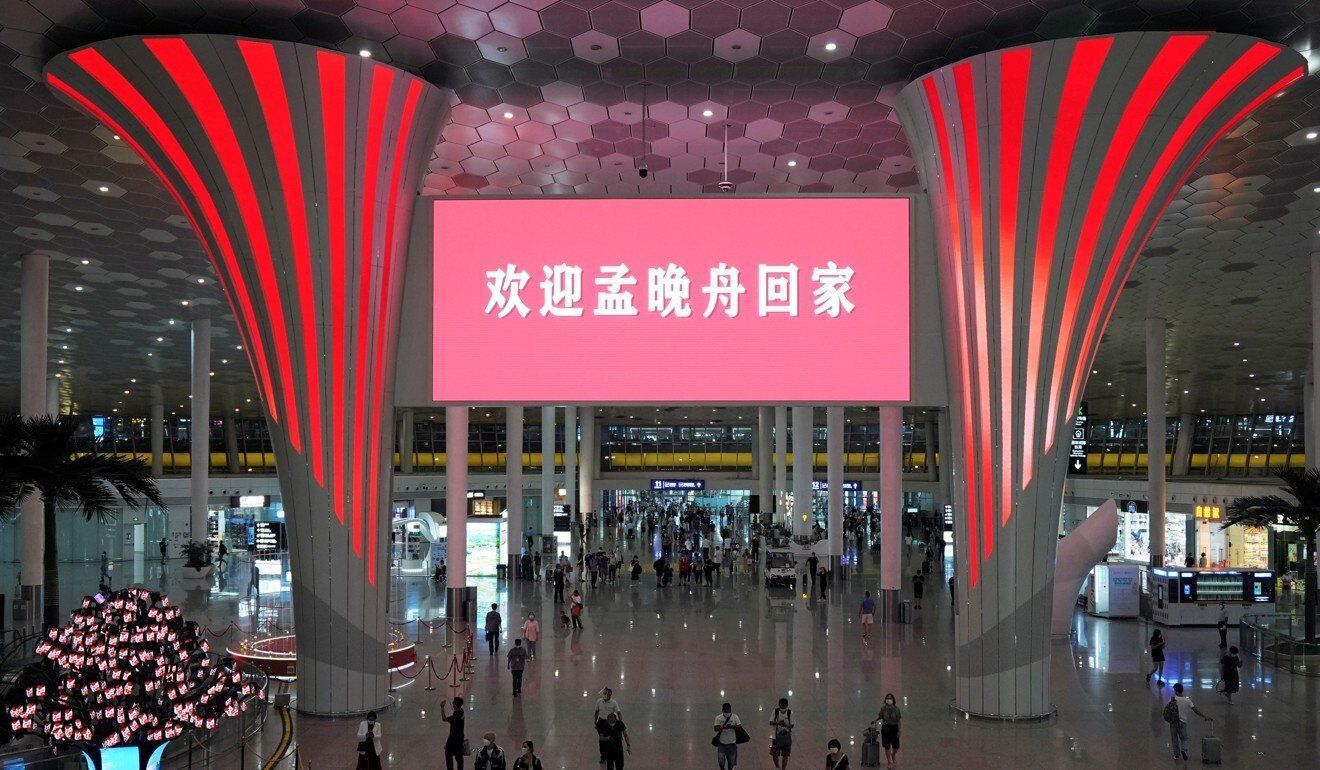 Chinese social media was filled with images and texts of Meng on Saturday.

A tearful Meng gave a brief statement at the airport before she left Canada for China.

“I thank my motherland and the people in my motherland for their support and help. They are the biggest support for me to hold on until now,” she told reporters.

Meng also released a statement on her flight to Shenzhen, in which she once again thanked the authorities for her release.