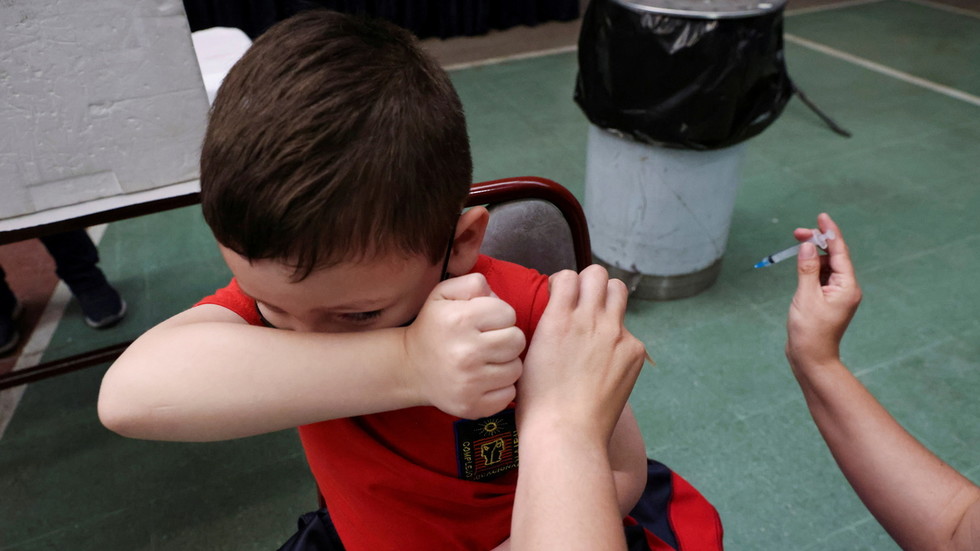 FDA approves Pfizer jab for kids, but even they don’t seem sure it’s safe

American children have no choice but to act as experimental test subjects for the Pfizer Covid-19 vaccine to determine the jab’s safety, the Food and Drug Administration has apparently concluded. Good luck, kids!
“We’re never going to learn about how safe the vaccine is unless we start giving it,” editor of the New England Journal of Medicine and Harvard adjunct professor Eric Rubin argued last week, his words buried within the eight-hour barrage of presentations and discussions that swirled around the FDA advisory panel's approval of the mRNA jab for children aged five to 11.

The FDA followed up on the advisory panel’s 17-0 recommendation with approval, as it typically does, on Friday. If the Centers for Disease Control and Prevention follows suit, some 28 million American children will be quickly served up as fresh-faced fodder for a smaller dose of the Covid-19 vaccine already poised to inject some 100 million American adults. That is, as soon as President Joe Biden is able to whip up a legally-binding demand he can submit to the Occupational Safety and Health Administration.

Friday’s FDA approval means only the CDC stands between American children and a warp-speed rollout of the Pfizer jab. However, the rush to approval doesn’t necessarily mean there are no concerns. A disturbingly large portion of the FDA committee’s members are connected to Pfizer in some way or another, leading vaccine skeptics to cry foul. Meanwhile, a growing portion of the country continues to denounce the mandates in general, insisting everyone should be able to make their own decision regarding whether or not they wish to get injected.

Echoing the newly-reanimated pro-choice slogan, mandate protesters recently swarmed the Brooklyn Bridge declaring ‘My body, my choice’ as New York City employees faced the potential loss of their jobs as firefighters, police officers, sanitation handlers, and corrections officers due to Mayor Bill de Blasio’s insistence that all municipal employees get vaxxed or be relegated to the purgatory of open-ended unpaid leave.

The FDA’s effort to put the cart so far in front of the horse mirrored the words of House Speaker Nancy Pelosi during the congressional tug-of-war over Obamacare in 2010. Faced with a phonebook-sized, dubiously-legal bill unlike anything Congress had passed before and no realistic timeframe to wrangle with the details, Pelosi suggested Congress would have to “pass the bill to find out what’s in it, away from the fog of controversy.”

Since then, legislation by brute force has only grown as the means by which laws are passed in the US, as ever-more-polarized parties refuse to give an inch and betray the appearance of weakness. Allowing the ‘other side’ to be seen as achieving even the slightest victory is unconscionable, and that framework remains in place in the vaccination arena – where it makes less sense than anywhere else.

After all, it was former President Donald Trump’s Operation Warp Speed that brought the world the Pfizer shot, even if the jab itself wasn’t rolled out until shortly (some would say deliberately) after the 2020 election and vaccine mandates have since become a cause celebre of the Democratic Party.

With half the US up in arms about the other half’s supposed refusal to roll up its sleeves and submit to an intensely politicized needle, anyone who hesitates is denounced posthaste in a 21st-century witch hunt – to be fired, if not set on fire; outfitted with the scarlet A for anti-vaxxer, not adulteress; and otherwise chased out of the public square – deplatformed from Twitter, YouTube and Facebook, if not chased physically with pitchforks and torches. Similar divisions have erupted across Europe, and countries like Italy and France have pushed the issue even further, barring the unvaccinated from so much as entering grocery stores to buy food.

While the US study of the Pfizer vaccine’s effects on children five to 11 failed to turn up any deadly side effects, critics argued its population size was too small to be effective for such a purpose. Parents of some jab recipients have observed disturbing symptoms in their offspring in the hours and days following the shots and filmed heartbreaking testimonials describing their downfall from healthy children to pain-wracked perma-patients experiencing near-constant seizures, facial distortions, debilitating heart problems, or other dire health issues.

Another doctor on the FDA committee, Michael Kurilla of the National Institutes of Health, abstained from voting on recommending Pfizer-BioNTech's vaccine entirely, citing a lack of evidence that all children need the shot, and while Kurilla, an infectious disease and pathology expert, was the only panel member to abstain from voting, he was not the only member to openly express misgivings about doling out the jab to young Americans. His colleague, Dr. Cody Meissner of Tufts University, suggested that it would be an “error” to mandate the jab for children to return to school until there was more hard data.

“We simply don’t know what the side effects are going to be,” he said, acknowledging the shot ​​– like its adult equivalent – probably wouldn’t prevent transmission of the virus. While he was not opposed to administering the shot to certain vulnerable subgroups inside the 5-11 age group, Meissner was concerned approving the shot for everyone in that category would lead to a heavy-handed mandate the likes of which is currently being wielded against American adults.

Children who receive the Pfizer-BioNTech jab may actually get less immunity and face more risk than supplied by getting and recovering from a current strain of Covid-19, Kurilla told the Daily Mail, referring to the Delta variant and other current strains of Covid-19 circulating among the population. “The question really becomes, does this vaccine offer any benefits to them at all?” he asked rhetorically during the FDA committee meeting. He would have voted ‘yes’ if the FDA had merely proposed opening up access to the vaccine to a ‘subset’ of those ages five to 11, but he disagreed with administering it to all children within that age group.

Two other panel members voted to approve despite their misgivings. Meissner argued that a “very small percent of otherwise healthy six-to-11-year-old children…might derive some benefit,” while President and CEO of Meharry Medical College James Hildreth agreed that “vaccinating all of the children…seems a bit much for me,” pointing to the relatively low risk of hospitalization and near-zero risk of death by Covid-19 for children.

Speaking up against the jab, even circumstantially, has become the kiss of death in the medical community, with even medical rock stars like Robert Malone, one of the inventors of mRNA as a drug, cast into the dustbin of history for expressing skepticism that his invention was being incorrectly used to deliver the Covid-19 vaccine.

However, governments worldwide are setting themselves up for civil war as populations are forced to choose one ‘side’ or another. Even many of the vaccinated have acknowledged that the jab should not be forced on anyone, while entire industries like shipping, air travel, defense, and the like grind to a halt as mandates run up against the stubborn will of their employees. Southwest Airlines was allegedly forced to cancel thousands of flights earlier this month, due to a reported mass ‘sickout’ by air traffic controllers unwilling to get vaxxed, though the airline itself has denied this, and rumors of trucker strikes from Australia to America have food sellers panicking at the thought of empty shelves.

As it stands, parents who were willing to submit themselves to experimental shots in the name of convenience and retaining employment may not be so willing to offer up their children as sacrifices to a company once denounced by the US Justice Department as the worst fraudster in the pharmaceutical industry.

Governments that have shown themselves as profoundly untrustworthy throughout the Covid-19 pandemic are unlikely to change their behavior at the last minute, and parents are wise to take care in where they place their trust.
#Donald Trump  #Joe Biden  #Facebook  #BioNTech  #COVID-19  #vaccine  #Pfizer  #Covid
Add Comment