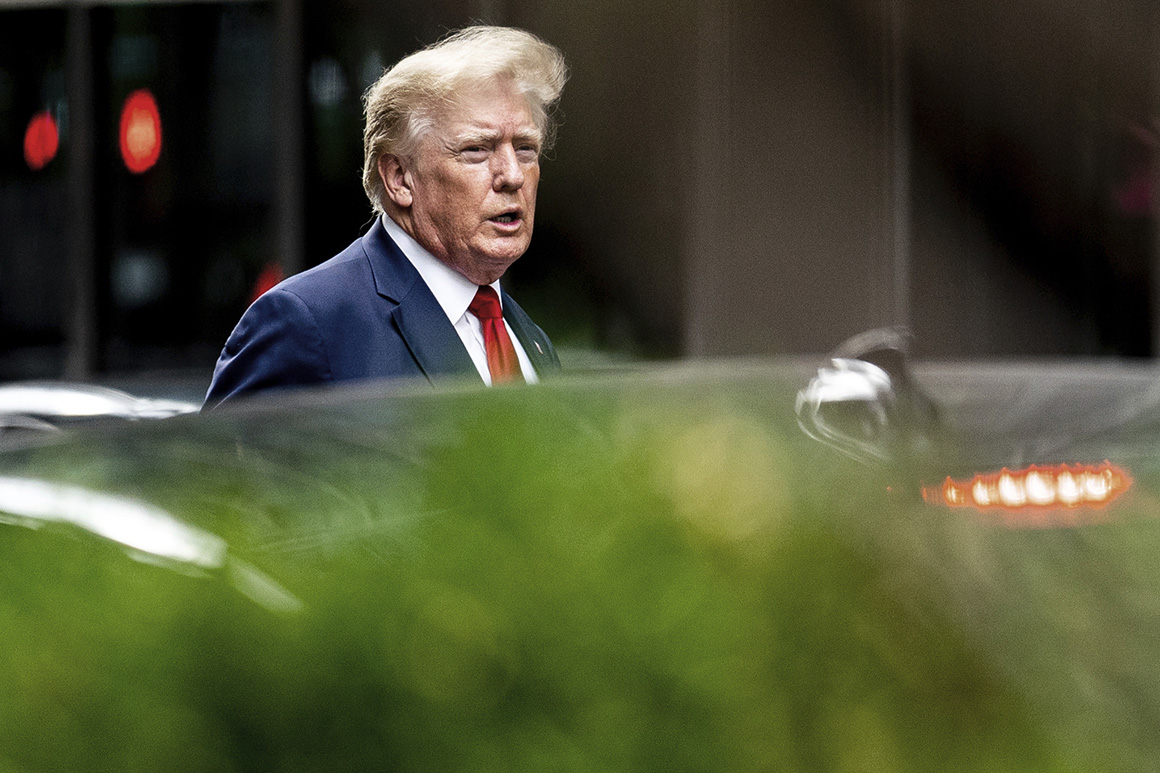 A search warrant viewed by POLITICO reveals that the FBI is investigating Donald Trump for potential violations of the Espionage Act and obstruction of justice laws.

A search warrant newly unsealed on Friday reveals that the FBI is investigating Donald Trump for a potential violation of the Espionage Act and that agents removed classified documents from the former president’s Florida estate earlier this week.

A receipt accompanying the search warrant, viewed by POLITICO in advance of its unsealing, shows that Trump possessed documents including a handwritten note; documents marked with “TS/SCI,” which indicates one of the highest levels of government classification; and another item labeled “Info re: President of France.”

Also among the items taken from Mar-a-Lago this week: An item labeled “Executive grant of clemency re: Roger Jason Stone, Jr.,” a reference to one of Trump’s closest confidants who received a pardon in late 2020.

The warrant shows federal law enforcement was investigating Trump for removal or destruction of records, obstruction of justice and violating the Espionage Act — which can encompass crimes beyond spying, such as the refusal to return national security documents upon request. Conviction under the statutes can result in imprisonment or fines.

The documents, unsealed after the Justice Department sought their public disclosure amid relentless attacks by Trump and his GOP allies, underscore the extraordinary national security threat that federal investigators believed the missing documents presented. The concern grew so acute that Attorney General Merrick Garland approved the unprecedented search of Trump’s estate last week.

The disclosure of the documents comes four days after Trump publicly confirmed the court-authorized search of his Mar-a-Lago home by the FBI, marshaling his political allies to unleash fierce criticism of federal investigators. But the details in the warrant underscore the gravity of the probe — an unprecedented investigation of a former president for mishandling some of the nation’s most sensitive secrets.


Trump’s office, in a statement provided to John Solomon — the conservative journalist who is one of Trump’s authorized representatives to the National Archives — claimed late Friday that Trump often took classified documents to his residence and had issued a never-before-revealed “standing order” that all documents removed this way “were deemed to be declassified.”

“The power to classify and declassify documents rests solely with the President of the United States,” the statement read. “The idea that some paper-pushing bureaucrat, with classification authority delegated BY THE PRESIDENT, needs to approve of declassification is absurd.”

But that’s stands in contrast with how Trump’s office has handled matters of declassification in the past. In Oct. 2020, the final month before the election, then-chief of staff Mark Meadows declared to a court that a Trump tweet deeming all Russia probe-related materials declassified was not in fact a “self-executing order” from the president.

Trump has claimed since Monday that he has cooperated with investigators from the National Archives and FBI for months and that the unannounced search was an unnecessary escalation. But after several rounds of negotiations in which materials were recovered by the Archives, federal investigators came to believe Trump hadn’t returned everything in his possession.

The search warrant, signed on Aug. 5 by federal magistrate judge Bruce Reinhart, revealed that dozens of items were seized, most of them described in vague terms like “leatherbound box of documents,” “binder of photos” and “handwritten note.”

Other items on the list indicate the presence of classified material, describing them as “miscellaneous top secret documents” and “miscellaneous confidential documents.”

Stone’s attorney Grant Smith said that the longtime Trump ally “has no knowledge as to the facts surrounding his clemency documents appearing on the inventory of items seized from former President Trump’s home at Mar-a-Lago.”

Shortly after 3 p.m., the Justice Department confirmed that Trump’s lawyers would not oppose the public release of the search warrant and underlying receipt of materials, which had already begun to circulate widely.