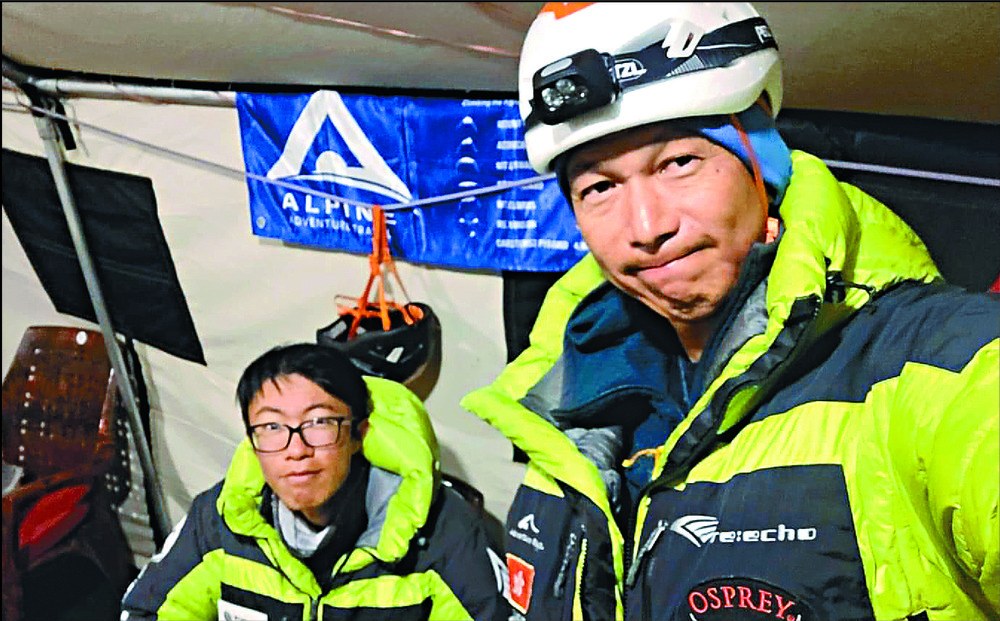 Conquering Mount Everest was an "unforgettable" experience, said veteran climber John Tsang Chi-sing after he summited the mountain with his 18-year-old son Bob on Thursday.
The two - one of the few father-and-son duos to conquer Everest together - are currently resting in a camp in Nepal.

The journey to the summit was quite smooth, they said yesterday, but the ascent was delayed by over two hours due to strong winds.

John, 49, said the idea to climb the mountain together was raised many years ago by his son, with the latter now having the bragging right for being the youngest Hongkonger to conquer the 8,849-meter-high mountain.

John, who has now summited Everest four times, said the most difficult part of the journey is not technique but physical and psychological adaptability.

"The thing to overcome is adapting to the height and [making sure your] body can function properly at an altitude of between 8,000m to 9,000m."

John said he suffered from digestive discomfort during the journey but his son was less sensitive to the high altitude and did not experience headaches, shortness of breath or digestive issues.

Bob seemed unfazed by achievement, saying it was much more important to find something one loved doing.

"I climbed this mountain simply because I like what I am doing now. Finding something to persevere in is very important in life," he said. "I believe someone younger than me will climb Everest after a few years."

The two had arrived in Nepal on March 8 - two months before they began climbing Everest on May 8.

Those two months were spent in training, with the duo climbing three mountains nearby - each over 6,000m high.

John took to Facebook yesterday to say the journey had been difficult, adding: "But we can never give up on what we love just because it's hard."

He concluded the post by hoping Hongkongers around the world would continue to work hard and pursue their dreams.

Next, the duo will set their sights on Denali, a 6,910m-high mountain in the United States. "Let's hope everything goes well. Denali, we're coming for you next," Bob posted on social media yesterday.
#Facebook
Add Comment