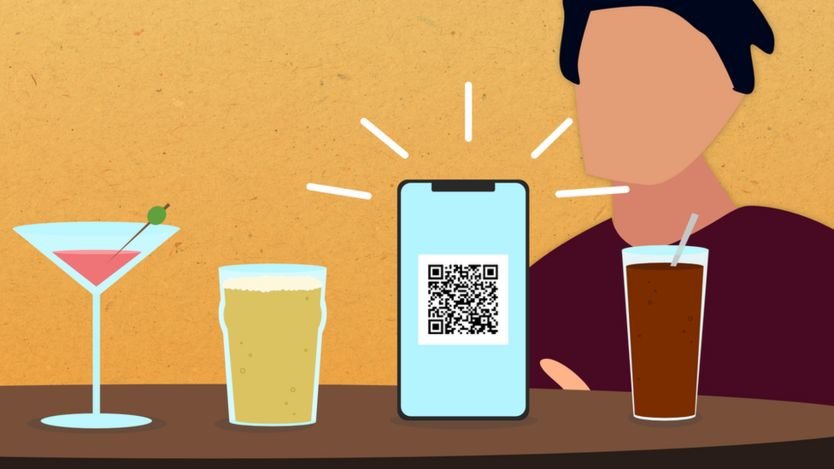 Fancy a pint? in UK you might need an app for that

Fancy a pint in the pub? From 4 July, you can have one - or indeed a mojito or an orange juice - in England

But you probably won't be able to stroll up to the bar and order what you fancy.

And in many places, you may find you need an app for that.

The government has published a lengthy document, giving guidance to restaurants, pubs and takeaways on all the measures they will need to take to operate safely.

One paragraph stands out: "The opening up of the economy following the Covid-19 outbreak is being supported by NHS Test and Trace. You should assist this service by keeping a temporary record of your customers and visitors for 21 days, in a way that is manageable for your business, and assist NHS Test and Trace with requests for that data if needed."

Just what customer details should be kept - and how - is unclear.

But the government promises to work with the industry "to design this system in line with data-protection legislation and set out details shortly".

For restaurants and the posher sort of pub where you can book a table for a meal, this should not pose too much of a problem.

They are likely to have a system already in place to record customer details.

They will simply have to tinker with it to make sure it collects everybody's name, not just that of the person paying.

But for thousands of old-fashioned boozers - the kind you wander into for a quick pint - it is going to be a lot harder.

They may struggle to set up a reliable process to log their customers.

And the result could be a major shift in pub culture.

Seeing an opportunity, dozens of app developers and payment platforms are rushing to offer services to pubs and restaurants as they prepare to open up.

And I have asked three of them to imagine how their systems would work for a casual drinker dropping by on a whim.

It has already been helping dozens of cafes keep going during the lockdown by offering takeaway services.

He is now adapting the app to pubs.

But it became clear during our discussion it would involve customers ordering in advance and identify only the person paying, not the others who might have been stood a round.

And he is now adapting it for pubs, as PubsVP.

Again, it envisages a world where you book in advance to visit a pub.

But it is flexible enough to add extra names into the system if you bring along a couple of friends.

And you do not have to download the app.

You can just visit a website to enter details.

But what about data protection, which the information commissioner has warned will need to be considered by pubs and restaurants storing customer details?

Mr Mallows admits it is going to be complicated, with some data held by both the pub and his company.

But he aims to give customers a guarantee data will be deleted after 21 days.

The simplest approach I came across was from a company called Eagle Eye.

And it depended on QR codes, a method already adopted in New Zealand.

Chief sales officer Al Henderson tells me what my customer "journey" would look like.

"You turn up at the Dog and Duck, scan a QR code at the venue, which takes you to a website where you complete your details, first name, last name, phone number, email address," he says.

Then, I receive my own QR code via phone, SMS or email - and use it when I pay.

Pubs will have more data on customers who agree to receive marketing messages.

But a close eye will be kept to ensure those who don't want to be contacted have their details wiped after 21 days.

Landlord Peter Dunn says Ye Old Vaults, a city centre pub in Ashbourne, Derbyshire, used to thrive on Sky Sports events and live music, "neither of which we can have now".

And he can't see some of his regulars being willing to fill in a form.

But Mr Dunn, who also does a bit of web development, does have an idea of what would work - the government's contact tracing app that was shelved last week.

"Licensees do enough work for the government, policing the under-age drinking and stuff like that, without loading us up with that as well," he says.

"So that's a job that an app could do far better than getting landlords to take personal information off their customers."

If the NHS-branded Covid-19 app had been rolled out by now and landlords had demanded drinkers proved they were using it before they were allowed in, you can imagine there would have been quite a row over privacy.

But instead, the technology of contact tracing is effectively being privatised and made the responsibility of the publicans.

And you can understand why they're not raising a glass to that.
#COVID-19  #Covid
Add Comment