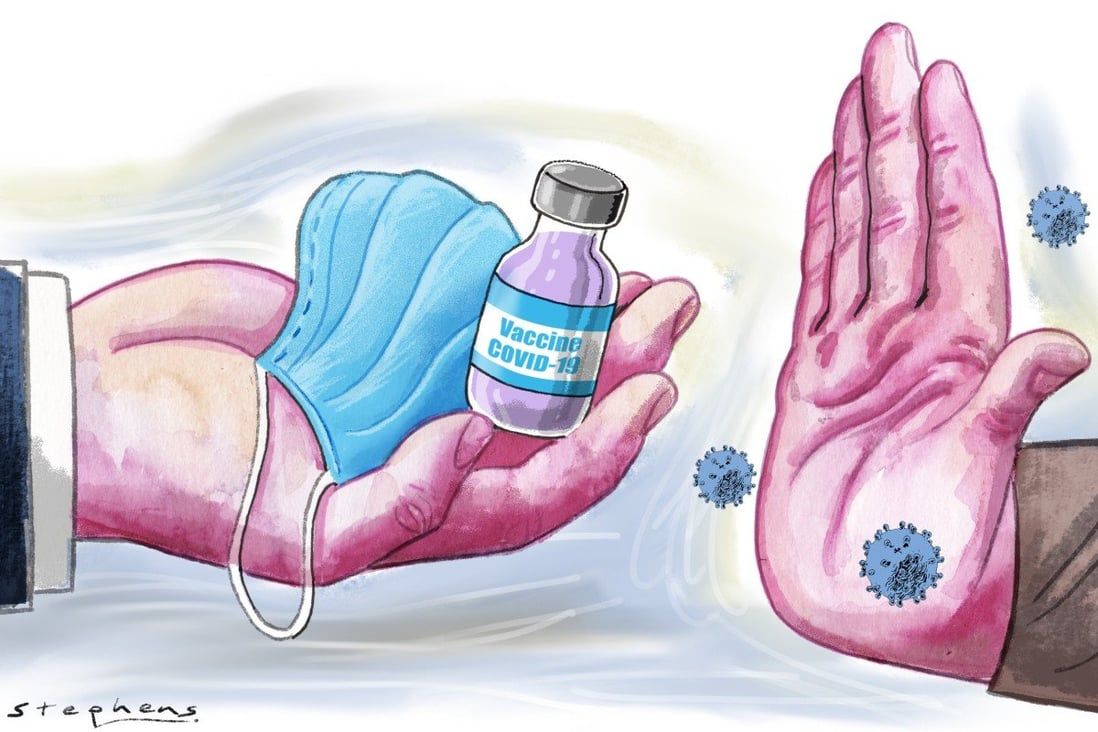 Hong Kong’s performance in handling the pandemic is admirable on a global scale but anomalous compared to its peers in East Asia. Several factors have been suggested as explaining the city’s unusually high number of deaths, but the evidence points to poor levels of public trust.

What has become increasingly clear across the world since the outset of pandemic is that national policy is seldom the prime factor in determining Covid-19 levels. Income per head and consequent age distributions are of particular statistical significance.

Generally, rich nations have had far more cases of Covid-19 than other countries. Europe and the United States represent about 15 per cent of world population but have contributed more than 50 per cent of global Covid-19 cases. The exception to this grand global divergence remains high-income East Asia with its low overall Covid-19 case numbers.

However, in focusing on Hong Kong we might say that while the city has been more effective in fighting the pandemic than Europe and the US in general, its performance within East Asia is not exceptional.

Hong Kong’s registered deaths per million from Covid-19 stand at about 1,370. This is significantly high within East Asia, where the range of the other four advanced East Asia economies excluding mainland China lies between 302 and 557. 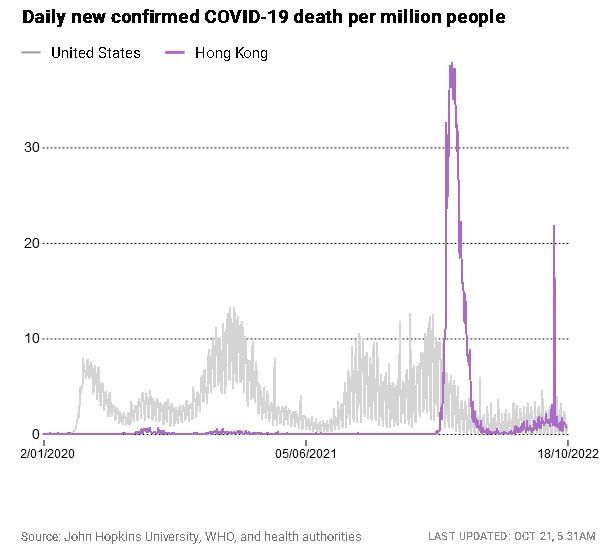 Factors that could raise any society’s Covid-19 mortality levels include levels of income, population density and pollution, obesity levels, and political unrest and uncertainty. Hong Kong’s urbanisation is at 100 per cent, and its population density was 7,125 people per square kilometre as of 2020.

This compares with population densities of 7,919 for Singapore, 652 for Taiwan, 531 for South Korea and 346 for Japan. High density and the likelihood of quick virus diffusion could help explain the rises in both Covid-19 cases and mortality in Hong Kong.

Air pollution is a more likely candidate as expert claims have been made regarding a positive relationship with Covid-19. Even as early as 2020, the World Air Quality Report summarised that a “growing body of research suggests that people exposed to air pollution, particularly long-term air pollution, are more vulnerable to serious health impacts of Covid-19”.

Greenpeace’s air quality ranking placed Hong Kong as more polluted than Taiwan, Singapore and Japan. On a comparative basis within East Asia, it is feasible that high population density plus high pollution levels contribute strongly to the higher Covid-19 figures for Hong Kong. However, Singapore with its much lower mortality from Covid-19 has comparable levels of pollution and density.

A relationship between obesity and Covid-19 has emerged in research literature. The rich nations of Europe have exhibited both high obesity levels and high Covid-19 morbidity. In 2016, 13 per cent of the world’s adult population was considered obese. The comparable figure for the US was 37.3 per cent and for the European Union was more than 25 per cent.

Once again, rich East Asia and China do not conform. Adult obesity levels in 2016 were around 4.4 per cent in Japan, 4.9 per cent in South Korea and 6.6 per cent in Singapore. However, estimates put obesity levels in Hong Kong and Taiwan much closer to Western levels. This suggests that Hong Kong’s relatively high obesity compared to East Asia might have contributed to rising mortality. However, the contrary case of Taiwan suggests this is not a major factor. 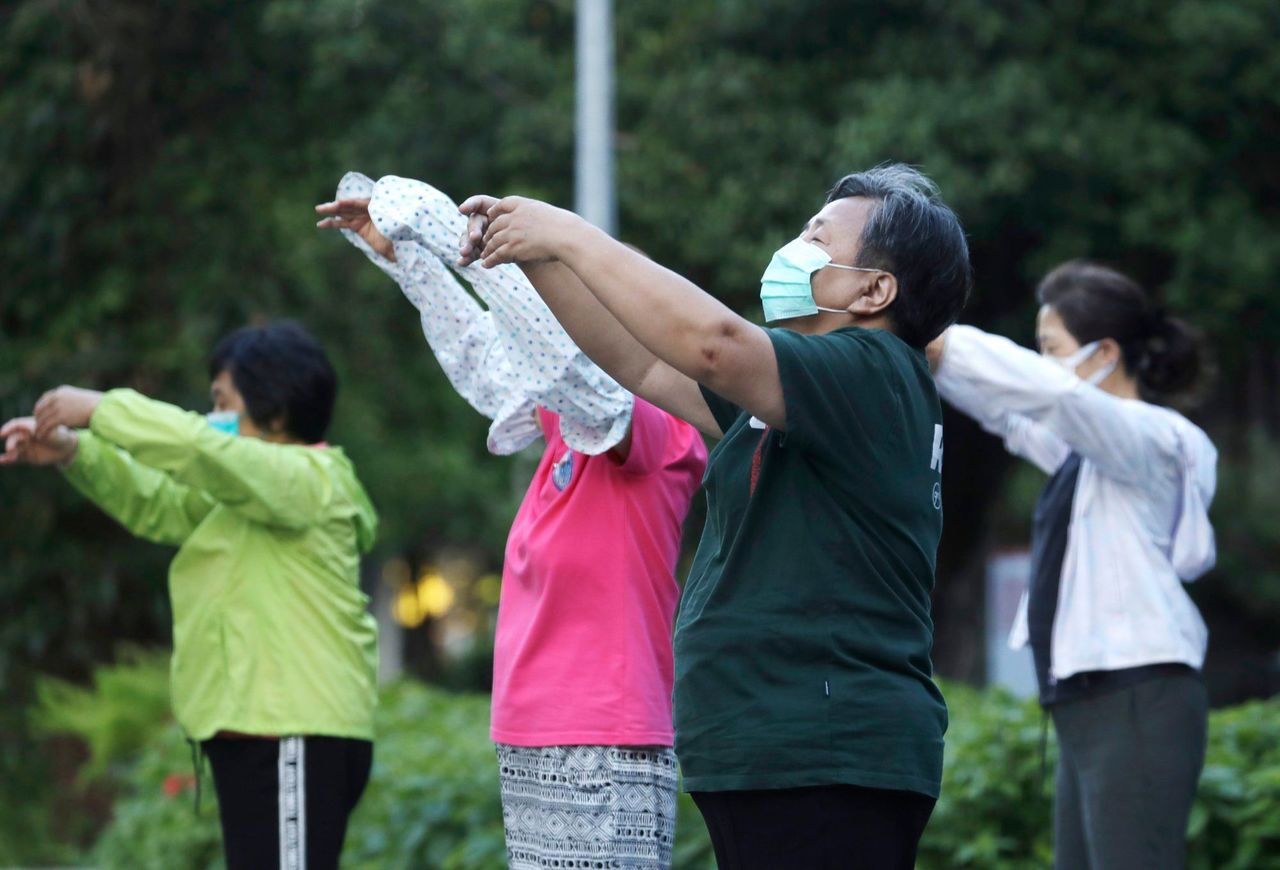 People take morning exercises at a park in Taipei, Taiwan, on September 28.

If these general, non-governance factors seem insufficient in explaining the sudden rise above the East Asia mortality level for Hong Kong, then we must turn to the possibility of either governance or civil society acquiescence as active factors. They are factors that could explain the change in Hong Kong’s relative pandemic fortunes in the last year or so.

In contrast, factors such as obesity, pollution or high population density have not altered in degree or character in the last 1,000 days, so they can hardly explain the significant alteration to a higher mortality rate by themselves.

The clue could lie in the mortality rate and the timing of its increase. The peak of deaths in wealthy nations outside Asia last year is well-known – January 12, 2021 for the US, January 14 for Germany and January 21 for Britain.

However, the peak period of daily confirmed new deaths attributed to Covid-19 for Hong Kong was from February to May this year, with the peak coming around mid-March.

East Asia generally had late peaks of mortality. For instance, deaths in Taiwan rose sharply from just 968 on May 13 to almost 12,000 as of October 17. But in the general period of rising mortality in East Asia, Hong Kong rose the most to overtake Taiwan and Singapore.

This happened at a time when vaccination was rolling out in East Asia generally. While most other East Asian economies were fairly calm in the lead-up to the pandemic, in Hong Kong the lingering effects of the civil disturbances and political unrest of the preceding years compounded to reduce trust in the government.

East Asian countries generally reached 80 per cent of their population having at least one Covid-19 vaccine dose between August 2021 and January this year, but in Hong Kong it took until late February.

Political distrust and social alienation affected both young and old, with both groups becoming dominated by vocal groups rejecting government advice and regulations for reasons that did not centre on the efficacy of the vaccines, whether they were Chinese or otherwise. Political doubts rather than medical doubts might have ushered in this late period of rising mortality in Hong Kong.

The failure of civil acquiescence generated a rejection of vaccines and other anti-pandemic provisions that allowed other embedded factors such as obesity and pollution to work in raising mortality levels to those above what would be expected for East Asia. It was not so much a failure of policy as a growing divergence between government and civil society. The later, speedy action by the government to increase vaccination was too late to prevent the rising morbidity levels.