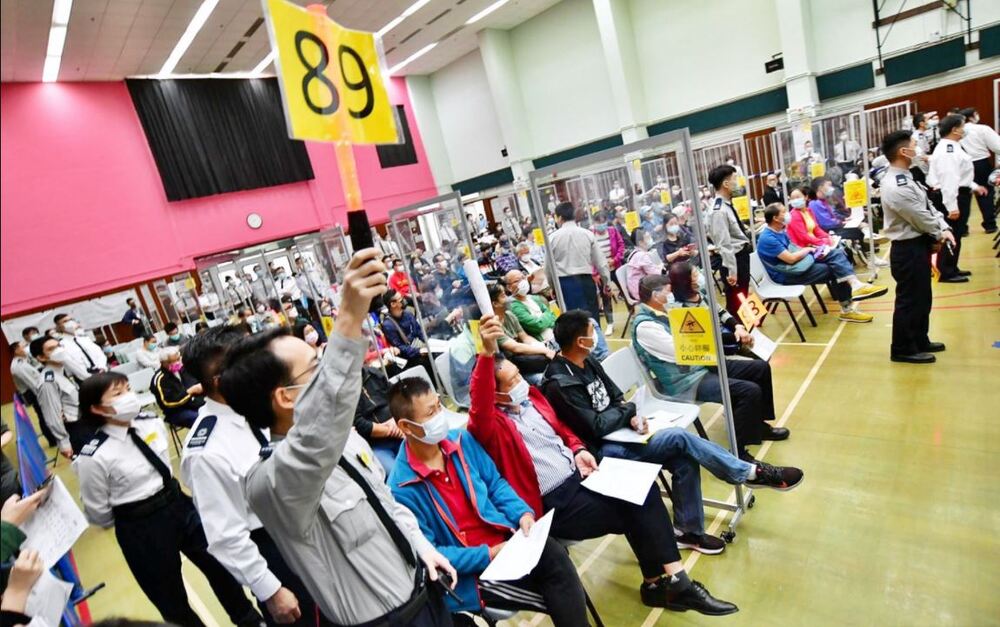 Next year's Lunar New Year fair stall auctions fetched HK$2.73 million on the first day, with the highest bid for a wet goods stall at HK$51,000.
The fair, to be held from January 26 to February 1 at Victoria Park, marks the second year of stalls not selling food due to the no-tasting rule amid the Covid-19 pandemic.

It also marks the third year of stalls not selling dry goods, with the Food and Environmental Hygiene Department citing safety concerns derived from the social unrest in 2019.

The department auctioned 175 stalls on Monday and today at the Lai Chi Kok Government Offices. The highest bid of HK$51,000 -- for No 119 stall in No 5 soccer pitch at Victoria Park -- was 9.4 times the opening price, the department said.

The department’s chief inspector, Benjamin Chow King-sze, said the department would dispatch more staff to help paste QR codes at the fair’s entrance, which visitors need for scanning with the LeaveHomeSafe mobile app.

"I believe citizens are already familiar with using the mobile app, and I don’t think the requirement of using the app will discourage them from visiting the fair," he said.

As the auction drew enthusiastic responses, bickering among bidders flared up.

One stall received 35 bids before the deal was sealed.

"King of peach blossom" Lau Hoi-to, who managed to capture 12 stalls on Monday, said he had faith in the business at the fair next year.

"Citizens cannot travel due to the pandemic, so they will turn to expenditure to compensate the feelings of loss," he said.

In addition, the government handed out the HK$5,000 e-vouchers last month, so I expect to see more visitors spending at the fair with the vouchers."

He thought that the price of his flowers would surge by 50 percent if the weather was to turn cold and affect the their growth.

"King of orchids" Yeung Siu-lung, who originally planned to bid for four stalls, said he could only get one on Monday.

"Responses to the auction were more fierce than I had imagined," he said.

"Once there was one person shouting his bid, another person then ramped up his bid."

He admitted that he was running low on funds due to the pandemic, and therefore did not aim to bid more for the stalls.

"I bid 16 stalls last year, but will not bid for as many this year due to the decline in the number of workers," he said.

"The pandemic is a huge blow to our business."

A male bidder, who won No 50 stall at the park’s corner for HK$40,000, said the stall was spacious and the bid was a good deal.

"Competition for bidding at my stall was fierce. I didn’t mind ramping up my bid to avoid further competing with other bidders," he said.

Tam, who will join next year’s fair for the first time, said she bid for No 1 stall near the park’s Hing Fat Street entrance for HK$22,000.