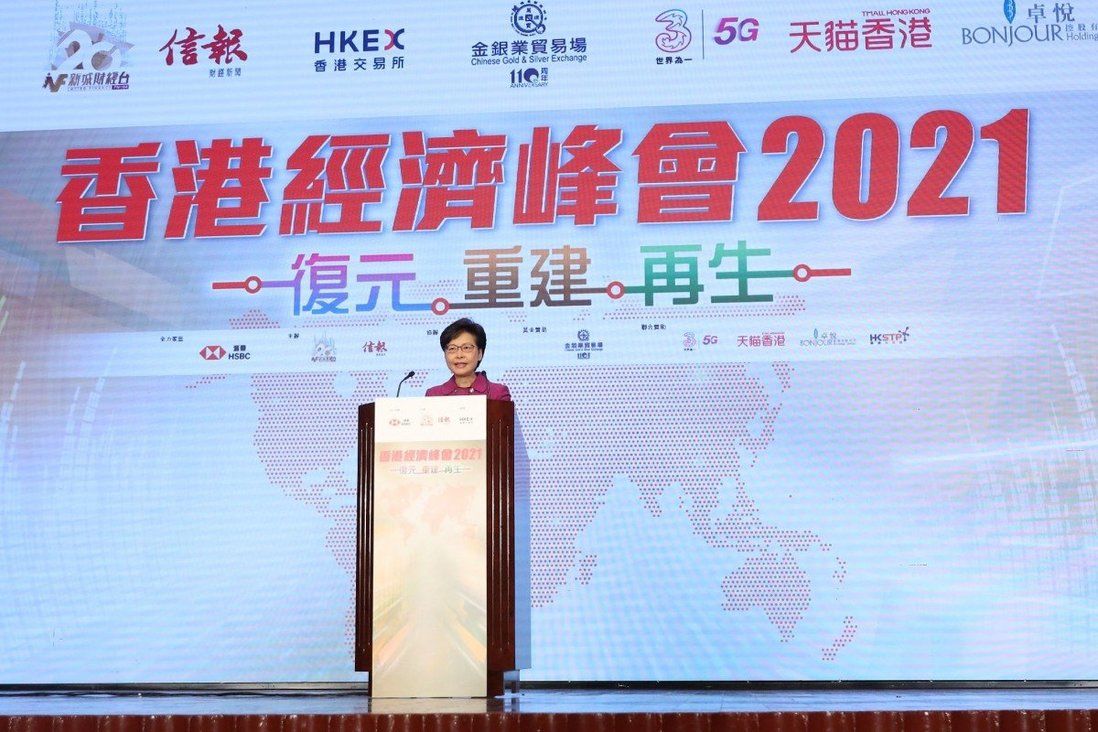 Failure to act in past to blame for Hong Kong’s woes, city leader says

Carrie Lam says power to improve system lay not only with chief executive and government but also individuals, whom she does not identify. She calls on residents to seize opportunities laid out in five-year plan and build upon city’s strengths.

Hong Kong’s leader has blamed “people in important positions” for long ignoring deficiencies in the city’s political system and allowing problems to fester and impede growth.

Chief Executive Carrie Lam Cheng Yuet-ngor also urged residents on Tuesday to seize opportunities offered by the latest national five-year plan under which Beijing pledged to support Hong Kong in boosting its traditional strengths in finance and develop the technology sector as a new driver of growth.

The central government had always been understanding and tolerant of Hong Kong in the hopes the city could identify problems with its politics and governance and take action, Lam argued.

“We did not fully implement ‘one country, two systems’,” she said, referring to the framework governing the relationship between Hong Kong and Beijing. “This is the city’s sickness and the root of our problems. In the past 20 years, not only the chief executives and the government had the ability to improve the system. Many people, in important positions, could also improve the system from their perspective. It was a pity that they did not see the problem or did not care about it.”

Lam served as chief secretary from 2012 to 2017, and as the city’s No 2 official was in charge of a failed campaign to push a Beijing-decreed political reform package through the Legislative Council in 2015. The changes would have allowed voters to decide the chief executive from a pool of two or three candidates picked by the Election Committee, an arrangement pro-democrats refused to endorse.

The Post has reached out to Lam’s office for clarification on her comments.

Former legislator Ronny Tong Ka-wah, currently an adviser on Lam’s de facto cabinet, said the chief executive might have been referring to the opposition camp.

“I don’t know who she was talking about. But she was right because in the past, even if the chief executive and the central government wanted to reform the political system, nothing could be done if the pan-democrats and civil society could not reach a consensus with them,” he said. “The pro-establishment camp’s role was less important. Even if they agreed with the reform, they could not replace the pan-democrats in reaching the two-third majority to pass the package in Legco.”

But former Democratic Party chairwoman Emily Lau Wai-hing said the city’s tycoons and Beijing’s advisers in the pro-establishment camp were to blame for the impasse.

“How could it be us?” she said. “The pan-democrats only voted down the package in 2015. But we have been urging the government to reform Hong Kong’s political system and it did not listen. It was the business, professional and political leaders in the pro-establishment. They could meet Beijing officials and had the power to turn things around. They need to share the blame with Lam.”

Speaking later in an online economic forum, Lam said that after the central and local governments completed an overhaul of the electoral system
, Hong Kong would enjoy political and social stability.

“[That will be the time] to focus the city’s energy on moving forward, otherwise as President Xi Jinping warned in 2017, an opportunity missed is an opportunity lost,” she warned. “Hong Kong needs nutrients to support a real recovery [from the Covid-19 pandemic], and the nutrients we have are not bad at all. They include our strengths in the rule of law … our financial regulatory regime and an open and free economy.

“So we have good foundations and policies, but if the people’s heart still hasn’t returned [towards mainland China], if people still resist the central government, if a small minority still destroy the relationship between Hong Kong and mainland China, and smear Beijing-related issues, I am afraid that we will not be able to make good use of the measures and implement them.”

China’s top legislative body, the National People’s Congress Standing Committee, is scheduled to meet on Monday and Tuesday next week to scrutinise details of the revamp, which aims to ensure “patriots” firmly hold the reins of powers.

The changes require amending annexes I and II of the Basic Law, the city’s mini-constitution, that stipulate rules for the chief executive and Legislative Council elections. The 1,200-member Election Committee that is responsible for deciding the city’s leader will also be expanded by 300 members to 1,500, further cementing the pro-establishment camp’s domination of the body.

The revamp will also give the committee new powers to nominate Legco candidates and elect the biggest share of members to the legislature, which will increase from 70 seats to 90.

Lam said she was glad the standing committee was meeting to discuss details of the electoral changes.

“We will work under this very tight timetable to implement the changes to annexes I and II of the Basic Law that the standing committee hopes to approve,” she said.

More than 20 laws and pieces of subsidiary legislations must be amended to accommodate the central government’s overhaul of the political system, and Lam vowed to ensure lawmakers would have sufficient time to scrutinise the changes.

“It is mostly pro-establishment legislators in the legislature, but I do not think they don’t need time to scrutinise, or could just decide to approve the bill within a short time,” she said. “An objective of our work is to create the maximum amount of time for lawmakers to scrutinise this bill and to perform their constitutional duties.”