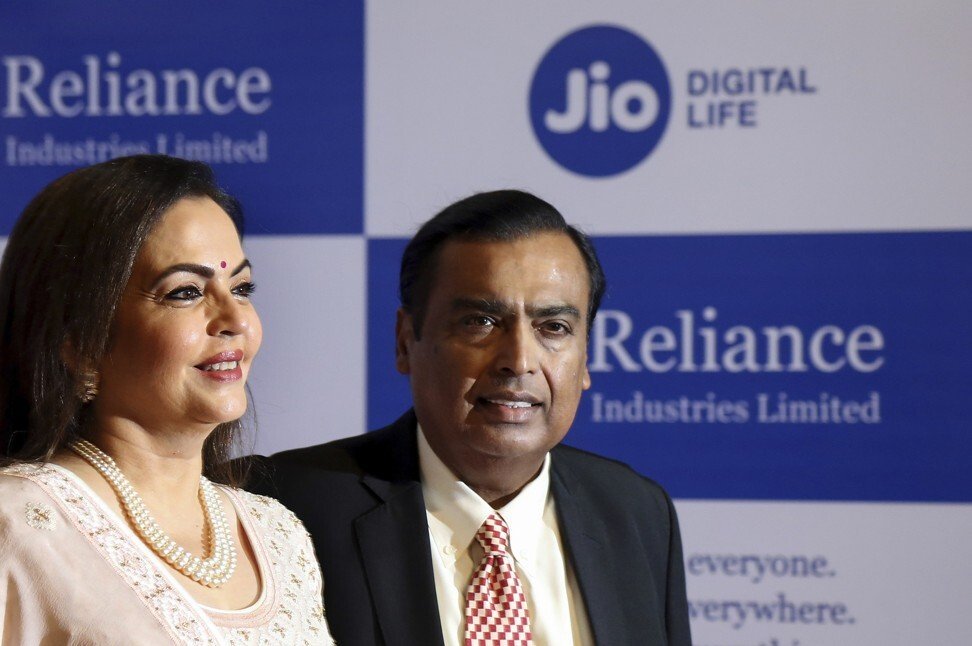 The world’s largest social media company will pay US$5.7 billion for a 10 per cent stake in Jio Platforms, a unit of India’s Reliance Industries. The deal would allow Facebook to step up its expansion in a country that is rapidly embracing online payment and e-commerce

Facebook will invest US$5.7 billion in the digital assets controlled by Asia’s richest man, Mukesh Ambani, marking the social networking giant’s biggest deal since its 2014 purchase of WhatsApp as it seeks a broader foothold in its biggest global market.

Facebook will buy about 10 per cent of Jio Platforms, becoming the largest minority shareholder of the Indian firm, Ambani’s Reliance Industries said in a statement on Wednesday.

Separately, Facebook said the deal would bring together JioMart, an e-commerce venture of Ambani, and its WhatsApp platform to enable people to connect with businesses.

Shares of Reliance Industries jumped 10 per cent on Wednesday in Mumbai, helping the Indian tycoon reclaim the title of Asia’s wealthiest person from Alibaba Group Holding founder Jack Ma. The rally compares with the 2.4 per cent gain in India’s benchmark S&P BSE Sensex index. Alibaba is the parent firm of the South China Morning Post.

Jio Platforms, a wholly owned unit of Reliance Industries, brings together Jio’s digital apps, ecosystems and the wireless platform offered by telecommunications carrier Reliance Jio Infocomm under one umbrella, according to the Mumbai-based company. The deal values Jio Platforms at a pre-money enterprise value of about US$66 billion, the Indian company said.

The partnership with Jio would let Facebook chief executive Mark Zuckerberg step up his expansion in a country that is rapidly embracing online payment and e-commerce as more people get smartphones.

Jio Infocomm burst onto the Indian wireless market about four years ago, quickly moving into a position of dominance by offering free plans and undercutting rivals.

Working with Facebook would be a boost to the ambitions of Ambani, who has been remaking his energy conglomerate as India’s first titan of e-commerce.

“India is a special place for us,” Zuckerberg said in a video posted on Facebook. “We’re also committing to work together on some critical projects that we think are going to open up a lot of opportunities for commerce in India.”

The Jio Platforms deal is an unusual bet for Facebook, which typically buys into media and online properties. It underscores the potential the company sees in India, which unlike China is an open market with an exploding smartphone population.

Facebook may benefit from a well-connected ally in the country, where its WhatsApp is trying to launch a payment service but has run afoul of regulators over fake news and privacy concerns.

Zuckerberg has long aimed to roll out a digital currency as well as tools that let users make payments and buy and sell products over the social network’s messaging services in India.

With its half-billion internet users, India is an alluring market for the world’s largest technology companies, including Amazon.com, Apple, Microsoft Corp and Alphabet’s Google. In India, Facebook has about 250 million users, while WhatsApp has over 400 million.

While India will be a testing ground for WhatsApp payment services – currently in pilot – Zuckerberg is also separately looking at the market for his cryptocurrency project called Libra. Zuckerberg has said that payments and commerce are a priority, representing a major business opportunity for the company moving forward.

For Ambani, 63, the deal with the US technology giant is a boost as his group battles the impact of the coronavirus pandemic and a slump in demand for crude oil. He has also been seeking to reassure investors that he will honour a pledge to reduce the group’s net debt to zero.

“The collaboration with Facebook will give Jio a significant advantage on product and technological fronts to keep competitors miles away and grab a larger wallet share of consumers across domains – telecoms, payments, retail,” Himanshu Shah, an analyst at Dolat Capital Market, wrote in a research note.

The Indian company spent almost US$50 billion – mostly borrowings – to build Jio Infocomm, the mobile carrier, leading to a net debt of more than US$20 billion as of March 2019. In August, Ambani told shareholders that he planned to sell a stake in Reliance Industries’ oil-and-chemicals division to Saudi Arabian Oil Co as part of a road map to cut net debt to zero by March 2021.

With the Aramco negotiations dragging on for months, the global health crisis and the crash in oil prices have also raised doubts if that deal will be signed. As a result, shares of the Mumbai-based conglomerate plunged as much as 45 per cent from their December 19 record high, before rebounding from their March 23 low.

After building a wireless carrier and a retail business, Ambani has said he plans to rope in “leading global partners” before initial public offerings, as he readies an e-commerce business, called JioMart, which would rival Amazon and Walmart in the South Asian country.

In a statement delivered by video, Ambani said the tie-up with WhatsApp will help almost 30 million Indian family-run store owners to take digital payments from customers in their neighbourhoods.

“This means all of you can order and get faster delivery of day-to-day items from nearby local shops,” he said.
Simultaneously, Jio Platforms, Reliance Retail and WhatsApp have also tied up to help accelerate the retail unit’s e-commerce push on the JioMart platform, Reliance Industries said in the statement.

The new businesses are likely to account for 50 per cent of Reliance Industries’ earnings in a few years, versus a little more than 32 per cent now, Ambani told shareholders in August.

Reliance Industries and Facebook denied an Indian media report last week that they are considering creating an app similar to WeChat, the Chinese mobile messaging and payment service run by Tencent Holdings.

“The intent is not to build another app, the intent is really for the two companies to collaborate,” said Ajit Mohan, vice-president and managing director for India at Facebook.

Now that the deal has been formally announced, the companies will start working with Indian regulators to seek approval, said Anshuman Thakur, Jio’s head of strategy.

Facebook has not been consistently welcomed by Indian regulators. It ran into opposition while trying to launch a payments feature inside WhatsApp in 2019, and has also faced resistance around content regulation on the app, which is encrypted.
Facebook tried – and failed – to bring a service to India in 2015 called Free Basics, which would have made some internet services, including the social network, free to use on mobile devices. Critics said the app violated the concept of net neutrality by prioritising some services over others.

“Given the intent of this collaboration and the nature of this partnership, we expect people to be welcoming,” Jio’s Thakur said.