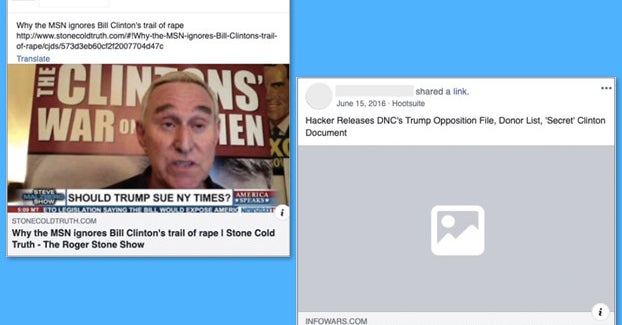 The social media company said four different networks of accounts were removed for inauthentic coordinated behavior.
Facebook announced it removed hundreds of fake accounts attributed to four different information operations on Wednesday. Two of the operations were tied to professional PR or advertising firms, and one of them was connected to former Trump adviser Roger Stone. According to the company, the four operations spent over $3.5 million on advertising.

The network associated with Stone consisted of 50 Facebook pages, 54 accounts, and four Instagram pages. It was also associated with the Proud Boys, a far-right men’s rights group that the social media company banned in 2018 for breaking “policies against hate organizations and figures.”

According to the release, people in the network posed as Florida residents and made “their own content to make it appear more popular than it is.” It spent about $308,000 on ads and purchased fake followers from Pakistan and Egypt.

Stone’s own account was suspended, but he denied involvement with the network in a statement to the New York Times.

"This extraordinary active censorship for which Facebook and Instagram give entirely fabricated reasons,” he told the paper, “is part of a larger effort to censor supporters of the president, Republicans and conservatives on social media platforms."

Although Facebook doesn’t provide data on all content promoted by the Stone-affiliated fake accounts and pages, the provided screenshots from 2016 show that the network posted articles from Infowars, Stone’s personal website, and left-leaning watchdog Media Matters.

“The Page admins and account owners posted about local politics in Florida, Roger Stone and his Pages, websites, books, and media appearances, a Florida land and water resources bill, the hacked materials released by Wikileaks ahead of the US 2016 election, candidates in the 2016 primaries and general election, and the Roger Stone trial,” the release said.

The takedown reached around the world, affecting three separate networks that were centered in Ecuador and Canada, Ukraine, and Brazil.

Two other networks that were removed were affiliated with professional firms, continuing a trend of professionalization of disinformation. One, a PR firm connected to Canada and Ecuador called Estraterra, spent about $1.38 million on ads on the platform. Another firm, an advertising agency in Ukraine that “was particularly active during the 2019 presidential and parliamentary election,” spent about $1.93 million.

The Ukraine network previously faced takedowns for hate speech and impersonation. It was run by Postmen DA, an ad agency that describes itself as “the most effective digital agency."

Roberto Wohlgemuth, Estraterra's founder and CEO, told BuzzFeed News that Facebook did not notify him of the takedowns, which the social network said involved “41 Facebook accounts, 77 Pages, and 56 Instagram accounts.”

"The rise of social media provided this incredible opportunity to center diverse voices — those that have been historically marginalized from public debates and conversations. Unfortunately, this announcement from Facebook simply reiterates its own capture by the same elite powers," Wohlgemuth said in an emailed statement to BuzzFeed News. "Estraterra will continue to advocate for not only our freedom of expression but also our freedom from being silenced."

Although Wohlgemuth’s firm is based in Canada, the network didn’t target the country, according to the Facebook release. It instead focused on Ecuador, Venezuela, and Chile. Wohlgemuth’s LinkedIn page says he is a former senior adviser to the Ecuadorian president “on matters of strategic and political communication.”

“British Newspaper Financial Times asks for an end to sanctions against Venezuela,” said one sample Instagram post released by the company. The post got six likes.

“It is false that in every year that ends in 20 of each century there is a new pandemic,” said another Instagram post attributed to the network, which was even less popular with three likes.

Some of the accounts removed were attributed to a network in Brazil, which targeted audiences in that country. In this case, pages pretended to be news outlets while spreading criticism of Brazilian President Jair Bolsonaro’s political opposition. According to Facebook, this activity was attributed directly to Bolsonaro, his two sons, and the right-wing Social Liberal Party.
Add Comment