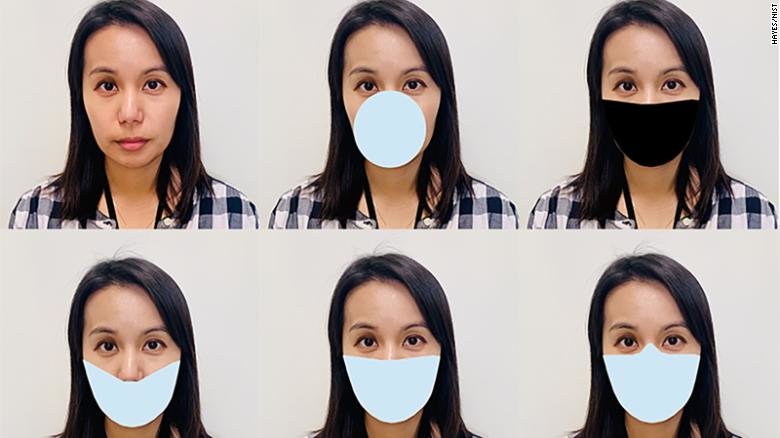 Face masks are already known to stop the spread of coronavirus. Apparently, they can also make it much harder for facial-recognition software to identify you, too.
This is the key finding of a new report released Monday from federal researchers at the National Institute of Standards and Technology, or NIST, which is a branch of the US Commerce Department whose functions include measuring the accuracy of facial-recognition algorithms that companies and researchers submit to the lab.

When tasked with matching a picture of a person wearing a digitally added face mask to a different photo of the person without one, the most accurate facial-recognition algorithms failed to make a correct match between 5% and 50% of the time, according to the report. Generally speaking, most of the algorithms tested had failure rates of between 20% and 50%, Mei Ngan, a computer scientist at NIST and an author of the report, told CNN Business.

The identification issues make sense, as facial-recognition systems typically work by comparing measurements between different facial features in one image to those in another. Blocking off part of the face means there is less information for the software to use to make a match.

It highlights a unique challenge the tech industry is already working to confront as the pandemic continues. While the technology is controversial, with a number of companies recently rethinking providing this technology to law enforcement, it's used in a range of products and services, from using your face to unlock your smartphone to passing through a security checkpoint.

For their report, the researchers created nine different black and light blue mask shapes to account for the ways mask shapes vary in the real world and used them to hide part of a person's face in a photo. They then compared a digitally masked photo of each person with another, unmasked photo of the same person. They also conducted a test of the algorithms on both sets of photos with no virtual masks.

In all, they tested 89 algorithms on more than 6 million photos featuring a million different people. The photos came from two sources: applications for US immigration benefits, which were used as the unmasked images, and photos of travelers crossing a border to enter the US, which were given a digital mask.

An obvious shortcoming of the report is that NIST didn't test the algorithms on images of people who were actually wearing masks — Ngan said the digital approximations of masks were used due to time and resource constraints. On the plus side, it allowed researchers to quickly get a sense of the effect of masks on the algorithms, but real masks fit differently on different people. It's still unknown how texture or patterns might affect accuracy of facial recognition software.

"That's something we want to look at," Ngan said.

Some companies have said their facial-recognition technology can work with masks, and Ngan said she's heard from developers who are working on algorithms meant to make this possible — perhaps by training an algorithm with lots of images of people wearing actual masks, or by targeting the region of the face above the middle of the nose.

That's a focus for Marios Savvides, a professor at Carnegie Mellon University who studies biometric identification. He said a person who's wearing a mask can be essentially invisible to a facial-recognition system, as it doesn't even detect a face in the first place. He thinks the region of the face that includes the eyes and eyebrows tends to change the least over time, which makes it a good part of the face to use when trying to identify a person whose mouth and nose are hidden.

The NIST report is the first of several that the lab plans to issue about how facial-recognition algorithms identify masked faces. In the fall, Ngan said, NIST expects to release a report on the accuracy of algorithms that were specifically created with the intention of spotting people in masks.
Add Comment