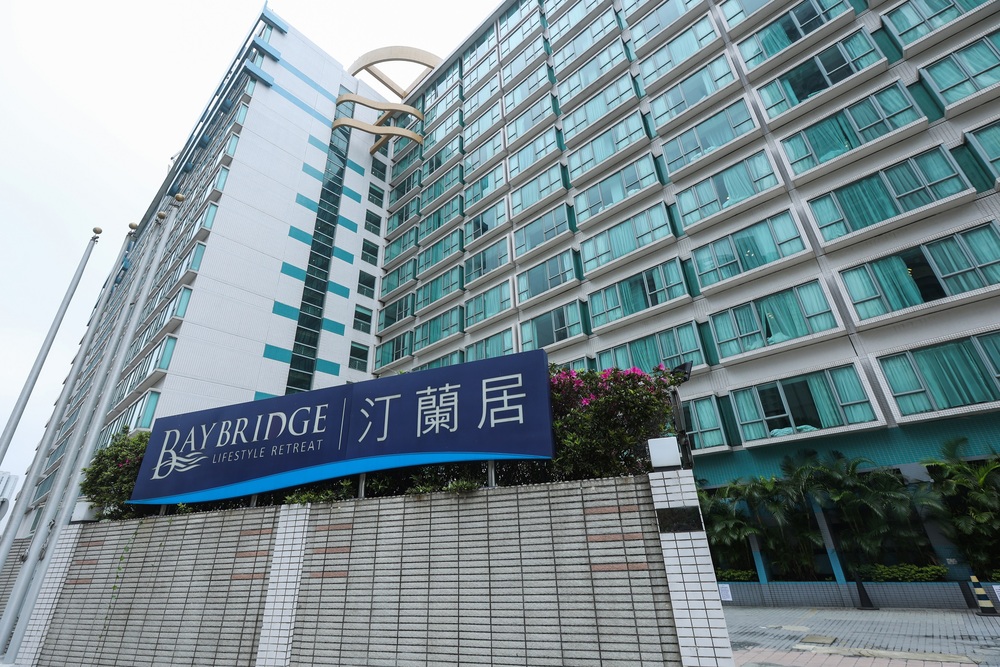 A dozen long-term residents at Bay Bridge Lifestyle Retreat in Tsuen Wan, who earlier were asked to vacate their flats after the hotel has turned into an isolation facility, had agreed to resolve the dispute with the hotel which offered them double rent payment as compensation.
This means that residents who still have six months left on their lease will receive rent for 12 months as compensation. It is understood a tenant got over HK$200,000 compensation.

Early this month, the 12-story hotel with over 430 rooms requested all residents to move out by March 15 when the hotel would be used as a designated community isolation facility for Covid-19 patients.

Long-term residents living in some 130 rooms criticized the hotel for offering to pay only one month’s rent as compensation at the time and forcing them to move out by cutting off the water and electricity in the rooms. They even hired lawyers and called the police for help.

The hotel on Saturday offered to pay double rent payment as compensation to settle the dispute. It will also pay the legal fees for long-term residents who hired lawyers.

One of the residents, Cheung, who has lived in the hotel for six months, said he is satisfied with the current compensation plan offered by the hotel.

He said his rent was HK$14,000 per month and only one month left on his lease. Therefore, he will receive compensation of at least HK$28,000.

Another resident, Fung, said her rental lease with the hotel was supposed to expire in October this year. Fung rented a 300 square feet sea view room with a parking space and her rent was also HK$14,000 per month.

Since the hotel has turned into an isolation facility, Fung had to move to a nearby hotel with much higher rent.

Fung also said the hotel’s decision to offer double rent payment as compensation was reasonable, but she did not reveal the exact amount of money she received.

Both Cheung and Fung checked out from the hotel on Monday.

Jacob Lau Ka-ho from the Tsuen Wan Citizen Party on Tuesday said more than 10 long-term residents at the hotel have required the hotel to pay the rent for the remaining term of the tenancy agreement, as well as the price difference caused by renting other nearby hotels.

Lau said one of the long-term tenants has a remaining lease term of 12 months and is expected to receive a compensation of HK$250,000.

There are also a dozen short-term residents still waiting for the hotel’s compensation arrangement and they have also consulted lawyers, Lau said.
#COVID-19  #Covid
Add Comment