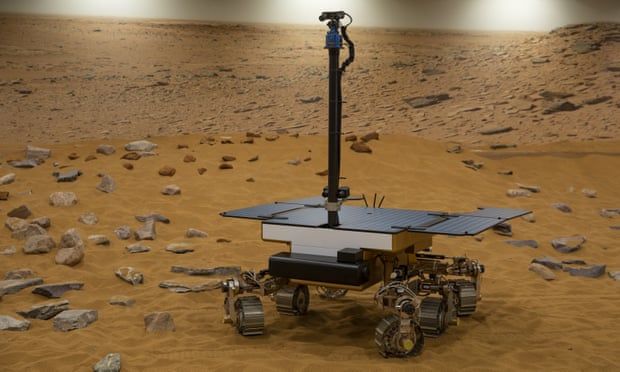 The ESA has commissioned a study of how to get ExoMars off the ground without Roscosmos involvement
The European Space Agency has suspended its €1bn (£844m) ExoMars mission, a joint project with Russia that was due to launch a robotic rover in September. Member states of the ESA voted on Thursday to cancel the launch because of the Russian invasion of Ukraine.

“The decision was made that this launch cannot happen, given the current circumstances and especially the sanctions that are imposed by our member states,” said agency director general Josef Aschbacher. “This makes it practically impossible, but also politically impossible to have a launch of [the rover] in September.”

The Mars rover, named Rosalind Franklin, was assembled in the UK for a planned launch onboard a Russian rocket. After travelling to Mars on a German-built spacecraft, it would have been shepherded to the surface by a Russian lander. Instead, the rover will be placed in storage for the foreseeable future.

The decision was viewed as inevitable but is a significant blow to Europe’s space programme. The next available launch window, based on the alignment of the Earth and Mars, will be 2024, but the technical and political issues may take longer than this to resolve.

The Esa has commissioned a feasibility study of how to get ExoMars off the ground without Roscosmos involvement. Working with Nasa is one option and Aschbacher said the US agency had expressed a “strong willingness to support” the mission.

Rosalind Franklin is the second stage of the joint European-Russian mission. The first part, a satellite called the Trace Gas Orbiter, was launched in 2016 and is studying the planet’s atmosphere. It was also supposed to act as a telecommunications relay for Rosalind Franklin when the rover arrived.

The rover was intended to drill 2m into the surface of Mars to look for signs of life. There are no comparable missions slated in the next decade and the rover should remain viable for several years in storage. However, keeping the mission alive is likely to add significantly to its more than €1bn price tag.

The Esa also said on Thursday that five satellite missions expected to be launched by Soyuz had been cancelled after the decision by Roscosmos to withdraw their personnel from Europe’s spaceport in French Guiana.

However, Aschbacher said that the situation aboard the International Space Station (ISS) – currently home to four Americans, two Russians, and one German ESA astronaut – remained stable. “Astronauts are working nominally. They are doing well and doing their operations as planned,” he said.

Earlier this week, Nasa confirmed that one of its astronauts will still share a ride back from the ISS with two cosmonauts aboard their Soyuz capsule later this month.
Add Comment