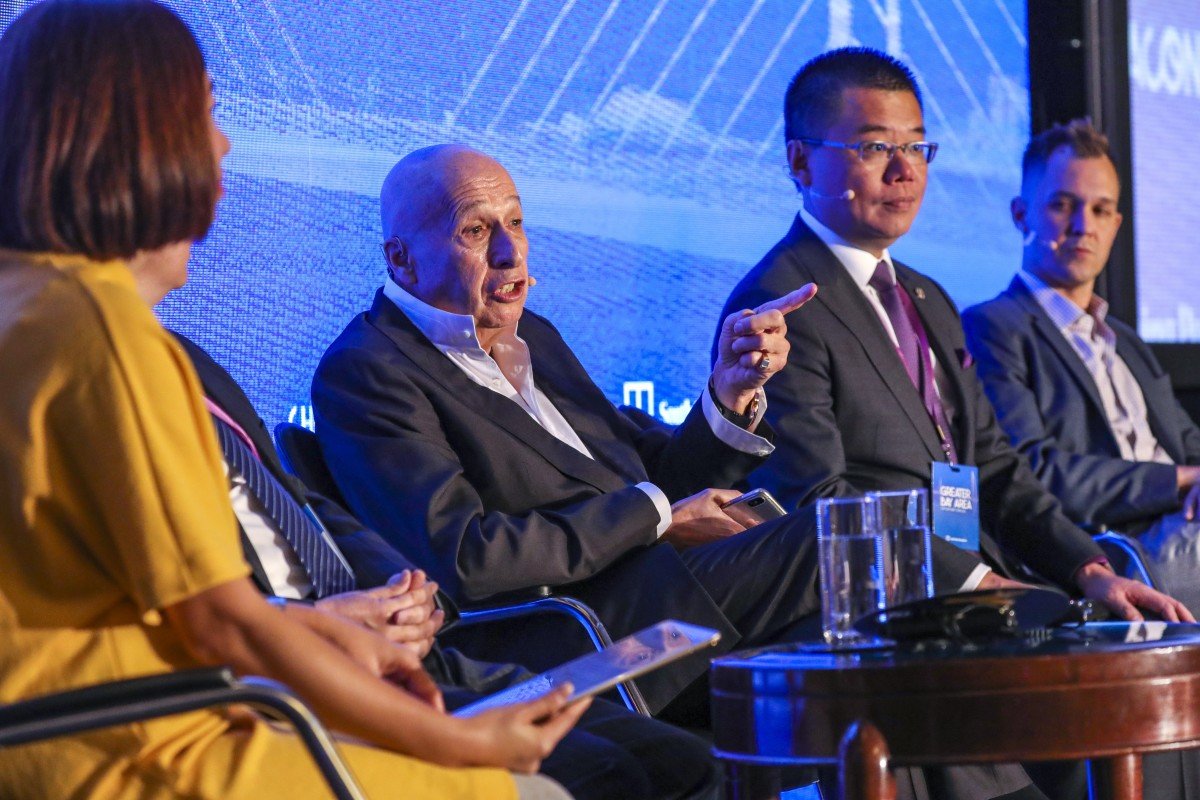 Enough opportunities for Hong Kong’s youth in Greater Bay Area, but it’s not the answer to the city’s problems, says Allan Zeman

Beijing needs one country, two systems as it has worked well so far, Allan Zeman says at the China Conference. Other participants in the panel discussion also say that Hong Kong’s youth must not be forced to seek work in the mainland

Hong Kong’s independent judiciary and regulatory framework give the city an edge in the Greater Bay Area and even though it offers enough opportunities for the city’s disenchanted youth, asking them to move to the mainland is not the answer to ending the social turmoil plaguing the financial hub, according to prominent businessman Allan Zeman.

“The legal system is different, the independent judiciary … has always been the strength of the financial services [in Hong Kong],” said Zeman, who has made his name famous through high-end restaurants and is a significant landlord in Central, during a panel discussion titled The competition conundrum at the South China Morning Post’s China Conference on Wednesday.

The discussion focused on competition between cities in southern China and how many Hongkongers, especially those taking part in the protests, had no desire to benefit from the opportunities in China and the Greater Bay Area.

“Beijing is going through a difficult time understanding what’s going on in Hong Kong. Normally Beijing likes to be in control, they like to know everything that’s going on. And in this case, somehow someone completely took their eye off the ball.”

The anti-government protests – sparked by the now-abandoned extradition bill – have rocked Hong Kong since early June.

“At the end of the day, Beijing will not give up on Hong Kong. Especially with the Greater Bay Area, this is a great chance for interrelations,” said Zeman, who is also the chairman of Lan Kwai Fong Group.

The Greater Bay Area, encompassing Hong Kong, Macau and nine mainland cities including Shenzhen, is the Chinese government’s scheme to turn the region into an innovation and financial powerhouse rivalling Silicon Valley and the Tokyo Bay Area.

Infrastructure projects, such as the high-speed rail linking Hong Kong to mainland China and the Hong Kong-Zhuhai-Macau Bridge, have brought Hong Kong and the Greater Bay Area closer together, according to Zeman.

But Zeman said that Hongkongers cannot be forced to go to China to find employment. “Organically you can provide opportunities for them in the Greater Bay Area. Young people only need a few business opportunities and one or two Hong Kong people [companies] becoming the next unicorn, and suddenly everybody follows,” said Zeman, referring to start-ups valued at a minimum of US$1 billion.

“That’s why Shenzhen is so important, because of the technology that they have,” he added.

Last week Beijing unveiled a detailed plan calling for wide-ranging reforms to be implemented in Shenzhen that will make the southern coastal city a leader in terms of innovation, public service and environmental protection by 2025.

Shenzhen, which borders Hong Kong to the south, will set up talent acquisition and immigration processes that will cater to highly skilled overseas workers. Hong Kong and Macau residents who work in Shenzhen, for example, would be given “citizen treatment” to enjoy local social welfare benefits.

Tony Verb, co-founder and partner of consultancy GreaterBay Ventures and Advisors, speaking at the same panel discussion, also said that Hong Kong’s youth should not be forced to cross the border to find work, but must be given incentives instead.

“It is the Hong Kong government’s role to take care of their young people. The government needs to make efforts to make their youth happier, give them opportunities and better education to prepare them for competition. This can only happen in Hong Kong,” said Verb.

Witman Hung, principal liaison officer for Hong Kong at the Shenzhen Qianhai Authority, noted that Hong Kong’s youth should neither be forced to cross the border, nor should they be encouraged.

He said that the Greater Bay Area was not suited for everyone from Hong Kong.

“Everybody is responsible for their own future. As community leaders, what we need to do is tell them what’s happening. We should present them the facts and opportunities. It’s their own decision,” said Hung.

“The Greater Bay Area has given us a lot of opportunities, but it’s not a solution to Hong Kong’s problems. We shouldn’t outsource our problems to our neighbours … but we can take advantage of the opportunities in our neighbourhood.”

Zeman however had the final word. “Shenzhen will be a good place to go for lunch,” he quipped.